Ongoing anti-shale gas protests in southern Algeria pit a well-organised, conscious population against a government that ignores or trivializes their concerns. 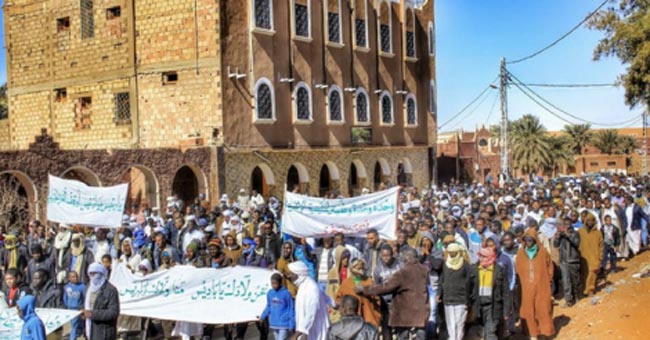 Despite the ongoing anti-shale gas protests in the province of Ain Salah in the great Algerian south, the Algerian government is pressing ahead with its shale gas development plans, according to Mr. Said Sahnoun, head of state-owned oil company Sonatrach.

On 8 February 2015, he announced at a press conference that shale gas drilling operations would continue at the Ahnet site in the province of Ain Salah. He also declared that the drilling apparatus would be transported to another exploration site in a few days time, without giving any details as to its location.

Angry and defiant, the people of Ain Salah responded on 11 February by taking the protest from the main town square (which has become known as ‘Place Somoud’ or Resistance Square) to the presumably experimental drilling site at Dar Lahmar, some 28 kilometers away from the town. They occupied the site, bringing the rig activities to a halt. Men, women and children formed a human wall around the site, some chaining themselves to electric poles.

On the same day, the activists successfully blocked the entrance to the ISG (In Salah Gas) site, in response to the provocative words of the head of the state oil company. Activists intercept delivery trucks to inspect any chemicals being delivered to the drilling site and have set up tents on the outskirts of the site.

The protests are looking more and more like a head-to-head confrontation between a well-organised and defiant population and the government, which continues to trivialize people’s expressed concerns and dismiss them as either the product of ignorance or foreign manipulation.

But the people of the south, who have historically been marginalized and considered uneducated, are giving a lesson to the whole country in responsible citizenship and peaceful resistance—to a criminal project that is threatening their livelihoods.

The organizers of the Ain Salah protests, namely the CHEMS (sun) network , cite the example of the all too recent period of French nuclear tests in Algeria in the 1960s, and the nuclear bomb detonated in the nearby town of Reggane on 1 May 1962, nearly three months before the declaration of independence.

These tests continued until 1966, years after the declaration of independence, and now, more than 50 years later, French multinationals are back in the region to experiment with fracking technology, bringing back the vivid and bitter souvenir of Reggane nuclear bombs.

France has declared an absolute ban on shale gas by constitutional law, but French companies such as Total and Shell are allowed by the Algerian government to explore and experiment on Algerian soil in yet another neo-colonialist adventure.

The Ain Salah movement has quickly spread to the provincial capital Tamenrasset and also Adrar as more opposition is rallied. In Ouargla, equally marginalized in terms of southern socio-economic development and infrastructure, despite it being the provincial capital to the oil and gas-rich area of Hassi Messaoud, protests have been held for the last few weeks. In the middle of the town’s marketplace, a tent has been erected as a centre for rallying opposition, holding debates and educational events. One of the powerful slogans put forward by the people of Ouargla is: “The people declared a moratorium on shale gas”

This without a doubt proves that local stakeholders, and especially the largely denigrated inhabitants of the south, can disrupt commercial operations and do in fact pose a serious and long-term problem for the Algerian government, if it wants to attract more foreign investors to the shale market.

In view of the decline in its gas export levels, notwithstanding that nonconventional hydrocarbon proceeds will only serve to offset the diminishing profits of conventional hydrocarbons, the rentier economy will be perpetuated and ensure the survival of the Algerian regime. Its everlasting dependence on hydrocarbons condemns the economy to the cyclical rise and fall of oil and gas prices.

This also raises the security issue for foreign players, especially following the tragic events at In Amenas in January 2013. With social explosions and discontent, violence could erupt.

The Algerian government, through its history of authoritarian rule, has considerable experience of the destabilizing backlash when they suppress protests, but anti-riot police trucks are stationed in and around the rig to stop protesters from disrupting the daily drilling activities. So far protests remain peaceful and police forces remain mere observers standing between the people and the drilling site.

Today the Protests organisers’ page announced that Mr. Abdel Kader Bouhafs a leading figure of this anti-shale gas movement in Ain Salah has received pressure and threats from Sonatrach officials. This gave the activists more cause for persevering with the standoff, as they pledged to continue the fight until a national debate is held and a moratorium on drilling is declared.

The Algerian government is not responding to the people’s demands and continues a poor communication campaign on the issue, with contradictory statements and blatant lies, seemingly waiting for the people to slowly tire out, abandon the cause and resume normal life. This would again be in line with the Government’s tactics to break the movement and continue its contempt of the people of the south.

The people of Ain Salah and Ouargla (and other towns of the Sahara) are proving to be determined more than ever, and are becoming a symbol of resistance and resilience, an inspiration for the people of Algeria and the towns that are next on the government’s shale gas agenda.

The organizers are calling for national mobilization and a nationwide anti-shale gas march on the 24 February 2015. This is a very symbolic date for Algeria, marking the 44th anniversary of the nationalization of hydrocarbons.

It will be a compelling call to assert their patriotism and their opposition to the regime selling off popular sovereignty and subjecting its people and environment to more deleterious experiments, and to multinationals trying to grab their natural resources.

With the assembly ban on the capital Algiers in place since 2001, if the call to march is answered there could be repression. The saga continues….

This article was originally published in the independent online magazine Open Democracy, under a Creative Commons Attribution-NonCommercial 3.0 licence.