Resistance to rapid industrialization and encroachment by poisonous industries has led to pitched battles between residents and police in many cities. 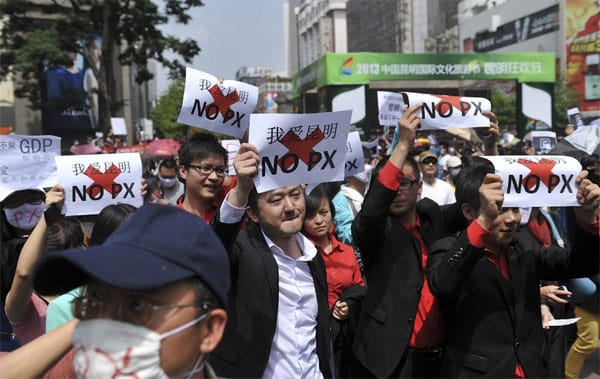 Anti-PX protest in the city of Kunming in 2013

In spite of a media blackout, protests in the Chinese city of Maoming against a PX (paraxylene) plant have proceeded for the past week. Last Sunday, a thousand citizens took to the streets in protest, followed a few days later by 20,000 occupying the area around the government building. Pitched battles between brick-hurling protesters and baton-wielding police have led to dozens of injuries.[1]

Protests have spread to other areas around the province of Guangdong, including Guangzhu and Shenzhen, where the 20 protesters who gathered were immediately hauled away by police.[2] The local government has proclaimed that it will not move forward with the project unless a social consensus is achieved, which indicates that the plant’s plans will be scuttled. As Chinese news site, Xinhua explains, the protests are a manifestation of “the quandary for a local government seeking a balance between development and stability.”[3]

This is not the first time that group events have struck Guangdong, among other provinces. In 2009, homeowners of Dongguan City began a protest campaign against a transformer substation and luxury business highrise. A few months later, hundreds protested a garbage incineration power plant in the village of Hujiang outside of Guangzhou City, leading to the project’s closure.

In 2011, hundreds of people from the town of Haimen in Guangdong occupied the government building, destroying the windows and office equipment in opposition to proposed power plants. Thousands then gathered at the toll station of the major local highway to gain control over crucial access points as 200 military police fired tear gas at them. Last year, ten thousand residents in the Ninshan District of Shenzhen City signed a petition against an LCD factory. The fight against PX today is a similar repetition of such past uprisings, but it bears deeper meanings when put in current context.[4]

A crisis of encroachment

The phenomena of such “group events” in China is little understood, yet it is impossible to consider the political landscape of that complex and enormous country without some kind of analysis of the dispersed mass rebellions taking place, not only in Guangdong, but throughout the whole country. These events typically involve hundreds, if not tens of thousands, of participants rising up against developers, industrialists, local governments, and police and security forces. They occur throughout China for a variety of reasons, not least among them being nationalist protest, land seizures, and pollution.

To many, China is a monolithic entity whose geopolitical presence functions in “real time.” While radicals view China as Russia’s land grabbing partner and liberals see China as a strategic lever to separate Russia from the international community, very little nuance is observed regarding China’s internal politics. When internal issues are analyzed by the pundits of West Europe, it is either to show the woes of China’s repressive state apparatus or nationalistic claims in East Asia. The US in particular watches China with an especially hawkish gaze.

Recent threats made by US diplomats against China’s ambitions in the South China Sea are revealing of the geopolitical relationship between China’s internal development and external diplomacy. China has engaged in disputes with the Philippines for years over certain “features” in the South China Sea — notably the Scarborough Shoal, which China took during a military maneuver, and the Second Thomas Shoal, which is strategically important for offshore hydrocarbon exploration. In warning China against executing a “Crimea-like” takeover of the Second Thomas Shoal, the US is taking note of China’s abstention from the UN Security Council’s condemnation of the Crimea referendum.

But China has no reason to join the US and Western Europe in its recent crusades. Chinese investors have lost billions of dollars through the power plays of NATO throughout Africa,[5] and the US has been known to fund separatist movements in China, just as it has done in Central Asia, in part to unseat Chinese economic interests.[6]

Yet there is a subtle irony in the interplay between China’s attempts at territorial expansion for hydrocarbon extraction on the one hand, and uprisings against petrochemical PX plants on the other. In general, they reveal the global unpopularity of land grabs and the problematic nature of the “accumulation by encroachment” that drives development. More specifically, they are connected to the process of accumulation behind the modern drive towards development, which is demanded by a contemporary geopolitical power struggle increasingly afflicting the entire world.[7]

Expanding the conversation on the global land grab

One commenter who has avoided the typical broad strokes that paint anti-Chinese portraits on the canvass of political analysis is Fred Magdoff, whose writings about land politics in China suggest more intricate historical developments at play.[8] Magdoff’s argument that China has joined the Global Land Grab through the gates of capitalist land seizures is crucial to understanding how Chinese economic policy — which is unique among the other “locomotives of the South” — fits into the universal drive for land.

The problem with Magdoff’s analysis of Chinese land seizures, however, is that it remains within the realm of extraction of raw materials and agricultural products. As the proliferation of group events shows, the products of the land seizures — usually extremely harmful factories, infrastructure, and waste disposal sites — are just as important as the land seizures, themselves.

The Chinese Constitution quite progressively attributes all land in rural and suburban areas to collectives, along with house sites and private farmland. Significantly, however, local governments have taken control over virtually all land in China, and have been very liberal in turning it over to developers in the multinational push for industrial development.

“The system used to strike the landlords or speculators and protect the peasants,” remarks a colleague of mine who wishes to remain anonymous, “but nowadays it is utilized for providing the capitalist class with the price differential and a huge margin for reselling their usufruct.”[9] As China sets its eyes on hydrocarbon reserves in the South China Sea and buys up land and resources from Kyrgyzstan to Ukraine to the DRC to Ecuador, attempting to split the difference between NATO and Russia in the process, the contradictions implicit in the internal process of development (the speculation, land expropriation, and industrial infrastructure facilitating the “sustainable growth” of increasingly urbanized populations) become more visible.

Is a factory that produces fertilizer and clears out populations for miles around due to pollution not just as much of a land grab as a 200,000 hectare farmland grab that requires the fertilizer production in the first place? I would suggest that the fertilizer plant is connected to the agricultural land grab, just as a PX plant is connected to a land grab for the hydrocarbons that it uses — let alone the massive infrastructural land grabs required to facilitate the urban expansion on which the current, unsustainable model of economic development pivots. Land seizures for extraction are the furthest extreme of “upstream” development, as “primitive accumulation,” but putting the crosshairs on such enterprises alone neglects the full implications of land seizures related to the processes of modern development, thus minimizing our appreciation of the full scale of resistance to these processes together.

According to the Vice-minister of the Chinese EPA, group events against pollution increased by 29 percent each year between 1996 and 2005, when 50,000 anti-pollution group events were recorded. According to the chief of Department of Politics, Laws, and Regulations of the Ministry of Environmental Protection, major environmental group events increased by 120 percent in one year between 2011 and 2012. The placement of processing and refining facilities is destroying cropland, waterways, and the air, driving medical costs up through a skyrocketing of cancer.[10]

Some remark that the growth in resistance is counterintuitive, since environmental emergencies has been on the decline in China — however, these catastrophes have been declining, precisely because of the mass resistance, and to some extent the restraint of the Chinese government. These events have taken place in general, cross-cutting through geographic location and social position; they have avoided political affiliations; and they have displayed the ability to escalate through cooperation.[11]

One such example of the resistance movement is PX production. PX is a petroleum product that goes into plastic bottles and fibers. It is one of the most important compounds in the global marketplace, and naturally is produced through one of the most toxic processes in the world. Beginning in 2007, a widespread onslaught against PX has led to the cancellation of a dozen projects by the government, revealing on the one hand the militancy of the Chinese public, and on the other, the successful appreciate of people power by the Chinese government.

The event that began the resistance movement set the tone for a staggering mass revolt. When Draon Aromatics proposed “the largest industrial project in the city of Xiamen’s history,” ten thousand citizens took to the streets (against the wishes of NGOs). Next, Geband Chemical Co., Ltd, built a factory that emitted hydrogen suphide, poisoning local villagers in Beihai, causing some to foam at the mouth.

In 2008, a group of nine villagers blockaded the entrance for two days, but the factory persisted on a worse scale. This time, 400 villagers marched in columns, sealing the entrance, pouring oil on the access road, and attacking the security room with tractors. After 600 police came to break up the unrest, thousands descended from neighboring towns to fight together. The government negotiated a deal with the villagers and the company, and protests continue to this day. Similar events took place the next year in DalianCity, when a thousand citizens overturned cars, pelted police with bricks, and blocked traffic in protest against a PX project.

Just as upstream resource accumulation in the form of agriculture and mineral production manifest one aspect of the Global Land Grab, the downstream processing plants, including SEZs and refineries are part of the phenomenon — particularly when pollution comes into play by increasing dispossession as an externality to a manifest process of encroachment. China’s woes develop directly out of this crisis of accumulation, and some argue that they might be resolved through closer conversation between the people and the government using the intentions of the Constitution as a backdrop.

Alexander Reid Ross is co-moderator of the Earth First! Newswire. He is the editor of the forthcoming anthology Grabbing Back: Essays Against the Global Land Grab (AK Press 2014).