Forget the UN: South African activist says only an alliance from below, linking unions and social justice movements, can stop capital from destroying planetary life.

THE CLIMATE IS RIPE FOR SOCIAL CHANGE 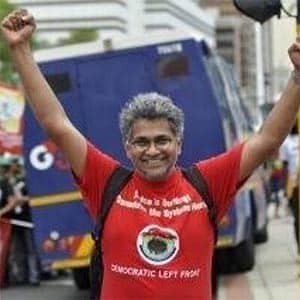 Justice activist Vishwas Satgar teaches at the University of the Witwatersrand in South Africa. This article is based draws on a talk he gave on systemic alternatives and power at a parallel event during the Lima climate summit.

In a surprising departure from the corporate-controlled narrative on climate change, on November 30 2015, during the build-up to the recent United Nations COP20 climate summit in Lima, the New York Times ran a front-page story in which climate experts warned that “it now may be impossible to prevent the temperature of the planet’s atmosphere from rising by 3.6 degrees F”.

“According to a large body of scientific research, that is the tipping point at which the world will be locked into a near-term future of drought, food and water shortages, melting ice sheets, shrinking glaciers, rising sea levels and widespread flooding – events that could harm the world’s population and economy.”

This surprising coverage went on to say a rising rate of emissions has left us with two future possibilities; an unpleasant world of climate crisis, chaos and disruption, or a world with a global deal that ensures the planet is habitable.

Either way, the future we are facing is grim.

But for climate justice activists gathered in the people’s space and on the streets in Lima, two decades of failing to reach a global deal required a different approach; a bold rejection of the pro-market and false solutions of the UN COP process such as carbon trading, the Clean Development Mechanism, finance solutions that fail to acknowledge the climate debt of rich northern nations and the commodification of forest land through the infamous REDD+ (reducing emissions from deforestation and forest degradation) scheme.

Activists have called for urgent action to advance transformative alternatives for system change as part of the people-driven just transition. The position of “no to false solutions but system change now” has to be explained to appreciate why this is the necessary way forward to secure human and nonhuman life.

In 2000, Paul Crutzen, a Nobel prize-winning atmospheric chemist, introduced the term “the Anthropocene Age.” He theorized about an unprecedented human effect on our planet’s life systems, equal in force and impact to a great geological event.

Driven by the need to make short-term profits, capital, through its organisation of production, distribution, consumption and social life, has overshot planetary limits, undermined natural cycles and now threatens human beings with extinction by means of climate change.

Capital, in this context, has become a geological force capable of ending human and nonhuman life. It is wired into a systemic logic of ecocide and is incapable of solving the climate crisis.

Moreover, over the past three decades of transnational techno-financial capitalism, our world has come to move at a dizzying speed. Social life, history and change have dramatically accelerated. This includes the superspeeds of nanotechnologies, fast food and hyper-mobile globalized financial flows.

At the heart of this is an addiction to growth, premised on the assumption of unlimited accumulation. Capitalist modernity, with its mastery of science and technology, has convinced capital that it is the conqueror of nature as well as its master.

As a master, it seeks to reduce nature to being a commodity, while ending an alternative conception of nature: nature as a commons.

This commodifying illusion informs the market-based techno-fixes of capital, such as carbon trading, which operate with the idea of no limits to capital. But the world is facing finite resources, over-consumption by a few and widespread pollution of rivers, land, forests, oceans and the biosphere.

Hence, with capital prevailing over the UN climate process, we are heading for the fast death of our future.

The planet is heating up, fast

Finally, with the current trajectory of an increasing rate of carbon emissions, carbon concentration (over 400 parts per million) and a rapidly heating planet, climate justice movements are thinking hard about securing our common future.

In this regard, they seek to counter two possible futures we face.

First, in various Pentagon research reports, well documented by Christian Parenti in his book Tropic of Chaos: Climate Change and the New Geography of Violence, the Pentagon envisages a world of climate-induced chaos.

Thus it seeks to use its awesome military power to discipline the zones of chaos while protecting “lifeboat America”. This is the ultimate fascist solution.

Second, a view of our future argued by Rebecca Sonlit, in her book A Paradise Built in Hell: The Extraordinary Communities That Arise in Disaster, recognizes a pattern of human purpose and civic virtue coming to the fore in the context of disasters such as the great San Francisco earthquake and Hurricane Katrina.

Her book assumes the Manichean make-up of human nature, with its disposition for both evil and good, but she documents a pattern in which altruism and mutual aid is manifest when disasters happen.

Such a view celebrates the human spirit as a way to confront the adversity of the future and is generally a progressive response, but it tends to work with an implicit fatalism and falls short in terms of grappling with the agency required for system change now.

Instead, I would argue, a system-change perspective is grounded in appreciating that the pattern of history informing our future derives from the 20th century.

It is this pattern of struggle and its understanding of human nature as socially determined that best equips us to confront and secure the future now. It is this perspective that also enables us to champion system change alternatives in the present.

An important example in this regard is the rights-of-nature alternative. Its power as a transformative alternative was demonstrated in Lima in a sitting of the International Tribunal in Defense of the Rights of Nature.

The tribunal brought forth great creativity on the part of activists to demonstrate the power of this alternative.

Fracking in the United States, now standing  at 800 000 gas and oil wells, stood out as the source of “fraccidents” such as earthquakes, pollution of water resources, as well as a second wave of genocidal violence against native Americans.

Besides testimony, activists also highlighted how the rights of nature are an effective transformative discourse, providing a recourse to challenge such destructive practices, if enshrined in national laws or sub-national regulations. In seven states in the US, fracking is now banned; In short, the rights-of-nature alternative places a limit on capital’s avaricious pillaging.

In addition to the rights of nature, other alternatives such as food sovereignty, solidarity economy, rights-based carbon budgets, climate jobs, socially owned renewables and affordable public transport are all adding up to a paradigm counter to capitalist modernity, redefining a relationship between humans and nature, and advancing a logic of systemic change.

As part of a just transition, such alternatives seek a society based on solidarity to sustain all forms of life.

In South Africa, the time for the just transition has arrived so that we can all survive climate change.

As a response to the climate crisis, it affords us an opportunity to address the failings of South Africa’s transition to democracy: inequality, unemployment, hunger, white privilege, ecological destruction and dispossession.

It affords us an opportunity to build a South Africa that belongs to all who live in it, black and white, such that the wealthy pay the price for this achievement and we realize Nelson Mandela’s dream.

Although the ANC state has a declaratory commitment to green growth, green jobs and even a notion of the “just transition” in the National Development Plan, this is empty policy-speak and an add-on to carbon markets, renewed extractivism (including fracking), fossil-fuel and nuclear energy sources, corporate-controlled renewables, export-led agriculture and deindustrialization of transport and renewables manufacturing.

Essentially, the ANC state has surrendered to market-centered green neoliberalism and the logic of ecocide.

It has shown itself incapable of leading transformative just transition. Instead, this has to be led from below by forces such as the United Front (led by the National Union of Metalworkers of South Africa), the emerging Food Sovereignty Alliance, the Solidarity Economy Movement, community-mining networks and rural movements.

Such forces need to champion a “people’s Codesa” (Convention for a Democratic South Africa) on the climate crisis and a just transition before it is too late.