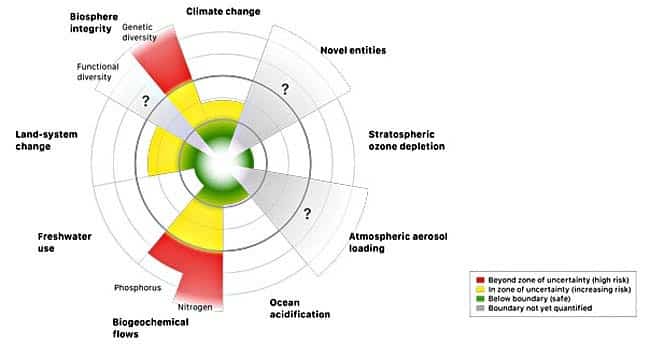 Four of nine planetary boundaries have now been crossed as a result of human activity, says an international team of 18 researchers in the January 16 issue of the journal Science. The four are: climate change, loss of biosphere integrity, land-system change, altered biogeochemical cycles (phosphorus and nitrogen).

Two of these, climate change and biosphere integrity, are what the scientists call “core boundaries”. Significantly altering either of these “core boundaries” would “drive the Earth System into a new state”.

“Transgressing a boundary increases the risk that human activities could inadvertently drive the Earth System into a much less hospitable state, damaging efforts to reduce poverty and leading to a deterioration of human well being in many parts of the world, including wealthy countries,” says Lead author, Professor Will Steffen, researcher at the Centre and the Australian National University, Canberra. “In this new analysis we have improved our quantification of where these risks lie.”

The new paper is a development of the Planetary Boundaries concept, which was first published in 2009, identifying nine global priorities relating to human-induced changes to the environment. The science shows that these nine processes and systems regulate the stability and resilience of the Earth System – the interactions of land, ocean, atmosphere and life that together provide conditions upon which our societies depend.

The research builds on a large number of scientific publications critically assessing and improving the planetary boundaries research since its original publication. It confirms the original set of boundaries and provides updated analysis and quantification for several of them, including phosphorus and nitrogen cycles, land-system change, freshwater use and biosphere integrity.

Though the framework keeps the same processes as in 2009, two of them have been given new names, to better reflect what they represent, and yet others have now also been assessed on a regional level.

“Loss of biodiversity” is now called “Change in biosphere integrity.” Biological diversity is vitally important, but the framework now emphasizes the impact of humans on ecosystem functioning. Chemical pollution has been given the new name “Introduction of novel entities,” to reflect the fact that humans can influence the Earth system through new technologies in many ways.

“Pollution by toxic synthetic substances is an important component, but we also need to be aware of other potential systemic global risks, such as the release of radioactive materials or nanomaterials,” says Sarah Cornell, coordinator of the Planetary Boundaries research at the Centre. “We believe that these new names better represent the scale and scope of the boundaries,” she continues.

In addition to the globally aggregated Planetary Boundaries, regional-level boundaries have now been developed for biosphere integrity, biogeochemical flows, land-system change and freshwater use. At present only one regional boundary (South Asian Monsoon) can be established for atmospheric aerosol loading.

“Planetary Boundaries do not dictate how human societies should develop but they can aid decision-makers by defining a safe operating space for humanity,” says co-author Katherine Richardson from the University of Copenhagen.