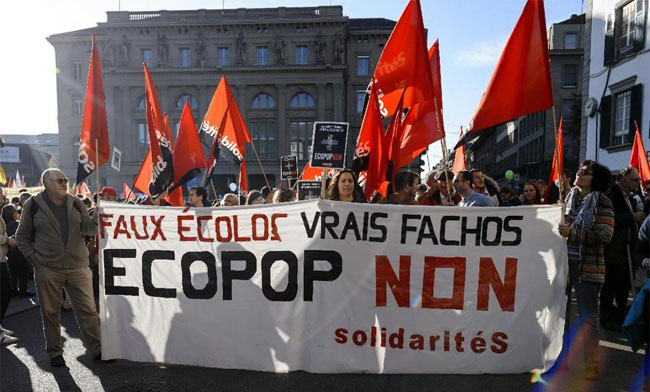 A purportedly pro-environment campaign to keep out immigrants has been defeated in Switzerland.

The campaign was initiated by  Ecologie et population — usually abbreviated as Ecopop — which describes itself as “the only environmental organization in Switzerland, which focuses on population growth.” In 2012 it gathered enough signatures to force a binding national referendum on a two-part proposal: to limit annual immigration to 0.2% of the country’s total population, and to devote 10% of Swiss foreign aid to population reduction programs in Third World countries.

In an interview with the BBC, a spokesman for Ecopop explained that both proposals aimed at the same goal: “For Switzerland the key source of the fast growth of population is immigration, hence we have to limit that. If however you look at poor countries the source of the population growth is clearly fertility.”

The Green Party, which called for a no vote, accused Ecopop of scapegoating immigrants for problems they didn’t cause and promoting neo-colonial policies towards poor countries: “It is not our role to say you are having too many children, when in fact we are causing 80% of the environmental pollution.”

In the referendum vote, held November 30, voters rejected the Ecopop proposal by a decisive 3-to-1 margin.

That’s an important victory, but the fight is far from over. The right-wing Swiss Peoples Party (SVP), which has more seats in the federal assembly than any other party, also favors strict limits on immigration, and is not averse to using environmental arguments to promote them.

For an idea of where this might lead, look across the border in France, where this week the virulently anti-immigrant National Front launched a movement called New Ecology to campaign for “patriotic” environmental policies including opposition to a global climate agreement and support for France’s nuclear industry. Campaigns such as Ecopop’s strengthen such groups by lending green cover to their racist policies.