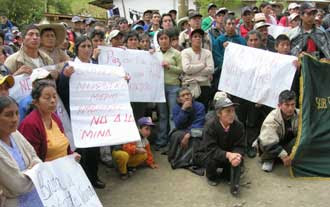 (IPS) – For the second time in Peru, a mining project was rejected by local communities in a popular referendum. More than 90 percent of those who came out to vote in three districts in the northern province of Piura said “no” to the mining operations of the Minera Majaz company.

People from outlying rural areas and villages began arriving in the towns of Ayabaca, Pacaipampa and El Carmen de la Frontera on Saturday night, packing the streets and plazas after walking up to eight hours to cast their ballots in Sunday’s non-binding vote.

“The people can’t be fooled. They don’t want the mine,” Servando Aponte told IPS after casting his vote. People began crowding around the polling centres before dawn, even though they did not begin operating until 8:00 AM.

The results went against Minera Majaz, a wholly-owned subsidiary of the London-based mining company Monterrico Metals, which was taken over earlier this year by China’s Xiamen Zijin Tongguan Investment Development Co. when it acquired 89.9 percent of the mining company’s shares.

Communities in the highlands province of Piura have opposed Minera Majaz’s operations in the area since the company began to explore for copper and molybdenum in 2002, and demonstrators have been killed and injured in protests against the mine. Relations between the company and local residents remain tense.

On Sunday, 93.4 percent of the ballots cast in Ayabaca were against the company’s Río Blanco mining project, as were 97 percent in Pacaipampa and 92.5 percent in El Carmen de la Frontera.

Of the more than 31,000 registered voters in the three districts, an average of 60 percent took part in the referendum, which has increasingly drawn the wrath of President Alan García and Prime Minister Jorge del Castillo.

Although del Castillo had complained that local residents opposed to the mine were causing problems, the police did not report any incidents or irregularities, and the unofficial vote organized by local authorities and a group of concerned citizens went smoothly.

The outcome was reminiscent of a popular referendum held by local farmers in Tambogrande, another town in Piura, in 2002, when 98 percent of voters opposed the operations of the mining company Manhattan Sechura, a subsidiary of the Canadian corporation Manhattan Minerals. The company eventually withdrew from the area.

Now history repeated itself. The communities in the area where the exploration phase of the Río Blanco project was already shown to have caused damages say the mining represents a threat to the rivers on which they depend for their crops, and complain that the company has been operating illegally on their communally-owned lands.

President García once again emphasized on Sunday that the vote was non-binding and that it was not considered legal by the country’s electoral authorities.

While the campesinos (mainly indigenous country people) in Piura flocked to the polling stations in the three towns, García asked the public “Are we going to let misinformation and ideological manipulation stand in the way of the country’s progress? What do we Peruvians want? To stay where we are, or to grow?”

The García administration argues that the organizers of the referendum are undermining the country, given that the mining industry is the backbone of the economy, accounting for 60 percent of income tax, and with 11 billion dollars in new projects in the pipeline.

Peru is the world’s second biggest producer of silver, the third of copper and zinc, the fourth of lead, and the fifth of gold.

With minerals prices booming, the government is keen on taking full advantage of the moment.

“The government is desperate to keep up the economic growth figures based on mining,” economist José de Echave, director of Cooperacción, a local non-governmental organization, told IPS. The NGO was one of the groups that helped organize the popular referendum.

More than 22 international observers from NGOs in Ecuador, Bolivia, Spain, Germany, Britain, Canada and Switzerland took part in the process.

Ralph Hoelmer of the Network Institute for Global Democratisation said in Ayabaca that the referendum is entirely legitimate. “This is a good thing because it allows people to express their views on their own destiny. These democratizing processes are rare in the world,” he added.

Representatives of the Peruvian Ombudsman’s Office also visited the area to investigate the prime minister’s claims that the local promoters of the referendum forced people to take part in the vote by means of fines and by cutting off water services.

The Ombudsman’s Office has not yet published its report.

Although no violent incidents were reported, Magdiel Carrión Pintado, the president of the Provincial Federation of Rondas Campesinas (groups that make up a sort of alternative community justice and dispute-settlement system) of Ayabaca, reported that flyers were found, urging people not to vote in the referendum because it was an act of “communist meddling” aimed at blocking development in the region.

President García himself set forth similar arguments in remarks to the press.

The government’s opposition to the referendum went beyond mere statements. The National Election Board (JNE) accused the three mayors involved in organising the referendum of “usurpation of functions” and on Sept. 11 requested the confiscation of the election materials used in the process.

Added to that was a last-minute parallel referendum organised in Talara, another town in Piura. The mayor, José Vitonera, belongs to the governing APRA party.

A week ago, he suddenly asked the town council to vote on whether to hold a referendum to allow people in Talara to vote for or against the mine. With 20 percent of the ballots counted, it was reported that 83 percent of the local population had voted in favour of the mining company in the surprise referendum.

“The referendum in Talara was just a boycott,” Marisol Espinoza, a lawmaker with the Nationalist Party of Peru, told IPS. “It is aimed at tarnishing the results of the popular consultation organized by the communities opposed to Majaz.”

On Sunday night, del Castillo once again attempted to dismiss the referendum held in Ayabaca, Pacaipampa and El Carmen de la Frontera, claiming that “at least 50 percent of voters” failed to turn out.

But the organizers of the referendum and local leaders reported that 70 percent of voters participated in Pacaipampa, 59 percent in Carmen de la Frontera and 50 percent in Ayabaca.

“When a huge investment is made (an allusion to the support of non-governmental organizations), and not even half of the electorate comes out to vote, it’s obviously a fiasco,” said del Castillo.

But while he has consistently criticized the referendum organized by the communities opposed to the Río Blanco mining project, del Castillo said the government was open to dialogue with all of the concerned parties.

Local authorities and community leaders, however, say they will only sit down to talk once they have the results of the referendum in their hands, and insist that the people’s will must be respected.

Under Peruvian law, local communities need to give permission for companies to use their lands. Although the Ombudsman’s Office verified that the communities in question denied their consent for Minera Majaz to use their communally-owned lands, the Ministry of Energy and Mining disregarded their refusal.

The preliminary results of a study by researchers at the University of Texas recently showed that the exploration phase of the Río Blanco mining project caused damages to the area’s biological diversity.