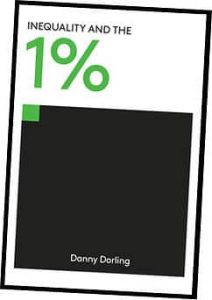 Inequality and the 1%
by Danny Dorling
Verso 2014

For over thirty years we have been told that inequality is simply a moral issue. After all, a rising tide lifts all boats. We should not worry about a widening gap as long as the poor are benefiting from wealth creation. As Thatcher explained in her last speech in the House of Commons you cannot create wealth by focusing on narrowing the gap. Inequality can actually help the poor aspire to work harder so as to achieve what the top 10% have. Up to 2008, it was possible to increase spending in education and the NHS while allowing inequality to widen.

Danny Dorling in his new book Inequality and the 1% tries to change the reader’s perception of inequality. He argues that inequality is bad not just for the 99%, the economy and the climate, but also for the top 1%. It is up to the 99% to control the greed of the 1% — “for their own good as well as ours” (p.173).

Although the 1% has been distancing itself from the rest of society in the UK, the rest of us are becoming more equal and poorer than in 2008. The 99% have more in common now than for a generation. It is among the top 10% that growing inequality is the clearest to see. He explains:

“In contrast to the 1 per cent, everyone else really does look very, and increasingly, ordinary. Take a couple without children who have a joint income before tax of £50,000. One small pay rise and they’d be members of the top 10 per cent; but they receive £110,000 less each year than the poorest of the top 1 per cent” (p.7).

As result most people are excluded from the top 1% no matter how well they do in their career. This includes the most expensive head teachers and GPs, which is important point for those of us who want change.

“Without the support of the upper middle class, it becomes harder for the elite to rule, to secure the election of their favoured politicians, to control public opinion, to remain elite. This happens when members of the upper middle class realise that they have more in common with those beneath them than with the top 1 per cent. A new solidarity develops. Dissent rises and is not subdued” (p.21).

The elite use the control they have over the media to spread myths to offset the growing consensus among the 99%. Putting the blame on immigrants and ‘benefit scroungers’ has the objective of rallying support to their side. They choose the party of opposition, UKIP, and limit access to the media by any true alternative.

The first myth starts at childhood. The educational system is designed to justify the amount the 1% earns. If they earn so much it must be because they are remarkably gifted. It is the myth of meritocracy. Poor peoples’ lack of strive keeps them at the bottom. Only a few are potentially talented and that is reflected in wealth. Those at the top actually believe that they are better and deserve to be there. However, ‘only a tiny fraction (0.031%) of the 1 per cent consists of talented singers, sport stars or entertainers’ (p.50). The vast majority of the 1% consists of those entrusted in looking after other people’s money.

The other myth is that those at the top are there because of the way the market works through supply and demand. There is a limited supply of highly talented people and a huge demand for them. This myth is debunked in the book and we are reminded that pay is much more a result of bargaining power than supply and demand, or productivity:

“Growing inequality is not an unfortunate by-product of highly efficient competitive markets, but the end product of subtle rises in protectionism. In effect, the upper-middle and upper classes have become unionised through professional bodies such as the British Medical Association and the British Bankers’ Association’”(p.57).

There is growing evidence that, for the majority of well-adjusted pro-social people, getting much more than others reduces their sense of well-being. Only a tiny, narcissistic, individualist minority actually enjoy getting much more than others. It is estimated that only 1% of the population suffer from narcissistic personality disorder – most of which are men. “Pay the most and you are likely to get the greediest, who in turn are unlikely to curb the greed of those around them” (p.163).

Concentrating wealth and punishing the poor by cutting benefits is bad for the economy. Benefits are transfer payments from the state to local businesses and landlords. Some of these return to the state in form of VAT, council taxes and business rates. It is what economists call the multiplier effect – every pound spent on benefit generates more than a pound as it circulates through the economy. Benefits should be seen as an investment. The cuts are not about saving money, but how the 1% wants the state to operate.

Another myth is that if we want the rich to pay their taxes we have to lower them. That was the rationale behind lowering the top rate to 45%. That is simply a lie to justify cutting taxes for the rich. ‘People pay tax if they are made to. When there was a 50 per cent tax band in the UK, over 80 per cent of people earning between £500,000 and £10 million paid what they owed. Higher taxes do not result in less being levied’ (p.77).

Growing inequality also has a moral consequence. The justification for inequality is that those at the top are in some ways different and superior to those at the bottom. Growing inequality generates blindness to the suffering of others. These others can even be close relatives. There is a growing generation that has a financial interest in the early deaths of their parents so that they can inherit a deposit for a mortgage and hop onto the propriety ladder. This lack of concern for others is reflected in people’s attitude towards spending on benefits for disabled people. In 1998, 74% wanted to see more being spent on those with disabilities. That figure fell to 53% in 2011.

Inequality is bad for the health not just for the 99%, but also for those at the top. People in a more equal society such as Japan live more than four years longer than those in the USA. In Finland, not only do the poor live longer, but the rich live longer than the rich in the UK.

The belief that those at the top are there because of the decisions they made in life leads us to think that the poor are where they are because of the decisions they made. That is reflected in poor health. Consequently the poor are told to change their behaviour, stop smoking, exercise more and eat healthier. There is a myth that it is a waste of money and even harmful to give poor parents more money as they would only spend it frivolously. The evidence shows the contrary. Parents spend more on quality food for their children as income increases.

Inequality also produces what is called social death, the exclusion of a group of people dominated and humiliated to the point of becoming dead to the rest of society. The shame of living in relative poverty and needing to be helped because of your deficiencies can cause people to withdraw from society and in extreme cases to have thoughts of suicide.

Dorling presents some points that could be used in an electoral manifesto. Keep healthcare public. “It is immoral to profit from another’s illness” (p.155). Spread wealth. As Francis Bacon said in 1625, money is like muck. If it is not spread around the stink of corruption becomes difficult to disguise.

Reduce the retirement age to sixty or least move it back to sixty-five. It is easily affordable since the state pension is roughly the same as Jobseekers’ Allowance. Those retiring would create a job for the younger generation. The older generation who retire are more likely to do voluntary work than the young. Promoting employment would be beneficial for the nation’s mental health. More conductors on buses and staff in post offices would encourage more face-to-face interactions. We could see more teachers in smaller classes instead of executives paid millions of pounds.

Inequality and greed cannot go for ever. One way or another it will end; it always does. The question is how it will end. We can wait for the system to collapse and hope to build a more equal society from a poorer country. But Dorling points out that this would be “a giant gamble that might result in a poorer and even more unequal future” (p.170). Or, we refuse to lose our sense of anger and we take control of these people at the top – “for their own good as well as ours” (p.173).