Belgian ecosocialist Daniel Tanuro says the latest IPCC report has sounded an alarm that we must not ignore. Only radical change can avert climate disaster.

Belgian ecosocialist Daniel Tanuro says the latest IPCC report has sounded an alarm that we must not ignore. Only radical change can avert climate disaster.

Daniel Tanuro is the author of Green Capitalism: Why it can’t work (Merlin, 2013).
This article was translated by Ian Angus for Climate & Capitalism, from the Belgian monthly La Gauche.

THE IPCC SOUNDS THE ALARM

The International Panel on Climate Change has now published its fifth Synthesis Report along with a Summary for Policy Makers. The diagnosis is no surprise: 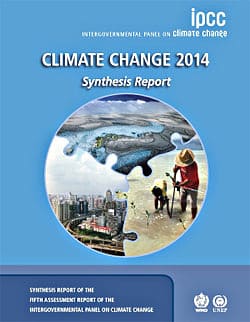 The evaluation made in this fifth report is not fundamentally different from previous ones, but the confidence level of the warning is greater. Some areas of uncertainty are becoming clearer and the authors’ concern is more obvious than ever.

The phrase “virtually certain” (more than 99% probability) is used more and more in describing the likelihood this or that phenomenon. For instance, several centuries of melting  permafrost and rising sea levels are now considered “virtually certain,” even if emissions are drastically reduced,

Behind the “objective” scientific tone of the report, the IPCC is clearly sounding an alarm. The experts’ concern is palpable. This is particularly apparent in the fact that the summary for policy makers contains a section on the increased risk of “irreversibility and abrupt changes” beyond 2100. For example, we read that “The threshold for the loss of the Greenland ice sheet over a millennium or more, and an associated sea-level rise of up to 7 m, is greater than about 1°C but less than about 4°C of global warming.” So limiting the temperature rise to 2°C does not completely eliminate the risks of very profound changes to Earth’s ecosystems. [2]

The media regularly repeats statements that blame methane gas produced by ruminants and CO2 emissions caused by deforestation. There is some truth in these claims, but the IPCC puts the record straight: “Emissions of CO2 from fossil fuel combustion and industrial processes contributed about 78% of the total greenhouse gas emissions increase from 1970 to 2010, with a similar percentage contribution for the increase during the period 2000 to 2010.” A graph showing the amount of the different gasses between 1970 and 2010 confirms that the main problem is the use of coal, oil and natural gas as energy sources.

This conclusion is crucial when it comes to developing solutions. The IPCC experts synthesized existing literature on models of “mitigation” of global warming. They describe eight different scenarios, depending on the level at which the atmospheric concentration of the greenhouse gasses is stabilized by the end of this century. For each scenario, a table shows the emission reductions of emissions that would be required between 2050 and 2100 and the probability that temperature increase would stay below a given level, (1.5°, 2°, 3°, 4°C)  compared to the pre-industrial period. In every scenario, reducing CO2 emissions from burning fossil fuels plays a central role.

Scenarios: between nightmare and revolution

The least restrictive scenario is the one in which emissions continue to rise at approximately the current rate. In this case, the probability of going beyond a 4°C rise, is “more likely than not.” The list of social and ecological disasters resulting is long and nightmarish. For human health, for example, the report states that “the combination of high temperature and humidity in some areas for parts of the year is expected to compromise common human activities, including growing food and working outdoors (high confidence).” The productivity of agriculture and fisheries will be severely affected. Biodiversity loss will accelerate.

At the other extreme of possibilities, a small number of studies consider stabilization of the atmospheric concentration at 430ppm of CO2e [3]. But this is the current level, and the effort necessary to maintain it will be extremely restrictive, even colossal. In 2050, global emissions will need to be cut 70 % to 95 % (below the 2010 level); by 2100, they must fall 110% to 120 % [4]. The Summary for Policy Makers says no more about that.

That scenario implies a revolutionary reorientation of all areas of life, but it is the only one that offers a chance of avoiding global warming above 1.5°C, the objective that many scientists (including the president of the IPCC!) consider necessary.

In practice, the report focuses on two scenarios: stabilization at 450 ppm and  at 500 ppm. In those cases, they estimate the chance of achieving a 2°C  maximum as “likely” (more than 66% probability), “more likely than not”, or “as likely as not.” Staying beneath 1.5°C is barely possible with stabilization at 450 ppm, but the chance is very slim (“more unlikely than likely”).

These scenarios allow a (small) margin for an increase of greenhouse gasses in the atmosphere from continued burning of fossil fuels for a limited time, but the constraints would nevertheless be severe. For example, to stabilize at 450 ppm, world emissions have to decrease by 42% to 57% by 2050 and by 78% to 118% by 2100, compared to 2010. In 2050, the amount of energy produced with zero or very low carbon intensity, must increase by 90% on a worldwide scale[5]. The fact that 78% of emissions are CO2 from burning of fossil fuels and that this represents 80% of the energy used by humanity, shows the magnitude of the difficulty.

There is of course a technical dimension, which I won’t consider here. There are, above all, social and political dimensions. The report insists on a just distribution of effort among countries based on their historical responsibility, on technology sharing, on the need for international collaboration, on the importance of combining the fight against climate change and the fight against poverty, on the ethical imperatives of this combination and on the challenge posed for the human species. These are crucial issues which potentially challenge the logic of neoliberalism. No previous IPCC report as previously delivered such a message so forcefully.

There is a another social difficulty about which  the Summary for Policy Makers has little to say, despite its importance. At a certain point we read: “Mitigation policy could devalue fossil fuel assets and reduce revenues for fossil fuel exporters, but differences between regions and fuels exist (high confidence). Most mitigation scenarios are associated with reduced revenues from coal and oil trade for major exporters (high confidence).”

These two little sentences refer to a crucial issue: in order to stay below 2°C of warming, 80% of current known reserves of fossil fuels must stay in the soil and never be extracted. But these stocks are part of the assets of the oil companies and of the ruling families in producing States. It is a euphemism to write that a policy of mitigation could devalue fossil fuel assets. In reality, any mitigation policy worthy of the name will lead to the pure and simple destruction of most such capital.

The bosses of the fossil energy sector are well aware the danger. That’s why they have massively financed the “climate deniers” and by doing that have won themselves some time. But in the long run, it is unlikely that the lies of these charlatans can cover up the disturb scientific evidence presented by the IPCC. That is why emphasis is increasingly being put on the search for “realistic” mitigation policies that are compatible with maintaining the profits of the bosses in the coal, oil and natural gas sectors.

Carbon capture and geological sequestration (CCS) has a strategic place in this, and the report by the IPCC attaches much importance to it. But don’t be confused by the media’s focus on the “good news” that remaining below the 2°C will reduce growth by only 0.06%. That figure is mentioned in the report, but it also says that is was calculated on the assumption of massive deployment of Carbon Capture and Sequestration. According to the report, the energy transition needed between now and 2030 will require investment of several hundreds billions dollars per year, globally. That’s a pretty enough sum … but without CCS, the price would increase by 138%, even 200%.

However, the role of fossil fuels is only one aspect of a much larger question: the logic of accumulation is at stake. It has become a cliché to say that infinite growth is impossible on a finite world. Since the energy conversion process itself will generate significant new emissions, radically reducing emissions between now until 2050 will require reducing final energy consumption to a degree and in ways that challenge logic of “always more” energy. To put the matter briefly: we must reduce material production and transportation.

This is possible without harming the quality of life (on the contrary, while increasing it) if we abolish all useless and harmful production, planned obsolescence, the ridiculous amount of transport required by globalization, etc. It is possible without destroying jobs (on the contrary, while creating jobs) if we share work, wealth, knowledge and technologies. But each of those options leads inevitably to the same conclusion: we have to challenge capital as such.

The majority of researchers who create mitigation models do not take this possibility into account. For them, accumulation is part of the landscape, a law of nature. So in addition to CCS, most strategies include expansion of nuclear energy and massive burning of biomass. These are, so to speak, repair patches on accumulation. The Summary for Policy Makers does mention some risks of those technologies, especially competition between food production and biomass, but the IPCC only compiles existing studies and is therefore dependent on them.

More than an ecological struggle

The Paris summit (COP21) at the end of 2015 is supposed to deliver a climate accord. The IPCC report puts everyone’s responsibilities squarely in front of them. We expect it to play an important role.But the governments won’t consider anticapitalist alternatives. The contours of the catastrophe are becoming more certain, more visible, and more frightening, while hundreds of millions of poor people are already the first victims of global warming. At best, the government negotiators will only be able to concoct — behind closed doors — a climate agreement which will be ecologically insufficient, socially unjust, and technically dangerous at the technical level. Recent decisions by the European Union show this danger clearly.

The possibility of another road depends on social mobilization. Because this is more than an ecological question: the human challenge is fundamental, and the choices of society and civilization will determine everything else. Our opponents are powerful. Only collective action of all the oppressed and exploited can drive them back.

From now on, we must use the alarm issued by the IPCC. to build the largest front possible in favour of a social and ecological alternative. In a word: ecosocialism.

A different translation of this article has been published in International Viewpoint.