Daniel Tanuro’s book is an important contribution to the fight against climate change and for ecosocialism, but parts are open to challenge 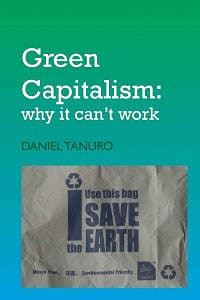 Daniel Tanuro
Green Capitalism: Why it can’t work
translated by Jane Ennis
Merlin Press, in association with Resistance Books and the International Institute for Research and Education
ISBN 978-0-85036-646-4
London, 2013

The four schools include many subdivisions. Advocates of social change, for example, include anarchists, autonomists, social ecologists, Marxists, and more, and there are debates within and between each of those currents. This is entirely positive: frank discussion of different views is an essential part of building an effective movement for radical social and environmental change.

Green Capitalism: Why it can’t work, by the noted Belgian ecosocialist Daniel Tanuro, is an important contribution to these ongoing discussions. Originally published in French as L’impossible capitalisme vert (La Découverte, 2009), it speaks to two separate audiences, challenging greens to recognize that environmental destruction cannot be stopped so long as capitalism continues, and challenging Marxists to change their views and behavior, to take into account limits to growth.

Tanuro is most successful in his challenge to mainstream greens. He rebuts the common view that pollution is caused by humanity in general — “it would be infinitely more accurate to refer to capitalist climate change instead of ‘anthropogenic’ climate change.”(43) Then, in an effective argument that mostly avoids abstract economic theory, he demonstrates the practical impossibility of stopping the climate crisis by carbon taxes, emissions trading, green subsidies, or any other means short of radical social change.

The best scientific knowledge available shows that catastrophic climate change can only be avoided if greenhouse gas emissions are reduced quickly and drastically, but that can only be done by breaking the wealth and power of the world’s most powerful corporations.

More broadly, a global energy revolution is required, replacing very profitable fossil fuel systems with renewables that are not yet cost-effective in capitalist terms. An economy in which investors demand short-term profits simply can’t carry through such a sweeping change: “in the short period of 40 years which is left to us, one cannot envisage how the system could instigate a transition in energy use at the necessary or possible level with its mechanisms of price, competition and the market.”(70)

“If by ‘green capitalism’ we understand a system in which the qualitative, social and ecological parameters are taken in account by the numerous competing capitals, that is to say even within economic activity as an endogenous mechanism, then we are completely deluded. In fact, we would be talking about a form of capitalism in which the law of value was no longer in operation, which is a contradiction in terms.”(112)

But, Tanuro says, the need for a global energy revolution also challenges the view defended by many socialists in the 20th Century, that socialism will initiate an era of increased material abundance, in which the means of production, freed from the fetters of profit, would expand to meet all human needs. Massive public investment in renewables can meet our energy needs, but at a cost:

“The snag is that these investments call for material production, thus an energy source which, at least in the first phase of transition, must be mostly fossil fuel – which is a source of increased greenhouse gas emissions. …

“The conclusion is inescapable. The constraints [on greenhouse gas emissions] cannot be respected unless the investments necessary for a new energy system go hand in hand with a radical reduction of energy consumption in developed countries.”(71-2)

In other words, new technology alone won’t protect the climate, because the very process of manufacturing and installing it will  increase emissions during the transition. That important insight is rarely mentioned by the technology substitution crowd.

Tanuro estimates that a 40-year global conversion to renewables, combined with necessary emission reductions and phasing out nuclear, will require a 50-75 percent reduction in energy consumption in Europe and North America. The cuts must be even greater if the transition also involves – as it surely must – substantial improvements in the living standards of the three billion people who now live in absolute poverty in the global south. Much of the energy reduction can be achieved by eliminating useless or harmful activities such as advertising and arms manufacture.

Surprisingly, since he has insisted that only radical social and economic change can save the planet, he then says that ecosocialists should initiate energy reductions today, by encouraging changes in consumer behavior. “These modifications – travelling differently, eating less meat and more seasonal vegetables, for instance  –  should be undertaken immediately, because time is short and there are immediate implications.”(73)

This call for immediate lifestyle changes – unlike Tanuro’s well-documented account of the social roots of the climate crisis – is brief and impressionistic. He dismisses out of hand any idea that eliminating polluting industries and stopping hyper-consumption by the rich could by themselves achieve our goals. He simply asserts, without proof, that the transition requires working people to reduce their living standards. He may be right, but he doesn’t make his case.

Nor does he explain how a call for sacrifice could contribute to building effective mass movements to replace capitalism and implement massive global energy changes. He may not intend it, but he appears to be calling for an ecosocialist austerity movement, and that would seem to be a non-starter.

As he admits in the Preface to this English translation, “this strategic direction – the greening of struggles – should have been amplified in L’impossible capitalisme vert.”(18) That’s a major weakness: having been convinced that green capitalism is a contradiction in terms, readers have a right to expect a more convincing account of the ecosocialist alternative – what it may be like, and how it can be achieved.

In his final chapter, Tanuro says Marxism needs revision because Marx and Engels didn’t understand the difference between renewable and fossil energy. That questionable claim requires a more complete response than is possible here: I will discuss it in a future article.

Although some aspects are open to challenge, Green Capitalism: Why it can’t work is an important contribution to the fight against climate change and for ecosocialism. Tanuro isn’t just a writer, he’s a leading environmental activist, and it shows – he provides a wealth of concrete information and analysis that we can actually use in the struggle against capitalist ecocide. I hope it is widely read, and that it stimulates further debate and discussion, as we continue with the essential task of  building a movement that agrees with Tanuro’s concluding words:

“The only possible socialism is ecosocialism which is a focused expression of the fight against the exploitation of human labour and the destruction of natural resources by capitalism – from now on these two strands are indivisible. Ecosocialism does not stem from a romantic vision of establishing ‘harmony’ between humanity and nature, but from the conviction that true wealth resides in creative activity, in free time, in social relations, and in the contemplation of the world with wonder.”(143)

After many negative experiences, I approach translations of left-wing books with trepidation, so I was very pleased to find that for the most part Green Capitalism is clear and eminently readable.

Unfortunately, however, someone decided to retranslate quotations that were originally published in English or that are available in authoritative English editions, rather than going to the sources. That’s contrary to good translation practice, because it results in “quotes” that don’t match the authors’ actual words.

For example, on page 41 the American Marxist philosopher Bertell Ollman is quoted in a confusing translation of a French translation: “In order to understand each specific problem, it is necessary to abstract a level of generality which reveals the characteristics which bear the greatest responsibility.”

Here’s what Ollman actually wrote: “It is essential, in order to understand any particular problem, to abstract a level of generality that brings the characteristics chiefly responsible for this problem into focus.”

More seriously, some of the English-to-French-to-English translations are simply wrong. On page 44, for example, economist Nicholas Stern’s famous description of climate change as a “market failure” is rendered as a “setback to the market.” That entirely misses the specific meaning of “market failure” in economics. Stern wrote that the market allows harmful emissions, not that emissions harm the market.

This reliance on double translations is made worse by the fact that many of the book’s footnotes lack essential information. It’s virtually impossible to check quotes that are identified only as “Marx, Capital, Vol. 3” or “Marx, The Grundrisse,” or “UNDP (2007-2008),” with no edition or page number.

Green Capitalism is a valuable book. It would have been much better with original quotations and proper references.