La Via Campesina says the UN proposal will increase the vulnerability of peasants and small producers, pushing them further into debt and dependency.

La Via Campesina says the UN proposal will  increase the vulnerability of peasants and small producers, pushing them further into debt and increased dependency.

The statement below was published by La Via Campesina, the world’s largest organization of peasants and small farmers, on September 23, 2014, before the UN Climate Summit in New York City. 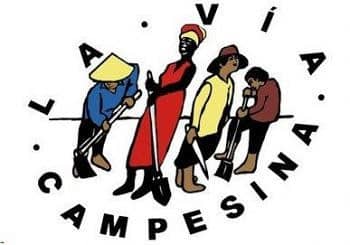 History presents itself first as tragedy, and the second time as a farce.

As women, men, peasants, smallholder family farmers, migrant, rural workers, indigenous, and youth of La Via Campesina, we denounce climate smart agriculture which is presented to us as a solution to climate change and as a mechanism for sustainable development. For us, it is clear that underneath its pretense of addressing the persistent poverty in the countryside and climate change, there is nothing new. Rather, this is a continuation of a project first begun with the Green Revolution in the early 1940’s and continued through the 70’s and 80’s by the World Bank’s Poverty Reduction projects and the corporate interests involved.

These projects, such as the so-called Green Revolution, decimated numerous peasant economies, particularly in the South, to the extent that many countries, like México for example, that were self-sufficient in food production, became dependent on the North to feed their population within a short couple of decades.

The result of these projects, dictated by industrial capital’s need for expansion, was the coopting of traditional agricultural producers and production and their insertion into the present industrial agriculture and food regime. A regime that is based on increased use of toxic chemicals, dependent on fossil fuel inputs and technology, increasing exploitation of agricultural and rural workers, with its resulting loss of biodiversity; a food system that is now under the control of corporations and large industrial farmers, the main beneficiaries of these projects.

The result has been the loss of food security and sovereignty, transforming entire countries that were once net food exporters into net food importers. This is not so much that they cannot produce food, but because now, instead, they produce commodity crops used to produce industrialized foods, fuels, manufactured products for sale, and for speculation in the world financial markets.

Today, some of the same actors of these previous projects, such as the World Bank, are the forces behind the imposition of climate smart agriculture as a solution to climate change and to increase income of the rural poor using the same failed thesis that to increase incomes one must increase productivity. It is clear that the intention is to create a market for the Green Revolution as a solution to climate change, poverty and as a proposal for sustainable development in rural areas.

We identify this as part of a larger process of “green” structural adjustment projects required by an economic system and the political elites in distress, because they have exhausted other places for enormous speculative financial investments and now see agriculture and agricultural land as the new frontier.

Climate smart agriculture begins with deception by not making a differentiation between the negative effects of industrialized agriculture and the real solutions offered by traditional sustainable peasant agriculture which has contributed to alleviating poverty, hunger and remediation of climate change.

Climate smart agriculture will lead to further consolidation of land, pushing peasant and family farmers towards World Bank Projects, the Food and Agriculture Organization (FAO) and other institutions, creating dependency on so-called new technologies through their complete packages that include prescriptions of “climate smart varieties”, inputs, and credit, while ignoring traditional tried and true adaptive farming techniques and stewardship of seed varieties in practice by farmers.

Reliance on World Bank promoted methods of production and genetically modified seed varieties will only increase the vulnerability of peasants and small-scale producers, as those packages will not allow them to adapt to climate change, nor will they be able to improve their incomes, and will only result in pushing them further into debt and increased dependency.

The idea of increasing agricultural productivity in a sustainable way, or what is now called “sustainable intensification”, is false. Even more so, when one considers that raising yield per hectare through production intensification only increases the income for corporations, financial market speculators, and large landholding farmers. So called “sustainable intensification” is not really about increasing yield per acre, it is more about green-washing large scale industrialized production following the old adage “get big or get out.”

Increasingly, peasant and smallholder family farmers have to produce crops for the commodity market and not for local and regional food systems. They are producing for corporations who are manufacturing unhealthy processed food, fuel and supplies to make other products such as farmed –meat and pharmaceuticals. Peasants and small–scale family farmers will have no choice but to continue to accept the task of feeding the insatiable capitalist food production machine and its speculative activities in the financial markets.

This intensification of production is also an effort to reduce the cost of labor, which means further degrading working conditions, and lower salaries for migrant workers.  Most peasants and small holders will be cast aside because there’s no room for them in industrial agriculture except as landless peasants and one of millions of migrants that are seeking to try their luck as low wage laborers in the cities and countryside.

Ultimately, climate smart agriculture tries to cover-up and hide the need for genuine agriculture and land reform. It also hides, and lies about, the issue of scarcity of land and natural resources.  Land and natural resources are only scarce for peasant and small holding farmers. Poverty exists as a result of lack of access to land, land tenure and use, the unfair treatment and wages of workers and an unrelenting exploitation of their labor in order to meet the needs of capitalism, all of which is shaping the madness we are facing today.

In addition, climate smart agriculture, like the Reduction for Emission on Deforestation and Forest Degradation (REDD), will expand the carbon market and its use for financial speculation. The possibility of big profits with investments in carbon credits generated from farmlands involved in climate smart agriculture projects will increase speculation in the carbon market, leading to further “carbon land grabs” by large-scale investors and producers, and the further displacement of peasant and smallholder farmers, just as REDD displaces indigenous people.

Under this climate smart agriculture framework, there is little hope of reducing and removing greenhouse gases, trying to solve food insecurity or any significant rural economic and social development. The problems of poverty, food insecurity and climate change are not market failures, but rather are structural flaws that will persist and worsen with its implementation.

Today, just as in the past, we are ready to fight against the false solutions of the capitalist “green economy” and for real solutions to climate change and poverty, through our demands for climate and environmental justice.

We continue to propose and put into practice wherever we can agroecological production and the construction of people’s food sovereignty. We consciously do this as another space to bring about the structural changes that we really need to deal with the issues of poverty, climate change and peoples’ inability to feed themselves.

We call on all social movements gathered in New York to denounce climate smart agriculture as a false solution, oppose the launching of the Global Alliance for Climate-Smart Agriculture by UN Secretary General Ban Ki-moon at the UN Climate Summit in New York City, and to join us in the struggle for food sovereignty, and for a different model of agriculture and food production that will provide a just economic well being for small-scale farmers and their communities while producing enough healthy food to meet people’s nutritional needs and guaranteed access to food for everyone. Any method of production and consumption, to be truly sustainable, must enrich and protect Mother Earth.

No to Climate Smart Agriculture!

Yes to land reform and agroecology!