Protests, marches and direct actions are vitally important, but to win our goals we need to build mass, democratic political organizations 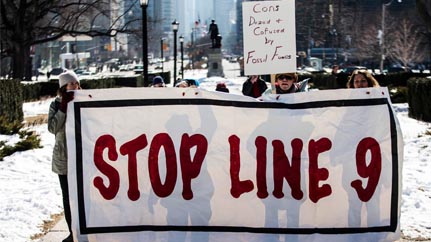 Umair Muhammad is the author of Confronting Injustice: Social Activism in the Age of Individualism.

On July 14 a dozen or so activists staged an occupation of a worksite in Toronto associated with Enbridge’s Line 9, an oil pipeline that runs across the Province of Ontario. Double the number of activists, including some from the July 14 occupation, disrupted work at another pipeline site outside of Cambridge, Ontario on July 17 and 18.

Almost 40 years in age, Line 9 was built to carry conventional oil from Montreal to Southern Ontario. Enbridge recently applied to reverse the flow of the pipeline and to have it carry bulkier diluted bitumen from the Alberta oil sands as well as less stable fracked Bakken oil. The company’s plan was given the green-light by Canada’s National Energy Board earlier this year after a token review process. Enbridge is currently in the midst of making the technical changes needed to reverse the flow of the pipeline.

The reversal project drew the ire of activists across Ontario soon after it was brought to public attention. By now the movement against the project has grown to a notable size, with numerous grassroots initiatives popping up to conduct public outreach, political lobbying, and direct actions. The efforts organized around Line 9 in Toronto alone have managed to achieve a noteworthy scale.

Crucially, these efforts have sought to highlight not only the environmental risks associated with project, but have also raised concerns about democratic oversight and indigenous sovereignty. Rallies in the city against the pipeline routinely draw impressive crowds, forcing the media to give them attention and keeping discussion of the issue alive among the public.

In 2010 Enbridge’s Line 6B, which runs across the State of Michigan and had newly begun carrying diluted bitumen, burst and spilled 3 million litres of oil into the Kalamazoo River. Activists point out to the similarities between Line 6B and Line 9 – both are similarly aged and both were built to carry conventional oil. They highlight the risk of a spill occurring in one of the many watersheds Line 9 runs through. They also note that the reversal project would facilitate the expansion of the Alberta oil sands mega-project, the single largest contributor to Canada’s greenhouse gas emissions.

At the very least, activists demand that a comprehensive environmental assessment be undertaken to evaluate the risks associated with the Line 9 reversal. The ideal scenario, of course, would be a complete halt to the project and others like it, in part making up an effort to transition away from our reliance on fossil fuels.

The two occupations, which I had the chance to take part in, were planned to stop work on “integrity digs” being done by Enbridge. The first occupation resulted in a one-day stoppage of work. The second resulted in stopping work for at least two days and resulting in work equipment, including a huge excavator, being carried off site by Enbridge.

The occupations were in part meant to serve as precursors for larger actions to come, allowing the activists involved to build links and gain experience. Encouragingly, they obtained a fair amount of media coverage. Beyond these benefits, there were few material outcomes. Indeed, the occupations were, more than anything, symbolic actions. Enbridge remains on course for having the pipeline reversal successfully implemented.

And while continually growing pressure may create substantive delays for this particular project and maybe even a complete halt of it, the wider goal of drastically reducing our reliance on fossil fuels will hardly be in sight of being achieved.

During the occupations, in thinking about what we were up to, much of the time my thoughts were on a passage in Howard Zinn’s You Can’t Be Neutral On A Moving Train. In the autobiographical book, Zinn writes about taking part in a large anti-war demonstration in 1971 in Washington, D.C. The twenty thousand protesters that were present gave themselves the task of “shutting down the city.” The protestors broke themselves up into affinity groups, each deciding its own method of contributing to the goal. “The idea was to avoid centralized, bureaucratic organization.”

As part of one affinity group, Zinn, along with Noam Chomsky, Daniel Elsberg and several other unlikely candidates for the activity, played a game of cat and mouse with police while trying to stop traffic. Reflecting on what they managed to achieve that day, Zinn wrote: “Truth is, symbolic actions (we were not accomplishing anything by blocking the street) always feel a little bit bizarre.” Anyone who has taken part in demonstrations, blockades and occupations has at times surely been confronted with similar feelings.

I was also thinking about Gandhism during the occupations. Direct action of the kind we were engaged in has come to be closely associated with the legacy of the wise Mahatma.[1] As is well known, Gandhi’s efforts to win India’s independence from Britain often took the form of non-violent civil disobedience, of which the 1930 Salt March is perhaps the most widely known example. In contrast, little known or talked about are his (likely more important) efforts to shape the Indian National Congress into a party that could lead the country to independence and be prepared to govern it afterwards.

Gandhi, writes the historian Perry Anderson, “was a first-class organizer and fund-raiser – diligent, efficient, meticulous – who rebuilt Congress from top to bottom, endowing it with a permanent executive at national level, vernacular units at provincial level, local bases at district level, and delegates proportionate to population, not to speak of an ample treasury.” Crucial to Gandhi’s program of reforming Congress was its transformation from a party of Indian liberal elites into one that was in touch with the masses.

About the misgivings one should have of what Congress was (and especially what it would turn into), a considerable amount could be said.[2] But without Congress, or something like it, independence for India would not have been forthcoming. The campaigns of mass civil disobedience led by Gandhi would not have been able to secure freedom on their own. Congress provided a forum to have debates and discussions, attract and produce leaders, fashion collective positions on issues of concern, and vie for increasing amounts of influence and power.

The role of Congress in the struggle for Indian independence is an important consideration in a time like ours, when all we seem to have on hand in fighting for change (at least in the case of North America) are the likes of marches, demonstrations, blockades and occupations, sprinkled in among always-ongoing public education efforts.

Our situation is in many ways very different from the India of Gandhi’s time. India was then an underdeveloped country under the direct colonial rule of a geographically far-off nation. We in North America today live in the wealthiest societies that have ever existed and are trying to overcome oppressions that do not have as clearly obvious solutions as kicking out a far-off occupying power. Differences such as these should make it clear that we cannot simply copy the approaches that worked in a particular place at a particular time.

But by no means can we completely disregard the lessons of past struggles.

In a lecture given to the Hammersmith Socialist Society in 1893, the revolutionary writer and artist William Morris noted the following: “If our ideas of a new Society are anything more than a dream … three qualities must animate the due effective majority of the working people; and then, I say, the thing will be done.” The three qualities Morris had in mind were “intelligence enough to conceive, courage enough to will, and power enough to compel.”

The last of these, power enough to compel, hardly ever seems to be a consideration of activism in our time. The fact that power, and indeed compulsion, will be required to reorder society seems a wholly suspect idea to us. Power: Isn’t that what the people in charge have? And won’t we be just like them if we were to have it? All of this tepidness about power isn’t helped by the fact that we live in a time when practically anything that could involve centralization and hierarchy is equated with vanguardism.

The fact remains, however, whatever the anti-hierarchical, anti-centralization, and anti-compulsion biases of modern activism may be: It’s going to take procuring power to get done what we need.

This does not mean that protests, marches, and direct actions need to be put on hold, but that they need to be supplemented with organization-building. One thing we learn from past efforts to build mass, democratic political organizations is that these things take time.

The urgency of the environmental crisis perhaps makes us unwilling to put energy into efforts that have long gestation periods. There doesn’t seem to be a way around it, however. We’re just going to have to commit to being in this for the slow-and-long haul.

[1] There are, of course, important differences between Gandhian civil disobedience and the kind we most often practice today. Gandhi’s approach involved breaking unjust laws and welcoming the fury of the state, including baton charges, arrests, detainment and criminal sentencing. Most of us who take up civil disobedience today, including myself, do not seem to have the resolve to welcome the repression that can comes with breaking laws and custom. We would rather avoid facing rubber bullets, arrest and criminal proceedings.

[2] There were a fair number of things about Gandhi himself that should be subjected to criticism. His dressing up of politics in a religious garb, his misappropriation of radical rhetoric, the irresponsible position he took in response to the demands made by the Dalit community, and his willingness to set aside non-violence when it suited him (as in the case of Kashmir) are noteworthy examples. But, despite the sometimes problematic nature of his decisions and his overall approach, no one would deny that his invaluable contributions to the independence struggle offer important lessons for activists today.