Ian Angus replies to Anders Ekeland: Ecosocialists must understand and build on James Hansen’s entire program, not reduce it to a single policy that isn’t suitable for building mass movements.

In A left ‘exit strategy’ from fossil fuel capitalism? published in Climate & Capitalism last week, Norwegian socialist Anders Ekeland urges ecosocialists to support the climate change program proposed by one of the world’s most-respected climate scientists, James Hansen, in many essays and speeches and in his book, Storms of my Grandchildren. In support of his argument, Ekeland particularly cites John Bellamy Fosters’ article James Hansen and the climate-change exit strategy, published in Monthly Review in February 2013.

I entirely agree that Hansen’s proposals are an important contribution to building a global movement to reduce greenhouse gas emissions by radically reducing the use of fossil fuels, and I fully endorse Foster’s discussion of Hansen’s program. That’s why, contrary to Ekeland’s assertion that Climate & Capitalism has ignored the subject, we recommended Foster’s article to C&C readers just days after it was published. Indeed, months before that C&C published a short article by Hansen that argued for his fee and dividend plan. Obviously we could have done more, but Ekeland is simply wrong to say there has been “no discussion” of this in C&C.

It’s good to have more attention drawn to this important issue, but unfortunately Ekeland reduces Hansen’s program to just one element – fee and dividend – entirely omitting many essential components. He compounds that error by using fee and dividend as a starting point for defending carbon taxes in general.

These omissions and additions reflect a deep misunderstanding of Hansen’s program. If it were as limited as Ekeland’s article implies, it would have little relevance to ecosocialist organizing.

Hansen calls his fee and dividend plan the “essential backbone” of his proposals for reducing greenhouse gas emissions. Under it, a substantial fee would be levied on all fossil fuels at the well head, mine shaft, or point of entry, and subsidies to the fossil fuel industry would be eliminated. The fee, which would increase in predictable steps over time, would be paid by fossil fuel companies, and each month every legal resident would receive an equal share of the money collected, as a direct bank deposit or debit card.

This would directly increase the price of fossil fuels as such, and indirectly increase prices for products and services that use fossil fuels, but Hansen calculates that the poorest 60% of the U.S population, who generally have small carbon footprints, would receive more in dividends than they would pay in increased fuel and other prices.

The plan would be more transparent and easier to administer than other proposed schemes. If done properly, it would create an economic incentive for both corporations and consumers to reduce their carbon footprints by increasing energy efficiency and switching to alternatives.

Although Ekeland argues that the left should adopt the fee and dividend plan as the basis of a “common strategic campaign to mobilize people for an exit from fossil fuel society,” he is peculiarly ambivalent about one of its central features, the 100% direct dividend distribution.

On one hand, he appears to accept Hansen’s case for a direct dividend: “‘Climate’ money each month going into poor people’s bank accounts would unite the demand for income redistribution with working people’s fundamental long-term environmental demand for a healthy planet.” But elsewhere he contradicts himself by describing the plan as “adapted to the U.S. political context” and “completely individualistic,” and suggesting that in other countries the money collected could be spent by government on social projects.

Such confusion is disturbing. Unlike every actual carbon tax plan proposed or implemented in the world today, Hansen’s fee and dividend plan has a strong class component: it would take from rich corporations and give to the poor, creating a material incentive for working people to support the carbon fee and oppose corporate efforts to weaken it. If the money goes into government projects, no matter how worthy, it will be seen as just another attack on working class living standards, and how it is spent will be subject to the whims of capitalist politicians.

Is that all there is?

Anyone who reads only Ekeland’s article would conclude that Hansen’s “exit strategy” is just fee and dividend, nothing more. The readers who have commented that the plan is insufficient are judging Ekeland’s presentation, not Hansen’s, because, contrary to the impression Ekeland creates, fee and dividend is only one aspect of Hansen’s exit strategy.

Other key measures in Hansen’s program include:

Hansen is very clear that stopping coal and unconventionals is the one measure without which all else will fail, but Ekeland doesn’t mention that or any of the other measures Hansen proposes. 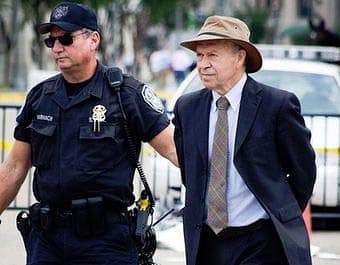 James Hansen being arrested at a protest against the Keystone XL pipeline, which he calls “the fuse to the biggest carbon bomb on the planet,” because it would carry Alberta tar sands crude.

As Foster says, the policies Hansen considers to be essential are shown not just by what he writes, but by his actions. “He has been arrested in an attempt to block coal-fired plants and in a protest over the Keystone XL pipeline designed to bring Alberta tar sands oil to the Gulf of Mexico. His activism, and willingness to be arrested in relation to these issues, shows what he considers to be essential. … A mere increase in the carbon price is insufficient where coal and unconventional fossil fuels are concerned, and actual bans are necessary.”

How does fee and dividend fit in? It’s evident from his books and articles that Hansen sees it as a framework for high-level negotiations. He writes, “the key requirement is that the United States and China agree to apply across-the-board fees to carbon-based fuels.” They would force others to follow suit by imposing import duties on products from countries that don’t levy a carbon fee.

Given that approach, it’s not surprising that Hansen’s fee and dividend advocacy mainly involves lobbying politicians and governments, rather than grassroots action. That’s why Foster, while recognizing its progressive features, says fee and dividend is “mostly a top-down, elite-based strategy.”

And that’s why fee and dividend can be part of a radical action program against climate change, but isn’t sufficient by itself, and isn’t suitable for building the mass movements that socialists know are needed.

All out for carbon taxes?

Ekeland believes that left’s lack of enthusiasm for Hansen’s plan reflects a “long tradition of quite correctly fighting against indirect, regressive and socially unjust taxes.” I agree: most of the leftish criticisms of Hansen that I’ve seen have failed to see the broad range of measures that Hansen advocates, and the important ways in which fee and dividend differs from most carbon tax plans.

But having said that the left has “quite correctly” opposed such taxes, Ekeland promptly reverses himself, calling opposition to tax-driven price increases “a fairly dogmatic tradition.” He strongly criticizes me, Simon Butler, Tim Anderson and Daniel Tanuro for pointing that in the real world – not some fantasy world where taxes are imposed by impartial governments for the common good – most plans to “put a price on carbon” hurt working people while boosting corporate profits.

Rather than discussing Hansen’s full program, Ekeland uses one of its proposals as a jumping-off point to argue that using taxes and markets to influence consumer behavior is the only practical and effective way to reduce emissions. Leftists who disagree display “a lack of understanding of markets as a social institution.” He points to the fact that sales of electric cars jumped in Norway when taxes on them were cut as proof that “when the prices and context change, behavior can change.” By implication, the emission problem is caused by consumer behavior, and fixing the market is the solution.

The alternative, which he calls “command-and-control regulation,” is not only “totally unrealistic” but would likely lead to “black markets for energy, with horrific prices and speculation.” No wonder he doesn’t mention that Hansen’s program features an outright ban on coal and unconventional fuel production!

This isn’t the place for a full discussion of the advantages and (mostly) disadvantages of trying to use markets to solve environmental problems. The key point is made clearly in Foster’s article: “All exclusively market-based strategies tend to backfire, since they rely principally on economic incentives. Hansen’s fee and dividend is necessary under present conditions but is only a single wedge in what must be a much more comprehensive climate-change exit strategy.”

Ekeland reduces Hansen’s program to a single wedge, and his contradictory comments about direct dividends reveal confusion about key aspects of that. It is very difficult to see how his approach can be considered consistent with James Hansen’s climate change exit strategy.

While I disagree with him on important issues, I greatly appreciate Anders Ekeland’s initiative in opening a discussion on climate change exit strategy. Only through open and frank debate of these issues can we develop the action program that ecosocialists and other radical green activists need. I look forward to a thoughtful discussion in the Comments section below, and I’m sure Climate & Capitalism will publish further articles on this subject.