The Harper government is closing libraries, trashing documents and firing thousands of scientists — while handing out billions to oil companies 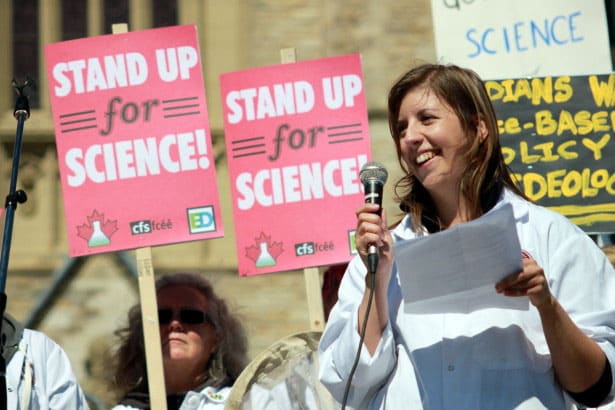 Dr. Katie Gibbs speaks at a Stand Up for Science rally at Parliament Hill in Ottowa last September.

Seven of Canada’s most prized scientific libraries are being shut down and some of their contents have already been burned, thrown away or carted off by fossil fuel consultancy firms. This development is part of a Harper administration plan to slash more than $160 million in the coming years from the Department of Fisheries and Oceans, or DFO — an agency charged with protecting the country’s vast waterways.

The Harper government has portrayed the move as necessary in order to reduce the country’s deficit and provide Canadians with greater access to scientific information through the Internet. But alongside the cuts, the Harper administration has doled out billions in subsidies to the fossil fuel-dominated energy sector — $26 billion in 2011, according to a recent International Monetary Fund report. As for accessing the information at the shuttered libraries, an internal DFO document labelled “secret” obtained by Postmedia News in late December, along with the scientists who utilize the research facilities, tell a different story.

The once-secret DFO document speaks of “culling” materials in the libraries, a term that critics believe to be far more devastating than it sounds. Much like its original meaning — the killing of animals with undesired genetic traits — they see the budget cuts as a way to do away with undesirable science.

The Harper administration has long been known for its anti-environment stance. Harper’s environment minister, for instance, has publicly cast doubt on research documenting Arctic sea ice melt. Observers have also complained of a revolving door between the government and industry that has effectively placed Canada’s natural resources at the disposal of fossil fuel corporations supporting hydraulic fracturing, carbon-rich tar sands extraction and pipeline projects.

In the process, a host of conservation laws and sovereignty treaties with Canada’s First Nations population have been unwound at the behest of oil and gas lobby groups. The Center for Global Development ranks Canada last among wealthy nations in terms of environmental protection.

Meanwhile, 2,000 government scientists have been fired over the past five years and hundreds of environmental programs that monitor food, water and air quality, study and prevent oil spills, as well as track atmospheric changes have been shut down for lack of funds.

Dr. Katie Gibbs with Evidence for Democracy, a grassroots organization composed of scientists mobilizing against the culling, said it is only the latest development in a “long trend.”

“Over the past few years we’ve seen huge cuts in funding for science, layoffs for scientists who work for the government and reduced funding for academic scientists,” Gibbs said. “Some are calling it a war on science.”

British Columbia’s independent online news magazine The Tyee detailed the scope of the latest assault, citing several research hubs where scientific literature has been trashed, burned or picked apart. According to The Tyee, they include, “[The] Maurice-Lamontagne Institute, which housed 61,000 French language documents on Quebec’s waterways, as well as the newly renovated $62-million library serving the historic St. Andrews Biological Station in St. Andrews, New Brunswick.”

Also shut down were “the famous Freshwater Institute library in Winnipeg and one of the world’s finest ocean collections at the Northwest Atlantic Fisheries Centre in St. John’s, Newfoundland.”

In a fitting addendum to this assault on science, the magazine noted that Rachel Carson — a founder of the modern environmental movement — corresponded with researchers at St. Andrews while writing her pioneering book on environmental contamination, Silent Spring, half a century ago.

According to Gibbs, whose group is circulating a petition against the cuts, “There’s no way this information was digitized. Many scientists have spoken out and said that everything is being done in a huge rush, completely disorganized. Private companies came and picked up truck loads of this material. They saw the value in it.”

The gas and dam powered-utility, Manitoba Hydro, plus North/South Consultants — a firm that counts oil and gas corporations among its clients in heavily-fracked Manitoba — obtained troves of research documents pertaining to water treatment and aquatic habitats from Winnipeg’s Freshwater Institute. Scientists have also reported witnessing the incineration of literature at DFO libraries and one researcher at the Maurice Lamontagne Institute in Mont Joli, Quebec posted a photo online of a dumpster full of discarded books and journals. Although, scientists have done their best to salvage the research, more federal libraries are slated for culling.

Like the indigenous-led Idle No More movement and the climate activists who raised a sign that read “climate justice” over the prime minister’s head at a Vancouver Board of Trade meeting earlier this month, scientists are increasingly standing up to Harper, though doing so comes with great risk to their careers.

Last fall, Evidence for Democracy staged “Stand Up for Science” rallies in 17 Canadian cities against legal restrictions to their ability to share research and communicate with the public — one of the first steps in the so-called war on science taken by the Harper administration upon its ascent to power in 2006.

“The restrictions play into the library closures,” said Gibbs. “When scientists have spoken out they’ve had to do so anonymously because they fear for their jobs.”

According to critics of the Harper administration, such attacks on science are part of the prime minister’s small government, big business ideology, which assigns a negative value to any science that adversely impacts the production of fossil fuels.

“If you are going to be in favor of fossil fuel expansion, and tar sands in particular, and you are going to try to sell that to the Canadian public — part of doing that means dulling the awareness and importance of science,” said Rodger Annis, a Vancouver-based environmental activist and writer. “Science tells us in stark terms that if we want to prevent the very serious consequences of climate change then we have to leave the tar sands in the ground.”

While the Harper administration may be able to dull, or even subvert the science behind such a message, it’s the scientists who are proving difficult to silence. And perhaps that’s just what’s needed. After all, science is only as strong as the scientists behind it.