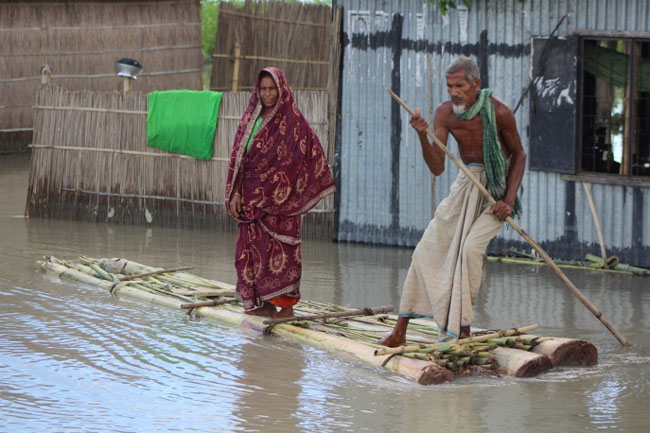 Villagers escape flooding in the Gaibandha district, Bangladesh in 2011

[Aside from quotations, the opinions expressed in this article are those of the author.]

“Bangladesh is a world leader in adaptation to natural disasters,” Bangladeshi community organizer Nasima Akter told a Toronto audience January 8. “But now climate change threatens to wash away all our gains.”

Akter had been invited by East End Against Line 9, a neighbourhood committee formed to protest a proposed cross-Toronto tar-sands pipeline. The East End committee wanted to learn about the implications of Canada’s reckless tar-sands development for a poor and vulnerable nation.

“Bangladesh is ranked first as a disaster-prone area of Asia and the Pacific,” explained Akter, Executive Director of the Bangladeshi-Canadian Community Services in Toronto. “More than ten million of its 160 million population are affected by natural disasters each year,” she said; the average yearly death toll is above 6,000. More than half the world’s yearly deaths from cyclones occur in Bangladesh.

The country is low-lying, prone to flooding both from the ocean and the major rivers that snake through the lowlands, Akter said. Such floods affect, on average, more than seven million people a year.

This inherent vulnerability to natural disaster is now being dangerously escalated by climate change. “Between 1974 and 2004, Bangladesh experienced eight major floods of the type that are considered once-in-twenty-year events,” Akter said.

Moreover, the ocean is encroaching. “The sea level is expected to rise 12 to 43 centimetres in this century alone, affecting a population of seventeen million.” Expansion of the ocean is a known side-effect of global warming. Warming is also known to increase extreme weather events of all types, leading in Bangladesh to excesses of both rain and drought.

“Climate change implies serious vulnerabilities in agricultural yield and natural resources availability, with consequent effects on industries directly dependent on these inputs. Ultimately, all business, economy, and ecosystem is affected.”

Bangladeshis has responded vigorously to these threats. “Despite all these climate change–related disasters, Bangladesh’s economy and food production have continued to grow. Poverty has fallen, and in just over 20 years, the country has managed to bring half of its poor above the poverty level,” Akter said.

“Child mortality is down, life expectancy has increased, there has been progress in gender equality. The country is on track to meet all of its Millennium Development Goals by the target year of 2015. Bangladesh is also set to achieve 100% school completion.”

Akter quoted Indian Nobel Prize–winning economist Amartya Sen: “In most of the social indicators Bangladesh has gone ahead of India,” whose per-capita national product is more than twice as high.

But the threat to Bangladesh is escalating uncontrollably, and the country cannot cope with it by itself.

Akter spoke while Toronto was recovering from a massive ice storm that knocked out power to 1 million residents – one of the extreme weather events that have grown more frequent here as we begin to feel the grip of climate change. In bitter cold and with the sidewalks icy, it was a good night to stay home. Yet the Bangladesh forum was among the largest educational/planning events that East End Against Line 9 has held.

The East End committee was formed to sound the alarm around a threat to the civic environment: a proposal to pump toxic diluted bitumen (tar sands) through a cross-city pipeline. But engaging with this apparently local issue has required assessing Canada’s tar-sands project as a whole plus how extracting and burning tar sands speeds climate change.

In the discussion following Akter’s talk, participants suggested that Canada’s unrestricted and escalating carbon emissions, which fuel climate change, were a significant contributing factor to extreme weather events in Bangladesh. The Canadian government has now admitted in an official report to the United Nations that the bankruptcy of its promises to reduce carbon emissions. The Guardian reports:

“Canada’s carbon emissions will soar 38% by 2030 mainly due to expanding tar sands projects, according to the government’s own projections. In a new report to the United Nations, the Harper administration says it expects emissions of 815 million tonnes of CO2 in 2030, up from 590Mt in 1990.

“Emissions from the fast-growing tar sands sector is projected to quadruple between 2005 and 2030, reaching 137Mt a year … the report shows. Worse, Canada is likely under-reporting its emissions. Canada had promised a 20% reduction in emissions by 2020; instead, they will grow 20%.”

Has the Stephen Harper government given even a thought to the effect of the country’s carbon emissions on Bangladesh? Perhaps. Its official travel advisory warns Canadian vacations of tsunamis and seasonal flooding in Bangladesh; every year “a third of the territory is seriously affected.”

Its foreign ministry (on a page posted by the government agency CIDA), identifies Bangladesh as “a country of focus” for Canadian foreign aid. The statement notes Bangladesh’s poverty, its vulnerability to natural disasters, and its striking social progress. But it does not mention the impact on Bangladesh of climate change.

Of course not. It’s up to ecological activists, like those in East End Against Line 9, to demonstrate the devastating impact of Canada’s spiralling carbon emissions on poor countries like Bangladesh and, ultimately, on us all.