The term oil sands was invented by public relations flacks, to divert attention from just how dirty the Alberta bitumen deposits are. Andrew Nikiforuk explains why tar sands is the right name.

“Passing off tarlike bitumen as oil is about as accurate as calling an aspen tree a Douglas fir, or a donkey a horse.”

Not long ago, U.S. President Obama made headlines in Canada by using the term tar sands to describe Canada’s fastest-growing source of greenhouse gases. Our petro-politicians dislike that term intensely – they are oil sands, if you please.

But Obama was right. Tar sands is what they are.

Although they don’t like to admit it now, for decades the government and the oil companies and everyone else used the term tar sands for Alberta’s bitumen deposits. The name wasn’t changed until rising oil prices made it profitable to dig them up.

Then the Alberta government started saying “oil sands,” as a public relations maneuver similar to changing Kentucky Fried Chicken to KFC. But Colonel Sanders still sells parts of factory-farmed birds, drenched in fat — and the stuff they’re mining in Alberta is still not oil. Bitumen by another name will still poison rivers and wreck the climate.

An excellent explanation of what the tar sands actually are – and why that term is absolutely correct – appears in Andrew Nikiforuk’s important book, Tar Sands: Dirty Oil and the Future of A Continent.

Our thanks to Greystone Books for permission to post this except. 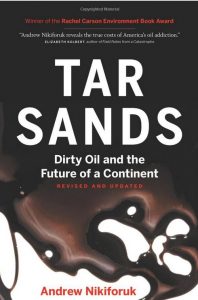 Industry executives and many Canadian politicians get upset when they hear the term tar sands. They think tar is “greenie speak,” a tasteless pejorative for the largest deposit of oil outside of Saudi Arabia (175 billion barrels). Marketers and CEOS prefer the word oil in relation to the sands because it sounds abundant, accessible, and clean. Oil raises investment cash faster than tar does, and it reassures consumers nervous about the ever-rising price of fossil fuels. An emerging energy superpower such as Canada doesn’t mine and upgrade nasty bitumen; it produces oil.

The Alberta government says it makes sense to describe the resource as oil sands “because oil is what is finally derived from bitumen.” If that lazy reasoning made sense, Canadians would call every tomato ketchup and every tree lumber. Passing off tarlike bitumen as oil is about as accurate as calling an aspen tree a Douglas fir, or a donkey a horse.

Bitumen looks like black molasses and smells like asphalt. In fact, Canada’s National Centre for Upgrading Technology says that “raw bitumen contains over 5o per cent pitch.” The black goo makes a com­petent road cover, and the Hudson’s Bay Company once used it to repair leaky roofs and canoes. But it’s a dirty, ultra-heavy hydrocarbon and a damned expensive substitute for light oil.

Bitumen is one viscous resource. Brent Blend, a mix of light oils from the North Sea, has an API gravity of 38 degrees. (The API is a stan­dard unit of measurement used by the American Petroleum Institute.) Athabasca bitumen is much denser, with an API gravity of 7.9 degrees. (All of Alberta’s bitumen deposits differ in their density and sulfur con­tents.) Because of its stickiness, bitumen cannot move through a pipeline without being diluted by natural gas condensate or light oil.

Dr. Steven Kuznicki, a scholar at the Imperial Oil-Alberta Ingenuity Centre for Oil Sands Innovation, calls bitumen some of the “ugliest stuff you ever saw … contaminated, non-homogenous and ill-defined … Bitumen is five per cent sulphur, half a per cent nitrogen and 1,000 parts per million heavy metals. Its viscosity [stickiness] is like tar on a cold day. That’s ugly.”

Millions of years of bacterial degradation have made bitumen noto­riously carbon rich and hydrogen poor. As a consequence, industry must reverse geological time with energy-intensive upgrading to make bitumen marketable. In the upgrading process, some carbon (coke) is removed, and hydrogen is added to create synthetic crude. Upgrading bitumen requires so much fuel that the process typically adds any­where between 100 and 200 pounds of cot per barrel to bitumen’s large carbon footprint.

Unlike light oil, bitumen contains a host of contaminants, includ­ing sulfur, salts, nitrogen, clays, asphaltenes, resins, and heavy metals such as nickel and vanadium. As one example, Western Canadian Crude, a poor quality feedstock made from bitumen, synthetic crude, and light oil, has a sulfur content eight times greater than that of high-quality Texas oil. North American refineries, built to handle light oils, have raised numerous concerns about their ability “to clean and pro­cess diluted bitumen.”

The Canadian Industrial End-Use Energy Data and Analysis Centre concluded in 2008 that synthetic crude oil made from bitumen had “the highest combustion emission intensity” of five domestic petroleum products and was “the most energy intensive one to process” in Canada.

Rick George, president and CEO of Suncor, highlighted bitumen’s thoroughly roguish nature in a 2008 speech to the World Heavy Oil Congress. Although he prefers the term oil sands, George unwittingly made a good argument for calling the stuff tar. Bitumen may contain a hydrocarbon, he said, but you can’t use it as a lubricant because “it con­tains minerals nearly as abrasive as diamonds.” You can’t pump it, because “it’s as hard as a hockey puck in its natural state.” It doesn’t burn all that well, either; “countless forest fires over the millennia have failed to ignite it.” All in all, George said, the resource “has no value, other than the value we create.”

In 1983, engineer Donald Towson made a good case for calling the resource tar, not oil, in the Encyclopedia of Chemical Technology. He argued that the word accurately captures the resource’s unorthodox makeup, which means it is “not recoverable in its natural state through a well by ordinary production methods.” Towson noted that bitumen not only has to be diluted with light oil to be pumped through a pipeline but requires a lot more processing than normal oil. (Light oil shortages are so chronic that industry imported 50,000 barrels by rail last year to the tar sands.) Even after being upgraded into “synthetic crude,” the product requires more pollution-rich refining before it can become jet fuel or gasoline.

“Professor Nositall” at the Oil. Sands Discovery Centre in Fort McMurray accepts these facts.. The cartoon character reminds visiting children and journalists that untreated bitumen will not flow an inch: “It is too thick to pump, too thick to collect in wells and too thick to move in pipelines.”

Bitumen is what a desperate civilization mines after it’s depleted its cheap oil. It’s a bottom-of-the-barrel resource, a signal that business as usual in the oil patch has ended. To use a drug analogy, bitumen is the equivalent of scoring heroin cut with sugar, starch, powdered milk, quinine, and strychnine.

Calling the world’s dirtiest hydrocarbon “oil” grossly diminishes the resource’s huge environmental footprint. It also distracts North Americans from two stark realities: we are running out of cheap oil, and seventeen million North Americans run their cars on an upgraded version of the smelly adhesive used by Babylonians to cement the Tower of Babel.

That ancient megaproject did not end well. Without a disciplined plan for them, the tar sands won’t either.

Excerpt from the book Tar Sands: Dirty Oil and the Future of a Continent by Andrew Nikiforuk, published in 2010 by Greystone Books Ltd. Reprinted with permission from the publisher.