No tar sands company has complied with regulations to clean up tailings ponds. No problem, says the regulator. The rules are “overly optimistic”

Here’s a suggestion for Alberta drivers. The next time a cop  stops you for speeding, tell him that the highway code is overly optimistic. He’ll let you go.

If you don’t have a valid drivers license, tell him you were overly optimistic about your ability to pass the test. He’ll let you continue driving.

At least he will if you get the same treatment as the super polluters who mine the Alberta tar sands.

In the Tailings Management Assessment Report released this week, the Alberta Energy Resources Conservation Board (ECRB) says that no tar sands company has complied with regulations requiring them to clean up their tailings ponds. But that’s okay, there will be no penalty, because the regulator says the standards the industry agreed to in 2009 were “overly optimistic.”

“Tailings ponds” is a euphemistic name for massive lakes of toxic sludge, used to store  the liquid effluent created by tar sands mining. For every barrel of oil there are six barrels of this oily goo. Of the 25 chemicals found in every tailings pond, 14 are known carcinogens. The ponds themselves are large enough to be seen from space — over 900 million cubic metres, covering an area greater than 170 square kilometres.

This is what one of these blights looks like: 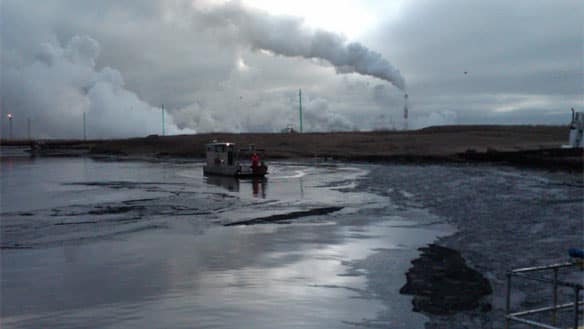 In theory, the poisons eventually sink to the bottom. leaving clean water that can be reused. In theory, the land will eventually be reclaimed and returned to its original state. In practice not one has been reclaimed, and they are leaking poison into the Athabaska river.

Not only have those targets not been met, the total volume of tailings dumped into the Alberta landscape has risen 27% since the regulations were established.

But that’s okay. The executive manager of the ECRB says:

“Both industry and ourselves are finding that we were overly optimistic as to how quickly they could integrate various significant tailings management equipment and operations into those complex facilities.”

In other words, it isn’t easy being green, so we won’t insist.

The ECRB report does not set any new compliance targets, and it does not plan to report on tailings again for two years.

Given the industry’s long record of successfully evading regulation, no one should be overly optimistic about a tailings cleanup.