Review: William Cronon’s history of Chicago is a brilliant ecological history that puts the development of capitalism at the heart of the story 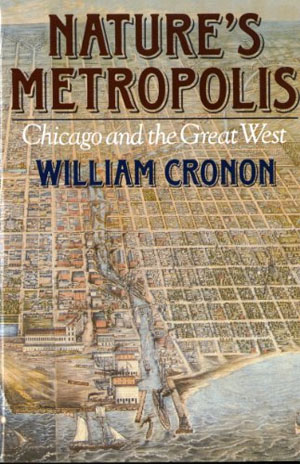 William Cronon’s history of Chicago is a brilliant ecological history that puts the development of capitalism at the heart of the story of the city and shows how the market itself shaped Chicago and its surrounding country. Cronon roots his analysis in a materialist understanding of historical change and his insights are surely applicable to cities around the globe both historically and today.

In the early days of Chicago many American entrepreneurs hoped that Chicago (or other cities like it) would become the great gateway to the American West. They believed in a sort of “geographical determinism” which argued that there were particular parts of the American continent which had the right mix of climate, natural resources and transport links that would enable the city to grow automatically, bringing wealth and profits for everyone.

“In their eyes, nature would combine with the progress of human population to call forth a metropolis to lead the Great West…. triumphant cities of the past, stretching back to classical antiquity, had achieved lasting fame.. because their destiny had been an imperialist one… ‘the ultimate crowning city’ would achieve comparable fame by making all of North America – indeed, all the world – its empire.”

“…the Great West would rise as a commercial hierarchy with its foundation in the rural countryside, and its ascending levels in village, town, and city. At the apex would stand the great central metropolis which was cause, effect, and emblem of its region’s continuing prosperity”

None of this was automatic. What was needed was human intervention that could shape the city and the world around. Cronon begins by looking at three natural resources that ultimately led to the explosion of Chicago’s population and wealth, as well as the transformation of the Great Plains. These were cattle, wood and grain.

The story of the deforestation of enormous tracts of land in order to provide wood for the expansion of American capitalism is not surprising. Cronon’s story of the way that the capitalists ultimately chopped down the very source of their profits echoes a chapter by Engels who uses a similar example from Cuba to demonstrate the short-termism of the capitalist system. It is a familiar ecological story.

So to is the story of beef. Before cattle could be reared in their millions, the Plains had to be emptied of former inhabitants – both human and beast. The massacre of the buffalo was necessary before the beef industry could make its profits. In a brilliantly dialectical passage Cronon explains the way that the destruction fed further changes:

“The bison met their end because their ecosystem had become attached to an urban marketplace in a new way. The very market forces that had led hunters nearly to exterminate the species now encouraged other people to find a suitable replacement… Even before the bison had entirely gone, their heirs apparent – horses, sheep, and especially the longhorn cattle… were already beginning to make buffalo country their own. Called into being by the same urban markets that had sent the hunters scurrying across the plains in the first place, the new herds would be tied to the cities by the same iron rails that had turned the plains into a slaughterhouse.”

But it is the story of Chicago’s grain business that is most fascinating. Here Cronon tells the familiar tale of how the natural world was transformed so that grain could be grown over vast areas. The grasses and animal life of the Plains were destroyed in order to encourage mono-cultural farming so that vast quantities of grain could reach Chicago. But capitalism doesn’t stand still, and it is the story of how the grain industry transformed itself that really captures the imagination.

In the early days farmers would bring their crops to Chicago and sell them onward. The farmers would own the sacks of grain right until they reached the purchaser. What the grain companies did to simplify the process was to turn the grain into a uniform commodity. Each farmer’s stock was graded and then mixed with all the other grain of that type in enormous “elevators.”

The farmer received a receipt that entitled him to money, or a identical amount of grain. As Cronon explains:

“A person who owned grain could conveniently sell it to a buyer simply by selling the elevator receipt  and as long as both agreed that they were exchanging equivalent quantities of like grain – rather than the physical grain that the seller had originally deposited in the elevator – both left happy at the end of the transaction  It was a momentous change… The grading system allowed elevators to sever the link between ownership rights and physical grain, with a host of consequences.”

One of the consequences was the development of a market in grain futures. For the fluctuating price of grain meant that the receipts had changing values. Speculators could buy and sell receipts and make profits on the market. This lead to the issuing of more receipts than there was grain and inevitably there were market booms and crashes as speculators tried to maximise profits.

The madness of the market is summed up on one occasion when number 2 grade grain was selling at a higher price than the better quality number 1, because the market in the former had been cornered and prices artificially inflated.

There are few better examples of the way that capitalism doesn’t just transform the natural world, but also human perceptions of it. As Cronon points out:

“To understand wheat or corn in the vocabulary of bulls, bears, corners, grades and futures meant seeing grain as a commodity, not as a living organism planted and harvested by farmers as a crop for people to mill into flour, bake into bread, and eat.”

This process was encouraged and accelerated by technological development. In particular the rail-roads that took the commodities eastwards and the telegraph that brought the news of price changes. The rail-roads form the basis for a brilliant chapter where Cronon explains how they removed the “isolation that had constrained the trade and production.”

He quotes Marx, pointing out that rail means the “annihilation of space by time” and says that:

“Wherever the network of rails extended, frontier became hinterland to the cities where rural products entered the marketplace. Areas with limited experience of capitalist exchange suddenly found themselves much more palpably within an economic and social hierarchy created by the geography of capital.”

Because he understands the dialectical relationship between city and country, between technology and markets, and humans and nature, Cronon’s story of Chicago is far more than a simple one of urban destruction of the environment. His writing is beautifully clear and his analysis has much to offer us now.

The question of the sustainability of urban life and the impact of cities on the natural world has never been so important and this historical study has a great deal to offer those of us trying to understand this today.