Fred Pearce. The Landgrabbers: The New Fight Over Who Owns the Earth.  Beacon Press, Boston: 2012 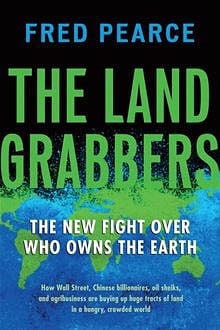 “Buy land. They are not making it anymore.”

This statement, uttered more than one hundred years ago by Mark Twain, still holds a sad and powerful truth and makes a telling start for Fred Pearce’s account in The Landgrabbers: The New Fight Over Who Owns the Earth about the struggle over the Earth’s most precious resources: land and water.

In the book, the reader is taken on a whirlwind tour around the globe to witness, through Pearce’s eyes, a new kind of colonialism driven not by countries, but by powerful private capitalists. We encounter figures such as George Soros and Richard Branson; we learn about the effects of the conflicts in the Democratic Republic of the Congo and Liberia; we find out why President Robert Mugabe’s land seizures in Zimbabwe were not so bad after all for small-scale farmers; and we see how the global financial crisis and the intricate mechanisms of stock market speculations in commodities exacerbate the problem.

Pearce’s passion and outrage about the selling off of communal resources shines through the book. Each chapter is dedicated to a certain country, where protagonists change, yet the storyline stays the same: governments around the globe grant large concessions to wily investors in the hope of advancing their economies but displace and disadvantage large parts of their own population in the process.

As Mike Ogg, an agriculture specialist from Swaziland, told Think Africa Press: “I fundamentally believe that agriculture can lead development in Africa. The quandary is: How do you create a win-win situation where investors and the community benefit?”

Pearce presents a bleak picture of increasingly prevalent ‘land grabs’ by corporations for agriculture or resource exploitation as well as by well-meaning environmentalists for so-called “green grabs.” This is, Pearce argues, encircling the last remaining habitats of indigenous peoples and the landless poor, destroying their past and forever altering their future.

Pearce mixes this narrative with historical references to imperialism and colonialism giving the impression of a continuous cycle of exploitation. But his greatest achievement in the book is to give those exploited a voice. He recounts their stories in numerous interviews, as well as talking to those involved in the land acquisitions and a variety of experts.

Pearce concludes that the bulk of the blame rests with foreign buyers though it is crucial to recognise that most deals are also pursued by respective governments which may give out large land concessions, tax breaks and other incentives to draw foreign capital into their country in the first place. And politicians are not only accomplices, but often also carve out deals in return for money or land for themselves.

This is enabled by an environment in which laws are either non-existent or easily circumvented. As Graziano da Silva, director-general of the United Nations Food and Agricultural Organisation, notes: “It appears to be like the Wild West and we need a sheriff and law in place.”

Although Pearce does not go so far as to propose possible solutions, there is a range of opinion and ideas as to how to begin to tackle the problem.

Olivier De Schutter, UN special rapporteur on the right to food, has suggested that when national governments are unable or unwilling to devise regulations, the international community should step in to monitor whether the rights of land users are being respected. Oxfam’s recent report ‘Our Land, Our Lives’ highlights the pivotal role of the World Bank as an advisor to governments in reforming their laws.

But this is easier said than done. As a representative from USAID in Dar es Salaam admitted to Think Africa Press, “Land tenure, we know, is at the heart of many problems as it is difficult for poor people to feed themselves with limited and insecure access to land, but we are not touching this subject, because it’s too contentious and complicated.”

Another way the negative impacts of large-scale land acquisitions could be mitigated is through emerging sustainability standards. The World Bank and its private sector funding arm, the International Finance Corporation, have strict regulations regarding social and environmental sustainability. These include standards on development-induced displacement and there are growing calls for wider implementation of such regulations.

An example of a private sector-driven initiative is Bonsucro, a certification scheme which aims to ensure companies involved in the production of sugar and ethanol from sugarcane meet environmental, social and business standards. With consumers believed to be increasingly concerned about the impacts of the goods they buy, the Bonsucro certification is meant to reassure buyers that companies are acting in sustainable ways and taking account of human rights and pollution control.

Pearce acknowledges these developments in his last chapter where he analyses some of the attempts at solutions though he does not put forward his own. Nevertheless, Pearce’s book is a worthwhile read. His writing style is highly engaging and reveals the duplicity of investors and interest groups. He not only presents complicated and contentious issues such as the correlation of Wall Street speculations and rising food prices in an accessible manner, but also masterfully interweaves stories and issues across countries and continents achieving a well-researched, logical and informative account.

Although Pearce’s focus lies on the problems at hand rather than solutions, the book certainly contributes to a growing awareness about the issues and will hopefully inspire others to find suitable ways to move forwards.