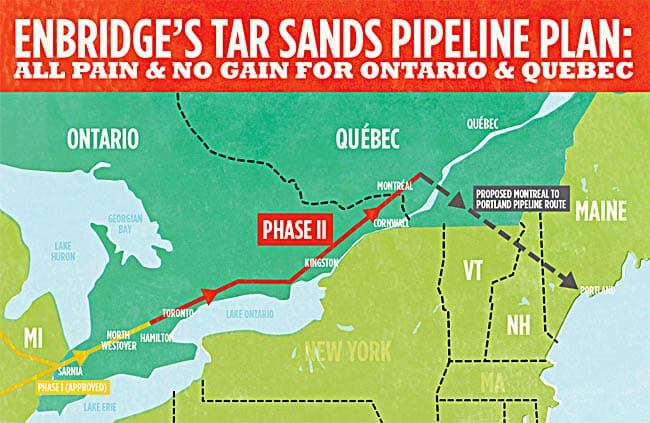 The November 17 conference, “The Tar Sands Come to Ontario: No Line 9,” was a big success. Three hundred people jammed into a lecture theatre at University of Toronto for the plenary session. Every seat was taken, more than 50 people stood or sat in the aisles, and an equal number listened from just outside the door.

The unusually large turnout for an educational teach-in shows clearly that there is now a basis for organized public initiatives against the threat of hazardous tar sands oil being piped across southern Ontario and Toronto through Enbridge Inc.’s “Line 9.”

The all-day conference, which included 16 workshops led by 35 speakers and facilitators, was attended by close to 400 participants in all.

The initial session featured sixteen speakers in six simultaneous workshops. Each workshop took up a different form of the tar sands’ challenge: to communities, to unionized and migrant workers, to the Global South, to climate stability, to native–non-native relations, and to environmental movements.

Following the plenary session, the conference closed with a People’s Assembly. Five workshops considering different issues involved in tar sands resistance were followed by five more bringing together activists in different regions of Toronto and Ontario.

Line 9 was built in 1975 and is now configured to transport imported oil from Montreal to refineries in Sarnia. Enbridge has applied to Canada’s National Energy Board to reverse its direction of flow, so that it can pipe Alberta oil to Montreal. The pipeline giant admits that among the possible uses of Line 9 is transport of “heavy oil,” a category that includes bitumen, the hazardous raw material extracted from tar sands.

Tar sands profiteers now face the prospect of declining demand and declining prices in theU.S., while plans to export the product to the west coast have run into a wall of popular opposition in British Colombia. The oil giants have responded with projects to ship their raw product east to Montreal and  the Atlantic Coast for export.

This puts them and their government backers on a collision course with communities in Ontario and Quebec that could be victims of tar-sands pipeline leaks and ruptures.

The November 17 conference highlighted the role of First Nations both as victims of the tar sands threat and as leaders in resisting it.

In the plenary session, Vanessa Gray, a youth organizer from Aamjiwnaang First Nation, spoke of the dilemma of youth in her community. Aamjiwnaang residents’ health is severely undermined by pollution from oil refineries in nearby Sarnia, a present destination of tar sands bitumen. Indigenous young people “are starting from a hopeless place … frustrated and scared,” Gray said. “They are willing to fight for a better future but can’t do this on their own. They need support and help and encouragement.”

Aaron Detlor of the Haudenosaunee (Six Nations) Development Institute also launched a challenge to the audience, relating to Enbridge’s Line 9. “We don’t see how movement of tar sands products helps develop sustainable communities,” he said. “Enbridge says they don’t need to talk to us. We are sceptical about a court process. We have our own process… The next step is a cease and desist order from the chiefs.”

The meaning of such an order was spelled out by Haudenosaunee land defender Wes Elliott, using the example of a recent dispute with a giant corporation, Samsung. “We issued a cease and desist order…. They refused to discuss with us,” he said. “That night, word went out to our allies. With ten hours notice we had at least a hundred people [on the disputed site], some of whom are in this room. Samsung then negotiated with our Confederacy.”

Following the incident, the chiefs made an unprecedented declaration thanking the allies. “Things can be done when you have allies,” Elliot said.

“We are at a crossroads,” Detlor explained. Given the possibility of a cease and desist order, “we need to come up with some strategic means for developing a relationship among the different groups here today, and come up with something concrete.”

Art Sterritt, Executive Director of Coastal First Nations, described how such a strategic alliance has been forged in British Columbia. A decade ago, the ten component peoples of Coastal First Nations had united all stakeholders in their region around a plan for sustainable development, winning agreement from the B.C. government in 2001.

To make the ban effective, the First Nations had to go beyond the 20,000 members of their alliance and “win all the people in B.C.,” Sterritt said.

“We now have support of 80% to stop Northern Gateway. That is what you will need to do to stop Line 9.”

Prime Minister Stephen Harper is determined to drive the Enbridge pipeline through, regardless. “So we are getting ready legally, politically, and with direct action,” Sterritt said. At a rally of 5,000 protesters in Victoria, October 22, Sterritt asked who is prepared, if Harper bulls ahead, “to lie down in front of the bulldozers. They all said, ‘We will’ – men, women, and children. And I have 10,000 personal pledges to do just that.”

The final speaker in the plenary session was Maude Barlow, chairperson of the Council of Canadians. “We must fight the expansion of the tar sands, the most terrible energy product in the world,” she said. “We have to stop the growth of the pipelines. If we can stop the arteries, we can halt growth of tar sands extraction.”

In British Columbia, “132 First Nations communities say [to Enbridge], you will not pass.” The people of eastern Canada must now build an equally effective alliance. “What we do here in the East is for the whole world,” Barlow said.

“The oil companies have more money than we can ever dream of. But we have the passion of our people, … and with the outpouring of support we are receiving from all over the continent we will confront big oil and protect our lands and our rights.”

Only two months ago, almost no one in Toronto had heard of the Line 9 threat. Energetic educational work has now alerted a wide range of progressive activists, and the pipeline controversy has begun receiving coverage in major media.

The November 17 teach-in was not geared to the discussion or adoption of specific proposals, but the unexpectedly large turn-out delivered a clear message from the grass roots: there is a strong basis to begin organizing broadened education and collective action to stop Line 9.

That is the challenge now facing climate justice activists in Toronto and southern Ontario.

“The Tar Sands Come to Ontario: No Line 9” conference was organized by an ad-hoc committee and was held in conjunction with the November 16-18 OPIRG Toronto+York Rebuilding Bridges conference. To contact the organizing committee, write boliviaclimatejustice@gmail.com or go to http://t.grupoapoyo.org.