West Coast fishermen are calling for a boycott of the world’s biggest retailer, which in one year put over $71 million into plans to privatize fisheries for the benefit of giant corporations 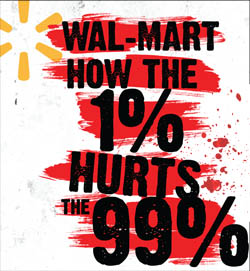 Much recent media attention has focused on Walmart’s announcement that it is canceling Thanksgiving plans for many of its employees. These workers will now have to work on the holiday as the retail giant kicks off its holiday sale at 8 PM on Thanksgiving Day, rather than waiting until midnight on “Black Friday.”

“The result is troubling for advocates for workers’ rights, as Walmart has encroached repeatedly on a holiday that traditionally involves plenty of time spent with family and away from work,” according to a statement from the Corporate Action Network. “The decision to move up the start of Black Friday sales to Thursday could be an attempt to thwart the workers’ organization efforts scheduled for Black Friday.

Labor, social justice and human rights groups are supporting a nationwide boycott of Walmart on Black Friday to back the strike of Walmart workers that day.

However, less well known to the public is Walmart’s ambitious campaign of corporate greenwashing in recent years.

According to a press release from the Walmart Headquarters in Bentonville Arkansas, the foundation made grants to more than 160 organizations in the U.S. and other countries “that work to protect natural resources while strengthening the local economies that depend on them.”

The foundation directed an overwhelming majority of the grants toward its two core environmental initiatives – “Freshwater Conservation and Marine Conservation.”

“Our work is rooted in our belief that the conservation solutions that last are the ones that make economic sense,” claimed Scott Burns, director of the foundation’s Environment Focus Area. “The foundation and our grantees embrace ‘conservationomics’ – the idea that conservation efforts can and should bring economic prosperity to local communities.”

Conservation International, the top recipient with $16,208,278, is an organization noted for its top-down approach to conservation and involvement with corporate greenwashing.

However, the group’s board features controversial corporate leaders such as Rob Walton and Stewart Resnick.

Resnick has been instrumental in campaigns to build the peripheral canal to increase water exports to agribusiness and Southern California, to eviscerate Endangered Species Act protections for Central Valley Chinook salmon and Delta smelt and to eradicate striped bass in California. The Center for Investigative Reporting describes Resnick as a “Corporate Farming Billionaire and One-Man Environmental Wrecking Crew.”

Resnick is notorious for buying subsidized Delta water and then selling it back to the public for a big profit, as revealed in an article by Mike Taugher in the Contra Costa Times on May 23, 2009.

“As the West Coast’s largest estuary plunged to the brink of collapse from 2000 to 2007, state water officials pumped unprecedented amounts of water out of the Delta only to effectively buy some of it back at taxpayer expense for a failed environmental protection plan, a MediaNews investigation has found,” said Taugher.

Taugher said the “environmental water account” set up in 2000 to “improve” the Delta ecosystem spent nearly $200 million mostly to benefit water users while also creating a “cash stream for private landowners and water agencies in the Bakersfield area.”

“No one appears to have benefitted more than companies owned or controlled by Stewart Resnick, a Beverly Hills billionaire, philanthropist and major political donor whose companies, including Paramount Farms, own more than 115,000 acres in Kern County,” Taugher stated. “Resnick’s water and farm companies collected about 20 cents of every dollar spent by the program.”

Likewise, the Nature Conservancy, a group that received $3,024,539 from the Walton Family Foundation, in 2011, is also known for its strong support of the Bay Delta Conservation Plan to build the peripheral tunnels that Resnick and other corporate agribusiness interests so avidly support. A broad coalition of fishermen, Indian Tribes, environmentalists, family farmers and elected officials opposes the construction of the tunnels because they would hasten the extinction of Central Valley salmon, Delta smelt, longfin smelt and other species.

Environmental Defense Fund, with the second highest donation at $13,683,709, is known for its market-based approach to conservation and its push for “catch shares” that essentially privatize the oceans. The relationship between the group and the retail giant is so close that it operates an office in Bentonville, Arkansas, where Walmart is headquartered.

“Environmental Defense Fund released its ‘Catch Shares Design Manual: A Guide for Fishermen and Managers’ to provide a roadmap to catch share design, which is a focus of our Marine Conservation initiative,” according to the Walton Family Foundation.

A catch share, also known as an individual fishing quota, is a transferable voucher that gives individuals or businesses the ability to access a fixed percentage of the total authorized catch of a particular species.

True to form, Sam Rawlings Walton, the grandson of Wal-Mart founder Sam Walton, serves on the Board of Trustees of EDF.

Two New York Times articles in April 2012 put Walmart and the Walton family’s “dirty laundry” in the international spotlight, leading to a renewed call by the Recreational Fishing Alliance (RFA) for the public to support their boycott of Walmart.

The Times articles covered Walton family support for anti-fishing, pro-privatization efforts in North America, followed by the publication’s exposure of alleged $24 million worth of bribes in Central America to speed up the chain’s expansion into Mexico.

“The headlines prove that Walmart and the Walton Family Foundation are no friends of local communities anywhere, and their ongoing efforts to destroy coastal fishing businesses through support of arbitrary marine reserves and privatization of fish stocks nationwide should not be supported by anglers,” said RFA executive director Jim Donofrio. “We’re asking coastal fishermen who support open access, under the law, to healthy and sustainable fish stocks to send a clear message to this arrogant corporation that we’ve had enough of their greenwashing and grafting efforts.

Donofrio noted that Walmart made world headlines following a New York Times story that charges the Bentonville, Arkansas company and its leaders of squashing an internal investigation into suspected payments of over $24 million in bribes to obtain permits to build in Mexico.

The bribery scandal was exposed on the same day that the Gloucester Times of Massachusetts exposed a reporting lapse in another recent New York Times article about the relationship between Environmental Defense Fund (EDF) and Walmart partnering together for “more enlightened and sustainable operations.”

The New York Times had earlier reported that EDF “does not accept contributions from Wal-Mart or other corporations it works for.”

However, when confronted on the fact that the $1.3 billion Walton Family Foundation (started in 1987 by Wal-Mart’s founders, Sam and Helen Walton, and directed presently by the Walton family) has been underwriting EDF’s successful effort to replace the nation’s mostly small-business, owner-operated fishing industry with “a catch shares model designed to cap the number of active fishermen by trading away ownership of the resource to those with the deepest pockets,” the author of the New York Times report conceded by email that in her rush to meet deadlines, she had not considered the relationship between the Walton family and Wal-Mart, according to Donofrio.

“I didn’t think to check the EDF board for Walton family members, or Walton Family Foundation donations,” said reporter Stephanie Clifford, adding “None of the third parties I’d spoken to had mentioned that connection, which isn’t an excuse – I should have thought of it myself, but didn’t.

RFA is hoping that saltwater anglers and fishing business owners help send Walmart stocks tumbling by refusing to shop at the corporate giant any longer.

Over $36 million alone was handed over to “Marine Conservation” grantees including the Ocean Conservancy, Conservation International Foundation, Marine Stewardship Council, World Wildlife Fund and EDF. All of these organizations are notorious for their role incorporate greenwashing efforts across the globe.

The RFA pointed out that by contributing over $36 million to NGOs promoting alleged “marine protected areas” like those created under Arnold Schwarzenegger’s Marine Life Protection Act (MLPA) Initiative and catch share programs in 2010, the Waltons were contributing to the demise of sustainable recreational and commercial fisheries and the privatization of the oceans.

“People who are concerned about our environment or labor rights should all be boycotting Walmart,” said Grader. “Their polices are clearly intended to commodify our natural resources and put them under the control of large corporations.”

“The Walton Family Foundation is funding the Environmental Defense Fund, which wants to commodify water through water marketing and privatize our fish through catch shares program,” said Grader. “These are tools used by corporations to further the growing disparity between 1 percent and rest of us.”

“I’ve been boycotting Walmart for decades and it’s absolutely great that recreational and commercial fishermen are together on this,” concluded Grader.

Dan Bacher is an editor of The Fish Sniffer, described as “The #1 Newspaper in the World Dedicated Entirely to Fishermen.”