Walmart spends millions claiming to be green. It lies.

As I post this, Walmart workers from 28 stores in 12 U.S. states have walked off the job to protest company attempts to “silence and retaliate against workers for speaking out for improvements on the job.” Sign the letter letting them know you stand with them and telling Walmart that those workers have our support! 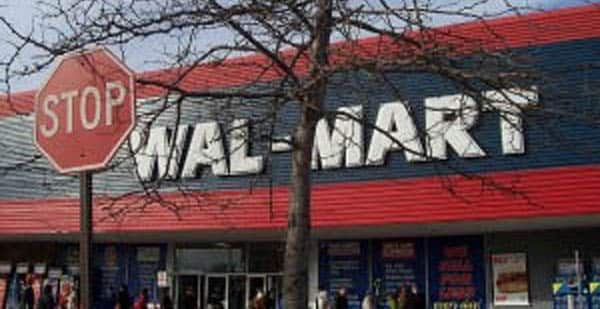 “Environmental sustainability has become an essential ingredient to doing business responsibly and successfully. As the world’s largest retailer, our actions have the potential to save our customers money and help ensure a better world for generations to come.”

In 2005, the giant retailer (biggest in the world)  announced three “aspirational [there’s a weasel word!] sustainability goals”: to use 100% renewable energy, to create zero waste, and to sell products that sustain people and the environment.

And if you believe that I’ll sell you some ocean front land in Saskatchewan.

Food & Water Watch and the Institute for Local Self-Reliance tells us:

“While Walmart’s sustainability campaign has done wonders for its public image, it has done little for the environment. In fact, Walmart’s environmental impact has only grown over the last seven years. Its business practices remain highly polluting, while its relentless expansion and consolidation of the market have come at the expense of more sustainable enterprises and systems of production and distribution.”

The two groups have published a briefing that summarizes some of the ways that Walmart  contributes to capitalism’s war against our planet: Top Ten Ways Walmart Fails on Sustainability (pdf).

For additional detail, see the nine-part series on Walmart that Stacy Mitchell of ILSR wrote for Grist.