Once again, corporate environment-killers presented a festival of greenwashing, where shopping was promoted as a painless way to save the world.

Once again, corporate environment-killers presented a festival of greenwashing, where shopping was promoted as a painless way to save the world. 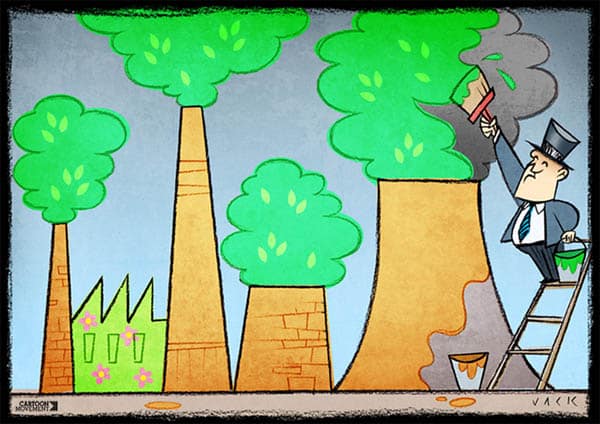 Earth Day was celebrated three days early in New York City, with a pop-up shopping mall in a park. Green-washing in all its glory: We’ll shop our way to a clean environment and a re-stabilized climate! Adding a touch of bitter irony, this corporate green-washing took place in Union Square, traditionally a site for organized protest.

Although not really expecting anything different, going only to hand out fliers against the pending Trans-Pacific and Transatlantic “free trade” agreements and the threat these agreements pose to knowing what is in the food you buy, it was nonetheless a depressing spectacle. There were large displays there for Toyota and Honda — the automobile industry can not realistically be described as “green.” Citibank was there, too, as were a collection of food companies who brand themselves as environmentally sensitive but are owned by multi-national behemoths who don’t believe you have a right to know what is in the food you eat.

The two automobile companies were hyping electric vehicles. A bit less fossil fuel exhausts adding to the atmospheres’s carbon dioxide is good, yes, but building and driving an electric-powered automobile hardly qualifies as a stroke for a cleaner world. An electric automobile still has the metal, plastic, rubber, glass and other raw materials a gas-guzzling one has. By one estimate, 56 percent of all all the pollution they will ever produce comes before the vehicle hits the road.

So increasing electricity usage, if it means an increase in coal or other global-warming and polluting sources, isn’t “green.” Then we would need to consider the battery for an electric vehicle, which is not without greenhouse-gas emissions and which contains nickel as a major input. Nickel exposure can cause damage to blood, lung, noses, kidneys, reproductive systems and skin. Mining it causes not only pollution but contributes to global warming. So, again, not really “green.”

And Citibank as a “green” enterprise? A 2011 report by a coalition of environmental groups, “Bankrolling Climate Change,” found that Citibank provided more than €4 billion in financing for coal mining in the previous five years, the third highest total of any bank in the world, and is also one of the top three financiers of mountain-top removal coal operations.

Two of the sponsors of New York City’s Earth Day fair were Morningstar Farms and Honest Tea. Both had prominent displays. But these are not mom-and-pop operations; both are part of multi-national conglomerates. Morningstar Farms is owned by Kellogg Company and Honest Tea by Coca-Cola Company. Coca-Cola contributed $1.2 million and Kellogg more than $600,000 to the corporate effort that narrowly defeated California ballot measure Proposition 37 in 2012, which would have required labels on genetically engineered foods and banned the industry practice of marketing GMO-tainted foods as “natural.”

Most natural foods brands have been swallowed by multi-national corporate behemoths, which gladly use consumers’ money for purposes anathema to organic consumers’ interests. The Cornucopia Institute notes that:

The Cornucopia Institute also reports that Morningstar Farms’ veggie burgers (along with several other brands) are produced using hexane, an air pollutant and neurotoxin. The institute writes:

“In order to meet the demands of health-conscious consumers, manufacturers of soy-based fake meat like to make their products have as little fat as possible. The cheapest way to do this is by submerging soybeans in a bath of hexane to separate the oil from the protein. Says Cornucopia Institute senior researcher Charlotte Vallaeys, ‘If a non-organic product contains a soy protein isolate, soy protein concentrate, or texturized vegetable protein, you can be pretty sure it was made using soy beans that were made with hexane.’ … Troubling, then, that the FDA does not monitor or regulate hexane residue in foods.”

At least two New York City food coops refuse to carry Morningstar Farms products. Yet there it prominently was at the Earth Day fair, with passers-by lining up to be green-washed.

And then we have Honest Tea, or more accurately, Coca-Cola, its owner. The worldwide string of human rights abuses that Coca-Cola is so frequently implicated in speaks for itself. The activist group Killer Coke has compiled a country-by-country list of outrages in various countries, including thousands of children, as young as eight-years-old, used as labor on El Salvador sugar-cane farms that supply the company; multiple kidnappings and murders of union officials at a bottling plant in Guatemala; and, in the Philippines, the use of outsourced labor to avoid paying benefits and accusations of “smuggling” sugar into the country to avoid taxes and undercut local sugar producers.

Shopping is not participation in your world

The organizers of Earth Day New York, said to be organized by an unspecified “broad coalition of environmental groups,” have this to say about it:

“Earth Day is more than a one-day event or annual environmental wake-up call. It is a catalyst for ongoing education, action, and change. It simultaneously broadens the base of support and rekindles old commitments through highly participatory strategies.”

So there we have it: Consumption of corporate products falsely branded as “green” or “environmentally friendly” is participatory! Undoubtedly, many, perhaps most, of the people passing through Union Square that day wish to be have a lighter footprint on the Earth and have would like to diminish their contribution to global warming. But to do that requires less consumption, not a re-arrangement of unsustainable consumption patterns.

Above all, it will require a complete overhaul of the world’s economy. Most of the ideas floated to deal with greenhouse-gas emissions reaching a critical point feature untested technologies, reliance on biofuels that are no less polluting than fossil-fuel energy or various other techno-fixes. The cost of all these too good to be true “solutions” to global warming will be virtually nothing, according to, for example, the Intergovernmental Panel on Climate Change report issued last year.

Alas, cost-free “green capitalism” is an illusion. The economies of the world’s advanced capitalist countries are highly dependent on consumerism; household spending accounts for 60 percent or more of gross domestic products across the global North. Wasteful practices such as planned obsolescence exist to continually induce us to buy more and more products. And nor is it simply a matter of wishing away polluting industries — capitalism has no mechanism to provide jobs for the untold millions of people who would be thrown out of work if just the most polluting industries were shut down.

Production in the capitalist system is done for private profit, not for human need; environmental costs are externalized. Thus a capitalist corporation, faced with the need to expand because of the rigors of competition and forced to focus on “maximizing shareholder value” over all other values by market forces, has to expand and dump as much of the costs of its production, including pollution and greenhouse-gas emissions, on society as possible. It also means that popular demands for “green” products are nothing more than a marketing opportunity to exploit.

Producing products that consume less energy and resources is certainly good, but if more of these are being produced, then there is no real savings. All the incentives in capitalism are for more production, more consumption.

There is no alternative to drastically reducing what is consumed and building a new economy based on human need, incentivized to protect the environment and possessing the flexibility to re-deploy labor in large numbers when industries are reduced or eliminated. This would require a socialized economy that would have no need to grow. We can’t shop or grow our way out of environmental crisis. No amount of corporate green-washing can render “green capitalism” anything other than an illusion nor can shopping replace organized activism.

Pete Dolack is an activist, writer, poet and photographer, and author of the forthcoming book It’s Not Over: Lessons from the Socialist Experiment. This essay is reposted, with permission, from his blog Systemic Disorder.