Those who oppose any use of natural resources would condemn our people to perpetual poverty. What’s needed is not a ban on development, but a democratic effort to use the country’s wealth to benefit the people and the environment

Those who oppose any use of natural resources would condemn our people to perpetual poverty. What’s needed is not a ban on development, but a democratic effort to use the country’s wealth to benefit the people and the environment 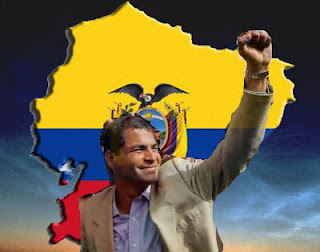 Ecuadorian president Rafael Correa counts on a high level of support at home. But internationally, he has been criticized for policies on development, the environment and indigenous peoples. Tackling these issues in an interview in the September-October issue of New Left Review, Correa raised some important issues for activists in the global North.

Asked about his attitude towards balancing resource exploitation and environmental protection, Correa said:

“We cannot lose sight of the fact that the main objective of a country such as Ecuador is to eliminate poverty. And for that we need our natural resources. There are people here who seem ready to create more poverty but leave those resources in the ground, or who even see poverty as something folkloric, as if children in the central highlands should keep dying of gastroenteritis and life expectancy should stay at 35. That is criminal.”

Criticizing what he calls the “infantile left,” Correa said:

“It is madness to say no to natural resources, which is what part of the left is proposing — no to oil, no to mining, no to gas, no to hydroelectric power, no to roads.  In the classic socialist tradition, I don’t know where Marx, Engels, Lenin, Mao, Ho Chi Minh or Castro said no to mining or natural resources. This is an absurd novelty, but it’s as if it has become a fundamental part of left discourse.

“It is all the more dangerous for coming from people who supposedly speak the same language. With so many restrictions, the left will not be able to offer any viable political projects. …

“What we need to do is exploit those resources in the right way.”

“If we exploit natural resources carefully, it can even benefit the environment, in two ways.

“Firstly, just as wealth harms the environment through energy consumption, so does poverty: I can’t tell a poor family living next to a forest not to cut down the trees. If we reduce poverty, we can conserve the environment.

“Second, there are a series of delusions: that oil destroys the jungle, for example. What does the most damage to the jungle? The expansion of the agrarian frontier. To avoid this we need to create alternative sources of employment and income.”

Such ideas will certainly be seen as controversial within environmentalist circles. But perhaps Correa’s most provocative statements were on the question of the global climate change movement.

“Some enthusiasts say that with what is happening in Latin America, [global] power relations will be changed from the South. I think this is a mistake: we’re a long way from being able to affect power relations on a global level.  It is the citizens of the North who are going to change them. This was why there was so much hope raised by the indignado movement [in Spain] and Occupy Wall Street, which were an awakening of the citizens of the First World.

“But only once those citizens have rebelled against the prevailing structures will we descend from rhetoric to actions, so that real commitments can be made to avoid climate change and preserve the only planet we have.”

Another area of controversy has been the relationship between Correa’s government and Ecuador’s main indigenous organisation, the Confederation of Indigenous Nationalities of Ecuador (CONAIE). Correa acknowledges that indigenous peoples have made a great contribution to transforming Ecuador.

“This can be seen in the new Constitution in several ways. We now define our republic as a ‘plurinational’ state, recognizing the indigenous communities as fundamental and distinct entities, endowed with distinct rights and status.

“It is also largely thanks to the indigenous communities that nature itself is recognized as a fundamental value in trust to the nation … While we insist that we need real development, we do not identify this narrowly with GDP defined in monetary terms, but instead take full account of its costs and consequences at every level, imposing the most stringent controls.”

At the same time, however, Correa said while “some indigenous communities have supported the government, others sometimes opposed it.” He said he hoped “in time such differences will be reconciled.”

Correa gave his opinion on why his government’s relationship with sections of the indigenous movement, in particular CONAIE, have been fraught with conflict. He pointed to three defining moments in this relationship. The first was during the 2006 election campaign when his party, Alianza Pais (Country Alliance), approached Pachakutik, the electoral arm of CONAIE, to run to a joint slate for president and vice-president.

“Despite this, and because we respected the indigenous movement’s trajectory, we proposed a joint Alianza Pais/Pachakutik ticket for the presidency, headed by whoever would have the best chance of winning the election, to be decided by a national survey on the question — with the other standing as Vice President.

“They refused, and some were very hostile to us because of this offer. It’s been suggested that, after their experience with Gutierrez, there was opposition in their ranks to supporting any candidate outside their own movement; that might be true, but I think the leadership was also moving farther away from its base, and it knew that working with us would mean opening up the political agenda.”

In the end, Pachakutik ran its own candidate for the 2006 presidential election, winning about 2% of the vote.

Correa said the second moment came in in 2007-08 in relation to the elected Constituent Assembly, charged with drafting a new constitution. Winning a majority of the seats in the assembly, Country Alliance made clear its support for the indigenous demand of declaring Ecuador a plurinational state.

“This did not mean, however, committing ourselves to a fragmentation of the state or an end to national unity. The idea has always been to recognize diversity and difference in order to be more integrated and cohesive as a nation, not so as to make room for any kind of territorial autonomy that weakens the national state.”

Another debate in the assembly was whether communities should have to give prior consent before any resource extraction could occur in the area. Correa argued:

“Natural resources are public goods, public property, and we cannot allow small communities, however great their historical legitimacy, to have the last word on their use.”

In the end, “prior consultation” was included in the constitution, which was approved with 63% support in a referendum. Pachakutik supported the new constitution in that poll.

The third moment came after the 2009 elections. Despite forging alliances with different indigenous groups, Country Alliance was unable to come to any agreement with CONAIE or Pachakutik.

These tensions led to a complete breakdown in dialogue.

“In the debates on the water law, the mining law and other bills, it was becoming impossible to debate with Pachakutik. Their view is fundamentalist and strongly influenced by foreign NGOs, who provide a distorted ecological discourse that fails to take into account the great needs of the Ecuadorean people …

“In the case of the water law, we were agreed on 80 per cent of the legislation, but Pachakutik clung to the idea that the state body in charge of running the country’s water supply should be composed only of community representatives … and water committees.

“What about democratic legitimacy? How can we have a public regulatory body for a sector as important for the country as water without the political presence of the government, of the national state?

“There are conceptual differences here: we are not corporativists; the indigenous leaders often seek to have institutions which they can control, but we go beyond this fragmented view of the state.

“The upshot was that Pachakutik, lining up with the right opposition in the Assembly, did not allow the water law to be approved, and today we still have the same law that was passed by the neoliberals in the 1990s  — one that doesn’t allow the state to regulate the water sector.”

Correa said this was not the only time Pachakutik sided with the right in parliament. Others include: opposing Ecuador’s entry into the Bolivarian Alliance of the Peoples of Our Americas (ALBA), an anti-imperialist bloc led by Venezuela and Cuba; not supporting the establishment of the sucre as a regional trading currency of ALBA; and abstaining on “a vote condemning the scandalous ruling recently handed down by the ICSID [World Bank dispute tribunal] that Ecuador should pay more than $2.2 billion to Occidental Petroleum”.

Correa pointed out Pachakutik even supported a coup attempt against his government in 2010.

“Finally, during the attempt to destabilize our democracy made on 30 September 2010, the indigenous leadership called on its base to mobilize against the President and his democratic and constitutional mandate. It is not easy to have a dialogue in these conditions.”

Despite these differences, Correa maintained:

“I have always treated the indigenous movement as equals — none of this infantilizing of indigenous actors or treating them as victims, as NGOs and a certain paternalist left have always done — which means that I can sometimes be tough with them, as I am with anyone else …

“The indigenous problem is an issue for Ecuador as a whole, and all public institutions should contribute to solving it, regardless of whether they are run by indigenous people or not.

“From that point of view we have made great strides towards the inclusion of the indigenous in education, universities, health, among other sectors. The largest reductions in poverty we have made have been among the indigenous. But there is still much to be done.”

[Federico Fuentes is a Sydney-based Socialist Alliance activist. He is co-author, with Michael Fox and Roger Burbach, of the forthcoming book, Latin America’s Turbulent Transitions: The Future of Twenty-First Century Socialism.]