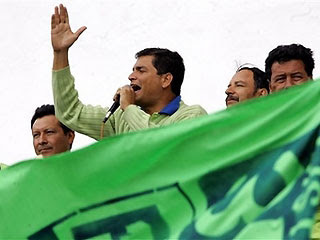 Madam, Co-Chairs, Ladies and Gentlemen:Please, allow me to express, on behalf of the people of Ecuador and of my Government, how pleased we are that this high-level Dialogue on Climate Change has been convened, and to wish success to all Members States in the conclusions they adopt at this important Meeting.The dialogue that brings us together today is a clear sign that climate change is no longer just a concern of the initiated, and has become a concern at the highest political levels. Accordingly, a commitment to offset climate change compels us to give serious thought to our current model of development.

Climate change knows no borders, but we must point out that its distribution and impact are inequitable. Whereas an average US citizen generates six tons of carbon per year and an average European citizen generates nearly 3 tons per year, the world per capita emissions average is about 1.3 tons per year, and is characterized by great asymmetry. This fact clearly demonstrates where the major responsibility lies for the impact of cabon emissions on the environment and on life on the planet.

This is not an attempt to deny the increasing emissions of some developing countries, but to demonstrate that the present model of growth, based on the intensive use of fossil fuel and over-consumption, is untenable. Its benefits reach the “privileged” minority of modern society, while enormously harming us all.

In recent years, climate disasters have cost the lives of more than 3 million people in the world, harmed 800 million other victims, and inflicted more than 23 billion dollars in immediate damage. 90% of this damage occurred in the developing countries.

Ecuador is a marginal country in terms of emissions (less of 1% of the world-wide total), but in our country the impact of climate change could cause the gradual transformation of tropical forests into savannahs, the replacement of semi-arid vegetation by barrens, significant loss of biodiversity, shrinking of glaciers and changes in rainfall patterns with potential impacts on the availability of water for human consumption.

The measures required to adapt to climate change constitute a heavy burden on the budgets of developing countries, and could reach 40 billion dollars, according to World Bank studies. We do not need loans to adapt. That would increase the burden of our external debt. What we need is compensation for damage caused by the disproportionate amount of historical and current emissions of greenhouse gases by industrialized countries. In other words, the inequality in the origin and in the distribution of the effects of the global warming can not be overlooked in this climate change debate.

Nevertheless, Ecuador is prepared to make enormous sacrifices, with a sense of justice and creativity, to counteract global warming. The initiative of the Ecuadorian Government to maintain crude oil ITT underground – a reserve that is located in a highly-sensitive ecological zone called Yasuní – entails a commitment not to exploit nearly 920 million barrels of petroleum, thereby preserving one of the most bio-diverse regions of the world. Nevertheless, this means that enormous investments will be lost, nearly 720 million dollars per year, a very significant amount for a small country with 13 million habitants and around 6 million living in poverty. We are ready to make this tremendous sacrifice, but we need the international community to share the responsibility by providing a minimum compensation in recognition of the environmental benefits we will generate for the entire planet.

The Yasuní-ITT model promoted by the Ecuadorian government will prevent the emission of around 111 million tons of carbon produced by burning oil. The opportunity cost to Ecuador for not exploiting the crude is at least 10 to 15 dollars per barrel. Nevertheless, Ecuador requests that humanity make a contribution of only 5 dollars per barrel, to preserve biodiversity, to protect the indigenous people who live in the area in voluntary isolation, and to prevent carbon dioxide emissions. The total amount we request is approximately 4.6 billion dollars. This would be an excellent example of world-wide collective action to reduce global warming and benefit the entire planet.

Our proposal includes establishment of the Yasuní-ITT Environmental Fund, to support a National Plan for Development that includes, among other things, diversification of energy sources, development of and investment in eco-tourism, and the implementation of a comprehensive program that includes health, education and environmental remediation.

In addition to technical and economic support, the Ecuadorian proposal seeks to transform old conceptions of economy and of value. In the market system the only possible value is exchange value, the price. The Yasuní-ITT project is based above all on the recognition of the value of use and service, on the non-economic value of the environmental safety and the maintenance of the planetary diversity. It aims to introduce a new economic logic for the 21st century, one in which where the production of value is rewarded, not only the production of commodities.

For the first time an oil producing country, Ecuador, where one-third of state revenues depend on the exploitation of that resource, forsakes that income for the sake of all humanity, and invites the world to join in this effort through fair compensation, so that together we can lay the foundation of a more human and fair civilization.

(Translated by Climate and Capitalism. Another translation is posted here.)