Most land grabs occur in the world’s most food-insecure countries. Profit-driven agriculture means more food for the wealthy and well-fed, and less for the poor and hungry

Most land grabs occur in the world’s most food-insecure countries. Profit-driven agriculture means more food for the wealthy and well-fed, and less for the poor and hungry. 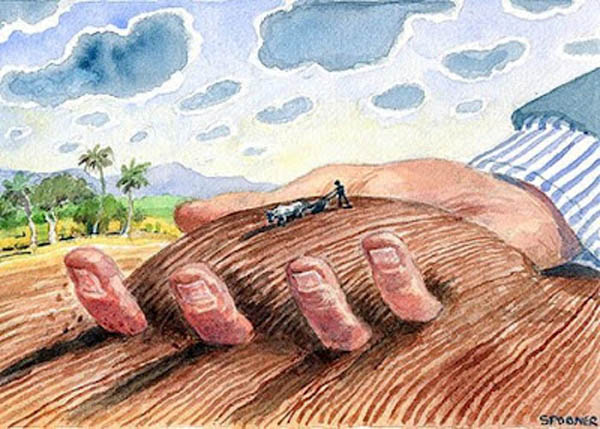 The people of the west African nation of Guinea suffer high rates of poverty and malnutrition. In some of Guinea’s regions, more than 40% of people are food insecure. Yet overseas investors have bought 100,000 hectares of land in Guinea to grow soy and corn for export and biofuel production. A further 1.5 million hectares of Guinea’s farmland will soon be up for sale.

The same trend is occurring in other hunger-prone countries. In Senegal, where food riots broke out in 2008, Swiss billionaire Jean-Claude Gandur’s ethanol company Addax Bioenergy has bought 10,000 hectares to grow sugar cane. International NGO GRAIN said local Senegalese farmers claim they were evicted from their land without compensation.

A recent global food security report said Ethiopia faced an “extreme risk” of famine and social unrest next year due to rising food prices. But Ethiopia’s government is forcing about 70,000 indigenous Anuak farmers off their land to make way for foreign food companies. More than 1 million hectares of Ethiopia’s arable land has already been sold.

In the past few years, private investors backed by global banks, financial firms, hedge funds and food giants have bought a huge amount of farmland across the global South. Critics say this “great land grab” is making the people most vulnerable to hunger even more vulnerable.

Drawing on research from the International Land Coalition, the study said:

“Of the approximately 1000 international land deals … recorded as of May 2012, 46% targeted land in Sub-Saharan Africa and 37% land in Asia. Among the 665 international land investments that report a specific crop, 55% relate to biofuel production, 19% to forestry products for wood and fiber and flowers, and the remainder (26%) to food production.”

The Global Hunger Index said these 1000 land deals have put 57 million hectares of farmland into the hands of private investors. That’s about 1.2% of the total global farmland, equal to a land mass more double the size of Victoria.

Last month, Oxfam released its Our Land, Our Lives report on land grabbing. It said foreign investors had bought enough land in the past decade to feed 1 billion people: “But the sad fact is that very few if any of these land investments benefit local people or help to fight hunger.” 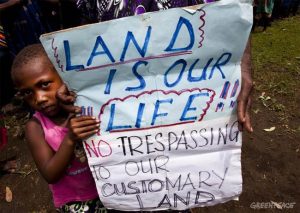 Some countries have been particularly affected. Oxfam said more than 30% of land in Liberia, in western Africa, had been sold to multinational investors. In Cambodia, up to 63% of farmland has been privatised in the hands of overseas firms. Foreign investors have also bought up huge tracts in countries such as Mozambique, Sierra Leone, Indonesia and Papua New Guinea.

As at least two-thirds of the land grabbers intend to “export everything they produce,” Oxfam said these business plans “will come into direct conflict with the need for more land to feed a growing global population.”

Oxfam singled out the World Bank, which has boosted its finance of intensive, large-scale agriculture in the global South from $2.5 billion a year in 2008 to $9.5 billion today.

The World Bank refused Oxfam’s call to put a freeze on its loans to land grabbers, saying its investments weren’t adding to the food crisis, but helping feed the world. The bank said it was providing “major new investment in agriculture to improve the productivity of large and small farmers while protecting the environment … Now, more than ever, the world needs to increase investment in agriculture.”

Investment is needed, but Oxfam’s point was that the corporate land grabbers were not investing in growing food to feed poor, hunger-stricken communities. Most firms that take the World Bank’s money use the land to produce biofuels to feed cars, or commodities to sell on overseas markets.

Researchers Shepard Daniel and Anuradha Mittall said in a 2009 study that most of these gigantic new farms displace traditional farming communities, which worsens food insecurity:

“Not only does land grabbing mean that farmers will lose their land, but these lands will be transformed from smallholdings or communal lands into large industrial estates connected to far-off markets.”

The new wave of land grabbing is also replacing ecologically sound farming methods with industrial monocultures, which rely heavily on chemical inputs and produce huge greenhouse gas emissions. This undermines the land system poor countries need most if they are to feed themselves: a system where small-scale farmers have secure access to and control over their land.

On of the first groups to raise an alarm about the new corporate land grab was GRAIN. The NGO also disputes the standard, bogus justification offered for the land purchases, which says the investments will help feed the world’s poor.

In a 2010 article, GRAIN said because the land grab “pushes an agriculture based on large-scale monocultures, chemicals [and] fossil fuels” it is “going to make the food crisis worse … This agriculture will not feed the planet. There will be seemingly more secure food for the wealthy, and more poverty for the rest.”

“There has never been a more pressing need for a system that can ensure that food is distributed to everyone, according to need. Yet never has the world’s food supply been more tightly controlled by a small group, whose decisions are based solely on how much money they can extract for their shareholders.”