“One thing I can say right off the bat is: we’re winning…” 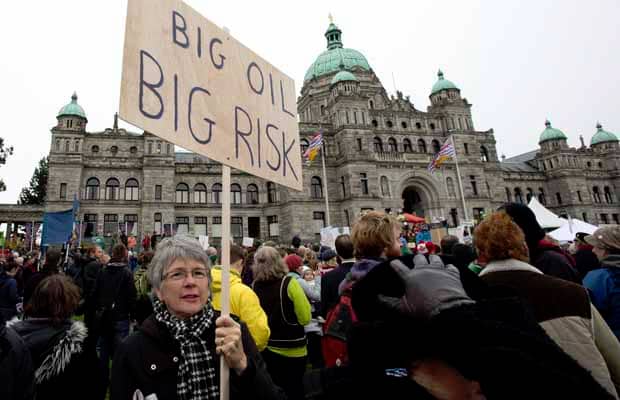 (October 22, 2012) First reports from today’s Defend Our Coast rally in from of the provincial legislature in Victoria, British Columbia …

Globe and Mail — Thousands of protesters who packed the front lawn of the British Columbia legislature yelled a thunderous “Yes” when asked if they were willing to lay down in front of pipeline bulldozers if the Northern Gateway project is approved.

After asking the question, Coastal First Nations executive director Art Sterritt told the crowd his organization has been fighting against the proposed pipeline for seven years.

“Let’s send a message to them that we have to make a difference,” he yelled. (more)

“Pipelines are the bloodlines of the tar sands,” said Maude Barlow, chair of the Council of Canadians, adding that allowing the pipelines to go ahead will guarantee an expansion of activities in the Alberta oil sands.

“Going after these pipelines is the most important fight we can have right now.” (more)

Rabble  — Thousands have gathered today in the B.C. capital, on the legislature lawn, to say a resounding ‘No’ to Enbridge and all tar sands pipelines — this protest will be followed up by distributed actions in over 60 cities and towns all across B.C. on Wednesday, October 24.

Organized under the banner of ‘Defend Our Coast,’ today’s rally — where hundreds have pledged to risk arrest with civil disobedience — has the feel of a coming out party for the mass movement that has been growing to stop the Enbridge and other pipelines.

Rueben George, Sundance Chief of the Tsleil-Waututh First Nation, capture the mood of the day: “One thing I can say right off the bat is: we’re winning…” (more)

CBC  — Several thousand people have gathered on the front lawn of the B.C. legislature today to protest the Northern Gateway Pipeline project.

The sit-in was organized by a coalition of groups that wants to send a clear message to the provincial and federal governments about the plan to pipe crude from the Alberta oilsands to a tanker port in Kitimat.

Organizer Tzeporah Berman said speakers and performers will appear throughout the day, along with a massive banner the length of an oil tanker. (more)

NEWS1130  — Thousands of people, young and old, have spent the day in the rain on the lawn of the Legislature in Victoria to protest the proposed Northern Gateway pipeline project.

Overall, things were loud but peaceful and no arrests were made. The lousy weather didn’t damped anyone’s fighting spirits.

The road has been blocked by more than 230 metres of black cloth that were carried in on sticks. The length represents how long an oil tanker is and the black shows is symbolic of death and oil.

Tom, along with 50 other people, took a bus to Victoria to voice his concerns. “It’s real actions, so I wanted to come down here and maybe our government will get the message that this is not a good idea to pursue this.” (more)

A wonderful, inspiring action. United, we can stop the petrovandals.