Diego Pacheco, head of the Bolivian delegation to CBD: “Everything connected with nature is being commodified, putting at risk the livelihoods of indigenous and local people, and of the common goods.”

“Everything connected with nature is being commodified, putting at risk the livelihoods of indigenous and local people, and of the common goods.” 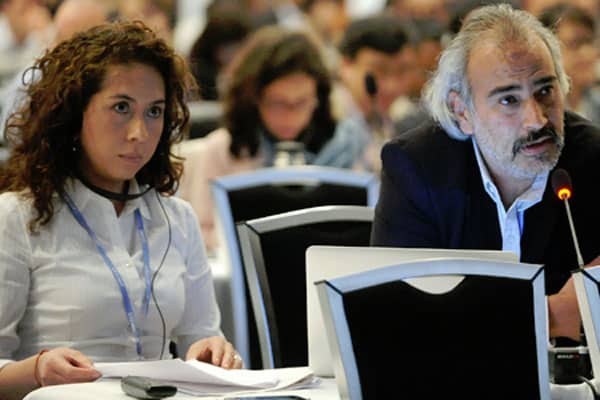 Bolivia is one of the few countries that has consistently opposed treating biodiversity as a commodity at the current Conference of Parties to the Convention on Biodiversity at Hyderabad. It has raised its voice against pro-market approaches in implementing the Strategic Plan and Aichi Targets of CBD. Even during the high-level ministerial segment, Bolivia did not leave any room for guessing while expressing its views.

Diego Pacheco, head of the Bolivian delegation, was interviewed by M. Suchitra for Down to Earth.

On many occasions, Bolivaia has expressed its apprehensions about the implementation of CBD objectives. How do you view the processes of CBD?

We are totally against mainstreaming biodiversity and ecosystems with a profit-oriented, pro-market approach. Natural resources are the treasures of the poor. We are against taking biological resources out of the hands of local communities and indigenous people and making natural resources mere commodities. We believe it is not right to move biodiversity conservation and its sustainable use into plain economic terms to achieve the objectives of the CBD.

Are you saying that CBD has lost its track?

Yes. Why should we conceal the truth? When CBD was concluded for the first time in 1992, before the Earth Summit in Rio, it was considered as something very positive for developing countries. But somewhere along the line CBD has lost its track and now its approaches for implementation of its objectives favour market forces.

Through the present mode of mainstreaming biodiversity, CBD gives leverage and power to the private sector and the market forces for utilising the natural resources only for their profits. Everything connected with nature is being commodified, putting at risk the livelihoods of indigenous and local people, and of the common goods.

What are Bolivia’s views on conservation of Biodiversity?

Bolivia has recently enacted an important legislation called Mother Earth and Integral Development for Living Well. This law is oriented to create a new paradigm in order to reach a balance between conservation of biodiversity, poverty eradication and sustainable development. The legislation recognises rights of Mother Earth, rights of indigenous people and local communities, rights of Bolivian people to their integral development for living well and rights of poor people to overcome poverty.

What exactly do you mean by rights of Mother Earth?

It’s a philosophy and approach towards nature. Bolivia does not recognise nature as a commodity. We believe earth has its own rights which we should not violate. The rights include ensuring regeneration and restoration of ecosystems, the right to life and diversity of life. We give importance to linkages between environmental, social and economic issues.

We need to explore and recognise different understandings about nature and different approaches for conserving it.

When you say Mother Earth, it considers earth as a sacred living system. Bolivia considers that the way to effectively mainstreaming biodiversity into economic and social planning processes is through the recognition of the rights of Mother Earth.

Resource mobilisation was the most contentious issue.

Most of the biodiversity-related issues and loss are the creations of the developed countries. But they conveniently ignore this fact and ask the developing countries to divert funds for biodiversity conservation.

G77 countries are trying hard to make the developed countries to stick to their commitments. How can poor countries contribute more? We are a poor country. Half of our people are poor.

And another important aspect is that there are some serious flaws in the conceptual framework of the strategy for resource mobilisation and preliminary reporting of resource mobilisation by the Parties (to CBD). The discussions focus only on public and private sector funds for the achievement of the CBD objectives and the Aichi targets.

The present mechanism totally ignores the role of the collective action or efforts by the common people. This has created vacuum in the assessment of the overall national efforts towards the conservation of biodiversity, and ignores the outstanding role of the indigenous and local populations in this endeavour.

Our stance is that the preliminary reporting framework should consider not only the valuation of how much financial resources are invested into conservation but also how much collective effort is developed in order to reach the Aichi targets.

The indicators regarding resource mobilisation should be revised to make visible the efforts of communities, indigenous people and local people. In Bolivia, the role of collective action is very prominent with respect to conservation of biological diversity. About 70 per cent of our total population are indigenous people.

How will you assess the value of the collective efforts?

We need to develop a conceptual framework and guidance regarding how to assess the role of collective action and the effort of indigenous and local populations in the conservation of the biological diversity. While doing so we need to keep in mind the critical role of local communities in the sustainable management of natural resources, and we need to fully explore the role of non-market based approaches in this endeavour.

What is your country’s stance on Nagoya Protocol? Will you be ratifying it?

If the Nagoya Protocol sets forth only an all-market approach, it would be big blow to pro-people promotion of equitable sharing and the solidarity of the local communities and indigenous people.