Counting the lies told by lying liars at News Corp.

Counting the lies told by lying liars at News Corp. 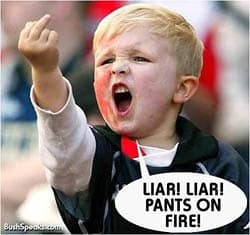 The UCS report is too polite to say this

Agnotology. The study of culturally induced ignorance or doubt, particularly the publication of inaccurate or misleading scientific data.

A new report by the Union of Concerned Scientists (pdf) examines climate science reporting by the most popular cable news channel and the largest circulation daily newspaper in the United States, both owned by Murdoch’s News Corp.

It concludes that 93% of Fox News reports on climate science, and 81% of those in the Wall Street Journal, were misleading and “attempted to broadly undermine the major conclusions of climate science.”

Fifteen years ago, in The Demon-Haunted World, astronomer Carl Sagan described the “dumbing down of America” —

“We’ve arranged a global civilization in which most crucial elements —transportation, communications, and all other industries; agriculture, medicine, education, entertainment, protecting the environment; and even the key democratic institution of voting—profoundly depend on science and technology.

“We have also arranged things so that almost no one understands science and technology. This is a prescription for disaster. We might get away with it for a while, but sooner or later this combustible mixture of ignorance and power is going to blow up in our faces.”

What Sagan didn’t say was that the dumbing down is deliberate, a conscious effort to protect the wealthy by promoting ignorance, even within the ruling class.

“In a time of universal deceit – telling the truth is a revolutionary act.”—George Orwell