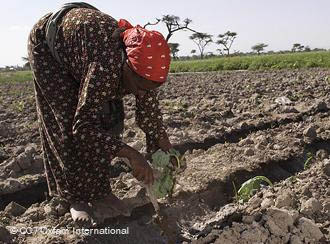 Food prices in a changing climate

Increased hunger is likely to be one of climate change’s most savage impacts on humanity. Greenhouse gas emissions are driving temperature increases, shifting rainfall patterns, and making extreme weather events more likely – like the 2012 drought in the US Midwest – with devastating consequences for agricultural production. Against a backdrop of rising populations and changing diets which will see global food production struggle to keep pace with increasing demand, the food security outlook in a future of unchecked climate change is bleak.

The impact of climate change on food production can already be seen, and will worsen as climate change gathers pace. First, slow-onset changes in mean temperatures and precipitation patterns are putting downward pressure on average global yields. Added to this are crop losses resulting from more frequent and intense extreme weather events.

Research to date has focused almost exclusively on the first impact, modelling the extent of long-run average price rises in the absence of price volatility caused by extreme weather. This tells only half the story, but the assessments are nevertheless alarming. Oxfam-commissioned research suggests that the average price of staple foods such as maize could more than double in the next 20 years compared with 2010 trend prices – with up to half of the increase due to changes in average temperatures and rainfall patterns.

As 2012’s US drought, the most severe in over half a century shows, weather-related shocks, especially in major crop exporting countries, can drive up prices precipitously in the short term. They can also trigger responses among producer and consumer countries, such as an export ban in the case of the Russian drought in 2010, which escalate prices further. The strain that price spikes have put on the global food system in recent years has aggravated political instability and social strife in many parts of the world.

Such weather and food price extremes could become the new ‘normal’. More research is needed to ‘stress-test’ the global food system: to identify its vulnerabilities and the policy options to increase resilience in a warming world, particularly for the world’s poorest consumers and food producers. The research presented in this paper is a first step.

Food price spikes are a matter of life and death to many people in developing countries, who spend as much as 75 per cent of their income on food. The FAO estimates that the 2007/08 food price spike contributed to an eight per cent rise in the number of undernourished people in Africa. Price rises in the second half of 2010 caused further turmoil, contributing to an increase in the estimated number of hungry people globally to 925 million.

For vulnerable people, sudden and extreme price hikes can be more devastating than gradual long-term rises to which they may have more chance of adjusting. Though the price spike and coping strategies may be short term, the impacts are often felt across generations. An increase in malnutrition can cause stunting and reduce developmental potential in young children. Research by Oxfam on the effects of the 2011 food price crisis documents the coping strategies of people forced to change their diets, sell productive assets, incur debt, withdraw children from school, marry early and to migrate to areas where food might be available.

Price volatility also hits small-scale food producers. Poor farmers may struggle to take advantage of rapid price increases, as they lack the access to credit, land or other inputs they need to expand production. In addition, many small farms are in fact net food consumers, meaning that when prices increase, they are worse off. Finally, volatility makes it hard for poor farmers to invest: because they do not have access to hedging instruments, they are unable to bear the risk of a future collapse in prices.

Successive droughts in the Sahel and the Horn of Africa expose the hardship of cumulative shocks, which erode resilience and peoples’ capacity to recover from one crisis to the next. Niger is today experiencing a food crisis affecting more than five million people, less than two years since the last crisis in 2010, and within the same decade as the 2005 crisis. For developing countries, a future of more frequent and intense extreme weather, reducing food availability and raising prices, means a downward spiral of worsening food insecurity and deepening poverty.