The answer to the question “Can capitalism solve global warming?” is “Yes, but you really won’t like the solution!”

Five years ago, on the second anniversary of Hurrican Katrina, I wrote the following, under the headline How capitalism ‘solves’ a climate crisis —

There have been many debates, on this blog and elsewhere, about whether global warming can be “solved” in a capitalist framework. Many people have proposed plans to radically reduce greenhouse gas emissions without radical social change.

The advocates of such plans are sincere and well-meaning, but they miss the point. The issue is not whether capitalism can deal with global warming – after all, it is a wealthy and very flexible system. The issue is whether capitalist governments are willing to act – and, if they are, how they will deal with global warming – not in utopian essays, but in the real world.

The answer to the question “Can capitalism solve global warming?” is “Yes, but you really won’t like the solution!”

For a clear example of how capitalism actually deals with a climate-crisis, we have only to look at New Orleans, two years after Katrina. For the rich and white, the problems are being solved. They are doing just fine, thank you. The tourist areas of the Big Easy are back in business. The bureaucrats and construction companies in charge of reconstruction are getting wealthier by the minute.

And the poor and black are paying the price.

Since I wrote that, Bill Quigley and Davida Finger have published an annual statistical account  on the continuing decline in the quality of life in New Orleans and Louisiana, despite promises of aid and reconstruction by all levels of government. Below, with their permission, we publish their latest “Katrina Pain Index.”

this is happening inside the United States, in capitalism’s homeland. If this is the way that capitalism solves climate crises at its doorstep, how likely is it that the system will deliver real solutions – or even much more than token amelioration – in Africa, Asia and Latin America, where the impact of climate change will be far more devastating than the worst damage done by Katrina? [Climate & Capitalism, August 31, 2007]

21st Century Barbarism is growing in the belly of the beast. 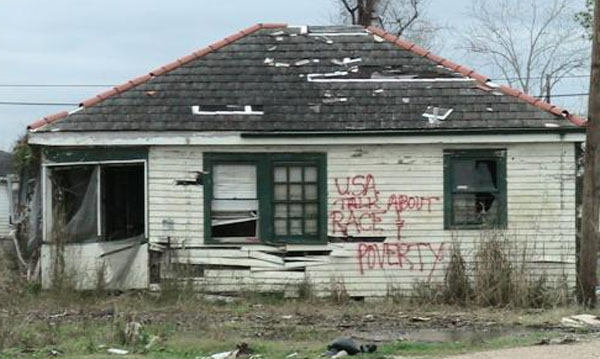 by Bill Quigley and Davida Finger

1 Rank of New Orleans in fastest growing US cities between 2010 and 2011. Source: Census Bureau.

2 Rank of New Orleans in rate of homelessness among US cities. Source: 2012 Report of National Alliance to End Homelessness.

2 Rank of New Orleans in highest income inequality for cities of over 10,000 Source: Census.

4 Days a week the New Orleans daily paper, the Times-Picayune, will start publishing and delivering the paper this fall and switch to internet only on other days. (See 44 below). Source: The Times-Picayune.

15 Number of police officer-involved shootings in New Orleans so far in 2012. In all of 2011 there were 16. Source: Independent Police Monitor.

27 Percent of people in New Orleans living in poverty. The national rate is 15%. Among African American families the rate is 30% and for white families it is 8%. Source: Corporation for Enterprise Development (CEFD) and Greater New Orleans Community Data Center (GNOCDC) Assets & Opportunity Profile: New Orleans (August 2012).

34 Bus routes in New Orleans now. There were 89 before Katrina. Source: RTA data.

40 Percent of poor adults in New Orleans region that work. One quarter of these people work full-time and still remain poor. Source: GNOCDC.

42 Percent of the children in New Orleans who live in poverty. The rate for black children is 65 percent compared to less than 1 percent for whites. Source: Census.

44 Rank of Louisiana among the 50 states in broadband internet access. New Orleans has 40 to 60 percent access. Source: The Lens.

60 Percent of New Orleans which is African American. Before Katrina the number was 67. Source: GNOCDC.

60 Percent of renters in New Orleans are paying more than 30 percent of their income on rent and utilities, up from 51 percent in 2004. Source: GNOCDC.

68 Percent of public school children in New Orleans who attend schools that pass state standards. In 2003-2004 it was 28 percent. Source: GNOCDC.

75 Percent of public school students in New Orleans who are enrolled in charter schools. Source: Wall Street Journal. This is the highest percentage in the US by far, with District of Columbia coming in second at 39 percent. Sources: Wall Street Journal and National Alliance for Public Charter Schools.

Bill Quigley is Associate Director of the Center for Constitutional Rights and a law professor at Loyola University New Orleans. He is a Katrina survivor and has been active in human rights in Haiti for years. He volunteers with the Institute for Justice and Democracy in Haiti (IJDH) and the Bureau de Avocats Internationaux (BAI) in Port au Prince. Contact Bill at quigley77@gmail.com