For eight years, Intercontinental Cry has been an indispensable source of news and analysis on indigenous struggles around the world. Their new book is an invaluable resource: I recommend it highly, and urge readers who are able to do so to contribute to IC’s fundraising appeal. 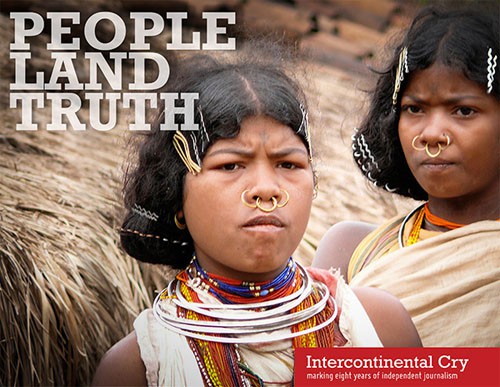 Their first major online publication, People Land Truth features more than three dozen stories, including 37 revised and updated articles from the website, exclusive reports on the situations in West Papua, Honduras and Wirikuta, and some very generous contributions from the Indigenous Environmental Network and the Sacred Land Film Project.

John Schertow, founder of IC, author and editor of People Land Truth said, “For the past eight years, IC, a volunteer-driven journal, has worked to keep the international community informed about the struggles and challenges that face all Indigenous Peoples. Most mainstream and alternative media outlets are only willing to cover one or two situations per year. That doesn’t even scratch the surface of what’s going on. We’ve documented more than 500 struggles.”

“Around the world, Indigenous Peoples are striving to secure ancestral lands, re-develop sustainable economies, preserve traditional languages, protect their bio-cultural heritage and help to introduce a climate of global political accountability, responsibility and healthy living. Meanwhile, they are collectively dealing with what I can only characterize as a full spectrum assault at the hands of governments, corporations, paramilitary groups, settler-mobs and non-governmental organizations.”

“It’s difficult keeping up with it all, but it’s something we have to do. We all need to know about these struggles, learn from them and support them in meaningful ways. Indigenous Peoples are the front-line for the defense of Mother Earth.”

“People Land Truth is all about this ever-growing movement. It’s far from a complete catalog, but it highlights some of the best articles and commentaries that we’ve published in recent months. In the spirit of sharing and solidarity, we are giving away the eBook for free,” said Schertow.

The People Land Truth eBook can be downloaded at the Intercontinental Cry website [PDF 2 Mb]. Print versions are available for a $20 donation. Donations can be made through Paypal or people can help out with a fundraiser that will be announced in the coming days.

More from the editor’s notebook…