If this book arms people with the information they need to convince more people to join the struggle to save the earth from capitalism, then it will have done its job.

If this book can arm people with the information they need to convince more people to join the struggle to save the earth from capitalism, then it will have done its job.

One of our favorite radical cartoonists, Stephanie McMillan, has announced that ‘Capitalism and Climate Change: The Science and Politics of Global Warming,’ a ebook that she illustrated and David Stein wrote, will be published next week. In the meantime, she has kindly given Climate & Capitalism permission to publish the book’s foreword. We’ll link to the book itself as soon as it is available. 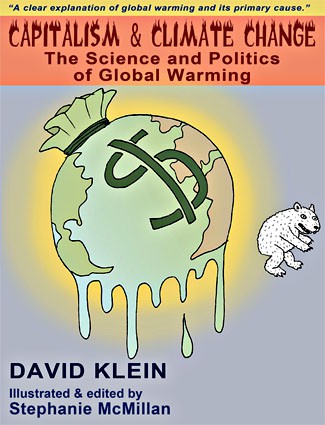 Capitalism and Climate Change:
The Science and Politics of Global Warming

2014 was the hottest year on record. If we don’t quickly find a way to stop global warming, we’re cooked. This ghastly reality is now staring us right in the face.

It’s finally become fashionable for the leftish intelligentsia—public intellectuals, paid activists, liberal editors—to bend themselves, with much concern and expressions of urgency (albeit a bit late for some), to the challenge of global warming. But most of them seem constitutionally incapable of dealing with the underlying situation that drives it. They identify the problem variously as corporate greed, sociopathic elites, brainwashed consumers, corrupt politicians. When they can no longer avoid mentioning capitalism, they unfailingly qualify it: “capitalist excess,” “corporate capitalism,” “crony capitalism,” “the broken system.”

But the culprit is capitalism, period. Qualifiers let capital off the hook, protect it as the one unassailable permanent condition that must be worked around in the quest to solve the crises that it in fact causes. That this is an exercise in futility is a tragic understatement. But as one of its staunchest defenders (Dick Cheney) famously declared, this way of life is non-negotiable.

Because these “broken system” advocates restrict their critique to symptoms and not cause, they accordingly suggest measures — technical fixes, legal restraints, political reforms, economic restructuring, shifts, upgrades, adjustments—that may slightly help in (very briefly) staving off the inevitable, but can’t possibly solve the problem. We don’t need to fix capitalism. It’s not broken; it’s doing what it does. We need to destroy it.

Capitalism is a global mode of production that is inherently, structurally, inescapably, ever-expanding. Its sole aim is constant capital accumulation. The machine must be fed; consequences are merely collateral damage. It has an inexorable motion of its own that is utterly heedless of human will, desires, or needs (never mind those of other forms of life, who are reduced to mere “resources”).

Capital dominates everything; it enchains humanity to the task of its continuance. It reproduces and accumulates through the exploitation of labor in the production of surplus value, crystallized in commodities. And thus it is voracious in its intake of raw materials (forests, wildlife, soil), burns fuel insatiably (coal, oil, natural gas), and then spits its foul wastes into the air and waters, in a cycle of production that is unrelenting. It also happens to be suffocating and cooking us.

Professor David Klein is rare in academia, in that he’s able and willing to acknowledge that capitalism and a healthy planet are totally incompatible. This is the real inconvenient truth; saying it out loud can be hard on one’s career. But he has the objectivity and integrity not to turn away from it. Instead, he has assumed the responsibility to help others understand it too, so that they can join the struggle to save the planet. The phrase “save the planet” has been co-opted into a cliché, an insult to our intelligence — a meaningless phrase employed to reduce our agency to recycling aluminum cans and lowering thermostats two degrees. But David takes saving the planet seriously, and he’s determined to figure out what needs to be done to really accomplish that, and bend his efforts accordingly.

I met David in the fall of 2013, when I was invited by Edie Pistolesi (Professor of Art) to speak at California State University, Northridge (CSUN). I arrived prepared with my speech about what capitalism is and why it’s irredeemable, with accompanying slides of comics intended to make that information less ignorable. She arranged for David to speak first. She called his talk “The Scary Speech.” “It’ll be like a one-two punch,” she explained. “He’ll tell the students what kind of big trouble we’re in, and you’ll provide the reason and point the way out.”

The combination worked so well that we presented it again a year later. This book is an expanded version of David’s “Scary Speech,” along with some analysis based on my own talk and book, Capitalism Must Die!

Edie described the reactions of some of her students to the talks: “stunned,” “scared to death.” One started crying. Many didn’t appear affected at all. But others opened up to face the challenge.

One of David’s students told me that he’s the only professor who ever told her the truth about capitalism. Now she’s made a commitment to becoming an organizer in her own right, one more precious fighter for a living world. She’ll gather others. If this book can arm them with some of the information they need to convince more people to join the struggle, then it will have done its job. Together, we’ll build a movement strong enough to forcibly escort this ecocidal system off the stage of history.

Capitalism is dynamic, resilient and adaptable – it won’t collapse on its own. Capitalists are ruthless and heavily militarized – they won’t let go of power easily. Our recognition of these sobering facts clarify our responsibilities. We need to build organizations at all levels: a broad mass movement to weaken and slow down capitalism’s destructiveness, along with revolutionary organizations working for its overthrow and for a viable alternative. The struggle against ecocide is an integral part of class struggle. It can only be won in the context of the fundamental struggle of the working class against exploitation, for emancipation, for the demise of capitalism.

Facing today’s environmental emergency may seem overwhelming and even terrifying, but we can’t let it defeat us before trying everything necessary to stop it. Nothing else we can do with our lives is more important. This is not a moment for passive resignation or paralysis of grief, but for summoning all our courage and determination for the difficult fight ahead.