The Royal Society’s People and the Planet report is rich in numbers but sadly lacking in social analysis or understanding. It doesn’t explain poverty or the environmental crisis … but it does expose the narrowness of populationist thought. 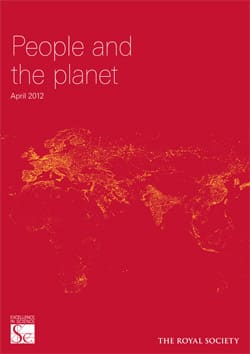 The radical ecologist Murray Bookchin once compared populationism to a phoenix, the mythical bird that periodically burns up and is reborn from its own ashes. No matter how often the “too many people” argument is refuted, it always returns, making the same claim that people are breeding too much and consuming too much, devouring the earth like a plague of locusts.[1]

The latest incarnation of the populationist phoenix is People and the Planet, a report published in April by the leading organization of Britain’s scientific establishment, the 350-year-old Royal Society. It is more carefully presented and much less hysterical than the tracts produced by population-reduction lobbyists, but the bottom line is the same: people in the South breed too much and people in the North buy too much, and unless we stop all our breeding and buying we will destroy the earth.

Simon Butler and I offered a detailed critique of populationism in Too Many People? Population, Immigration, and the Environmental Crisis, published last year by Haymarket Books. I won’t repeat our arguments here.

Instead this review discusses an issue we didn’t touch on in our book, an issue that is unintentionally illustrated by the Royal Society report: the tunnel vision that prevents mainstream demography, and many environmentalists, from seeing beyond symptoms and understanding the causes of the problems they describe.

In her history of 20th century demography, anthropologist Susan Greenhalgh calls it, “a highly mathematical field, weak on social theory.”

“As a field strongly oriented toward generating numbers under the notion that ‘if you can’t measure it, it isn’t important,’ demography resists theoretical constructs that are inherently difficult to operationalize, measure, and analyze as variables. …

“Unlike other disciplines, where critical traditions live on in Marxist, feminist, postmodernist, and other alternative periodicals, demography allowed no tradition of critical thought to develop. … Although some senior members of the field undoubtedly regretted the loss of intellectual vigor that critical perspectives provided, both their own ideology and intellectual predilections, which were liberal, as well as their field’s heavy reliance on government and foundation funding, made it difficult for them to create the political space for dissident voices to be heard.”[2]

The working group that produced the Royal Society report is overwhelmingly composed of academic demographers, and the result confirms Greenhalgh’s words. A narrow focus on numbers, combined with a refusal to consider perspectives and conclusions from analysts whose views don’t match the preconceived ideas of mainstream demography, has produced a report that is rich in numbers but sadly lacking in social analysis or understanding.

John Maynard Keynes famously wrote that “even the most practical man of affairs is usually in the thrall of the ideas of some long-dead economist.” That’s clearly true of the authors of the Royal Society report. Priding themselves on a hard-nosed commitment to empirical study and statistics, they are nevertheless disciples of long-dead Thomas Malthus, the 19th century economist who blamed the poor for poverty.

The experts they didn’t consult

The authors’ unwillingness to look beyond the narrow confines of their numbers-explain-everything discipline is displayed in their bibliography.

At first glance it’s an impressive list of sources. Eighteen pages in all. By my count, 399 separate items. Papers in academic journals. Reports from UN agencies, the World Bank and various NGOs. Newspaper articles. Previous Royal Society reports. Books published as long ago as 1899 and books that are “in press,” which means they haven’t been published yet.

But while the bibliography is large, it is limited to a very narrow range of views.

For example, it includes Paul Ehrlich’s long and highly critical 1972 review of Barry Commoner’s environmental classic The Closing Circle – but not the book itself or anything else by Commoner.

Similarly, it includes the 1972 Club of Rome report, The Limits to Growth, but not Sussex University’s 1973 response, Thinking About the Future, which argued that the Limits computer model was seriously flawed and its data inadequate.

In each of these cases, the authors have cited a work that agrees with demography’s overpopulation orthodoxy, while omitting a closely related work that questions it.

These authors listed above disagree on many issues: they include anarchists, feminists, liberals and various kinds of socialists. But they have all written extensively about environmental problems, and they all reject the claim that “overpopulation” is a primary cause of those problems, or that reducing birth rates would be an effective solution.

All of them agree that it is impossible to understand the causes and effects of population growth and individual consumption apart from the structure of social and economic relations within which people produce, reproduce and consume.

For example, Frances Moore Lappé and Rachel Schurman argue for a “power structures analysis” that:

“stresses the impact on fertility of women’s subordination to men, a condition that contributes to the social pressure for many births. But it places this problem within the context of unjust economic structures that deny people realistic alternatives to unlimited reproduction. Within such a framework, rapid population growth is seen to result largely from efforts by the poor to cope, given their powerlessness in the face of the concentrated economic strength of an elite….

“From the level of international trade and finance, down to jobs and income available to men as well as women, anti-democratic structures of decision-making set limits on people’s choices which ultimately influence their reproductive options. …

“Without such a concept, we believe it is impossible to understand the complex and interacting problems of poverty, hunger, and population, much less act effectively to address them.”[3]

“Discussions of population and food supply that leave out power relations between different groups of people will always mask the true nature of food scarcity – who gets to eat and who doesn’t – and lead to “solutions” that are simplistic, frequently oppressive and that, ultimately, reinforce the very structures creating ecological damage and hunger.”[4]

And since the Royal Society authors didn’t read Barry Commoner’s The Closing Circle, they missed his argument against reducing the discussion of environmental problems to population counts and birth control.

“Both the environmental and population crises are the largely unintended result of the exploitation of technological, economic, and political power. Their solutions must also be found in this same difficult arena. …there is a temptation to short-circuit the complex web of economic, social, and political issues and to seek direct biological solutions, particularly for the population crisis. I am persuaded that such reductionist attempts would fail.”[5]

I am not saying that reading these works would have changed the Royal Society authors’ minds, but surely it is not too much to expect that they would at least consider other views.

The facts they didn’t include

The Royal Society’s tunnel vision goes much beyond not considering other viewpoints. It also leads them to ignore facts that aren’t consistent with their only population numbers matter outlook. This can be seen most clearly in the report’s “case study” on the Republic of Niger. A realistic account of the causes of poverty in Niger would include at least some of these points:

That’s by no means a comprehensive list of the factors that make Niger the fourth poorest country in the world, but it is indicative of the profound historical, social, economic and climatic problems facing the country.

But none of that is mentioned in People and the Planet. The only cause of poverty in Niger the authors consider relevant is too many babies.

Those facts aren’t in dispute. But why are birth rates high in Niger?

Many researchers have found that large families are an economic necessity in very poor countries. Even very young children can contribute to family income, and when they grow up they provide essential support to aging parents. As Francis Moore Lappé said in the passage quoted above, rapid population growth reflects “efforts by the poor to cope, given their powerlessness in the face of the concentrated economic strength of an elite.”

There is no suggestion in People and the Planet that Niger’s large families are a rational response to poverty and powerlessness. Rather, citing surveys showing that most women in Niger want large families, the authors conclude that the country suffers from a “strongly pronatalist culture,” and call for a “massive communication effort” to change that.

The result of this narrow analysis leads to the conclusion that economic development in Niger requires “sharp reductions in fertility and population growth.” The authors don’t explain why slowing population growth might be more effective than directly confronting the devastating impacts of a century of imperialist plunder, invasions, civil wars, and climate-induced famines.

They have a hammer …

There is a French term, déformation professionnelle, which means “looking at things from the narrow perspective of one’s profession.” It’s similar to Abraham Maslow’s law of the instrument: “if the only tool you have is a hammer, it’s tempting to treat all problems as nails.”

The authors of People and the Planet did not avoid that temptation.

Demography is defined as “the study of the statistics of births, deaths, disease, etc. as illustrating the conditions of life.”[6] Statistical information is obviously important for anyone who wants to understand the state of people and our planet, and there is a great deal of very useful data in this report.

But demographic analysis is just one tool. Without the tools of history and political economy, statistics are just numbers, not explanation. In the words of Stephen J. Gould:

“Numbers suggest, constrain, and refute; they do not, by themselves, specify the content of scientific theories. Theories are built upon the interpretation of numbers, and interpreters are often trapped by their own rhetoric. They believe in their own objectivity, and fail to discern the prejudice that leads them to one interpretation among many consistent with their numbers.” [7]

That’s precisely the failing of People and the Planet. Lacking something like Lappé’s “power structures analysis” to put them in context, the Royal Society’s population statistics numbers only confuse and mislead.

Their approach leads them to blame the world’s poorest women for their own poverty, while ignoring the colonial powers, global corporations and corrupt dictatorships that have grown rich by stealing the country’s wealth.

Because they focus narrowly on the breeding habits of the 99%, the Royal Society’s authors fail to see the qualitatively more destructive effects of the one percent’s power and greed.