Book review. Richard Heinberg shows that if business as usual continues, life in a degrowth economy will be painful for everyone but the very rich, but he stops short of calling for radical system change. 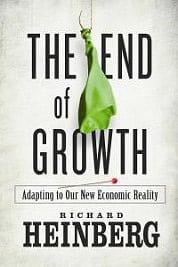 Industrialized economies have grown most years since the mid-19th century. Globally, economic output per person increased tenfold between 1900 and 2000.

Richard Heinberg says that this long run of economic growth is reaching an end owing to a number of factors: depletion of fossil fuels, minerals and fresh water; the escalating cost of industrial accidents and environmental disasters in the wake of global climate change; and financial disruptions due to the inability of our financial system to service “the enormous piles of government and private debt” generated over the past few decades.

Heinberg places particular emphasis on the depletion of essential resources, arguing that “a single factor … oil, may be playing a key role in bringing the age of expansion to a close.”

Convention clings to the view that new technologies will increase the amount of oil that can be obtained from each well drilled, and that enormous reserves of alternative hydrocarbon resources, mainly Tar Sands and shale gas and oil, will replace conventional oil, delaying peak production for decades and beyond.

Still other optimists believe that the ever adaptable market combined with human ingenuity will find other energy sources or transport options and technologies that will produce ever-improving energy efficiencies.

Heinberg rejects such optimism. Upon systematically surveying the evidence regarding substitute energy sources, he concludes that “some things don’t have substitutes or the substitutes are too expensive or don’t work well or can’t be produced fast enough.” As for improving energy efficiency, his conclusion is that “efficiency follows the law of diminishing returns: the first gains in efficiency are usually cheap but further incremental gains tends to cost more until further gains become prohibitively expensive.”

The final answer to all problems of scarcity is, of course, new technology and innovation. Heinberg takes this on too.

“Our human ability to invent genuinely new activities is probably limited and most recent inventions have consisted merely of finding ways to speed up activities that humans have been performing for a very long time — communicating, transporting themselves and their goods, trading and manufacturing. These processes can only be taken to the limits where things can be done at almost no time and at very low cost, and we are fast approaching those limits.”

Further constraining what we can expect from human ingenuity, he points out, is the fact that virtually all the important new technologies that have emerged since World War II could not have developed in the absence of massive state investment. But with governments hamstrung by overwhelming levels of debt and declining tax revenues,path-breaking technological innovations are unlikely to take place.

As regards resource depletion, his argument, convincingly presented, is that while discoveries of new sources of oil, natural gas and coal are still occurring, they are occurring in inhospitable regions such as ultra-deep water and the arctic, where operating expenses and environmental risks are extremely high. This book was written just as the shale gas and oil boom was taking off, with promises of a hundred years or more of oil and gas at cheap prices.

A new report by J. David Hughes, a colleague of Heinberg’s at the Post Carbon Institute, quickly pricked that bubble. A geologist and one of Canada’s most credible energy scientists, Hughes points out that hydraulic fracking, a high-energy technology that uses millions of gallons of water, sand and toxic chemicals to blast open methane trapped in dense rock, results in an abysmally low net energy after deducting the energy used in extracting the gas, transporting the water, and so on. Further, the economics of shale gas is very shaky. According to Hughes, a shale gas well with multiple fracks costs between $2 million and $10 million to drill. But unlike a conventional well, which declines between 25 and 40 percent in its first year of production, a shale gas well drops like lead by 63 to 85 per cent. Now, due to over-drilling and the recession-induced reduction in demand, the actual market price has sunk to below the cost of production in many areas.

With oil prices having stayed high, the same fracking technique has been used to unlock oil from hitherto inaccessible soil formations. Roaring early success led to outsized projections that shale oil could be a “game changer” with production large enough for the US to eliminate the need to import oil from offshore.

But in a recent interview Heinberg points out that shale oil can only grow to between two or three million barrels a day, about the same as the amount of oil produced from the Alberta Tar Sands, and that’s only about a tenth of current US consumption. Further, as with shale gas, Tar Sands and biofuels, the net energy from shale oil is minimal. Were oil prices to fall, shale oil could also prove to be uneconomic.

Here is Heinberg’s summary position from that same interview:

“While enormous amounts of natural gas, oil, and coal remain, the portions of those fuels that were cheapest and easiest to produce are now mostly gone, and producing remaining reserves will entail spiraling investment costs and environmental risks. Moreover, while alternative energy sources exist — including nuclear, wind, and solar — these come with their own problems and tradeoffs, and none is capable of replicating the economic benefits that fossil fuels delivered in decades past. There is no likely scenario in which the decades ahead will see energy as abundant or as cheap as it was in decades past.”

Increasing shortages and higher prices of energy, essential minerals and fresh water will choke off growth. In Heinberg’s view, this is not imminent but will happen gradually.

It could be forestalled for a time, if measures were taken now to restructure the transportation system by investing in an electrified rail system connecting every city, and rebuilding the food system by localizing production. These systems would dramatically reduce oil consumption, but they would cost hundreds of billions of dollars of public investment, even a trillion. With national economies now mired in debt and looking for ways to cut public expenditures, Heinberg correctly dismisses the likelihood of this happening.

A similar argument applies to the costs of converting to renewable sources of energy. Heinberg does not underestimate the difficulty of financing a transition towards a carbon-reduced economy without the economic surplus that a growing economy generates. He shares the degrowth movement’s viewpoint that growth produces diminishing benefits, but his own emphasis is different: he not only sees growth as unsustainable but as reaching an inevitable and imminent endpoint — even (if a bit later down the road) in China — and he foresees enormous problems as a consequence.

The arms race will heat up as states prepare for resource wars, especially in Africa, the Middle East and Latin America. Ecological disasters will claim increasing public expenditures. More resources for local police and increased surveillance will be needed to maintain domestic order as citizens revolt against lost jobs and homes, and diminishing resources are made available for education, health and other social programs.

All of this could be avoided, says Heinberg, if government policy makers were to do the right thing: namely, reform the financial system to “avert the looming wall of monetary financial collapse,” and if people would only control their addiction to ever more and ever new consumer goods. But neither is going to happen, even in the face of breakdown.

Evolution, says an author Heinberg approvingly quotes, has wired our brains so as to keep us “seeking status, novelty and engaging in conspicuous consumption.” Such an assertion is, of course, entirely debatable, but it is undoubtedly true that at least in the global North, where we are bombarded with commercial messages from the time we are born to the time we die, we are culturally wired to consume. More credible is Heinberg’s affirmation, however gingerly expressed, that “there are entrenched interests that profit from the system the way it is.”

Heinberg’s prescription in the face of this bleak scenario? As economic and environmental disaster approaches, he advises, local groups of socially conscious citizens need to organize themselves now to face the coming challenges – sharing practical skills such as food production and storage, home insulation, finding shelter for growing numbers of homeless individuals and families, bulk shopping and sharing of tools and vehicles; arranging a system of bartering of services to counter growing joblessness; creating local currencies where national currencies fail to serve the needs of producers and consumers; setting up community food centres, community gardens, free and/ or barter health clinics and legal clinics, and so on.

These are important and useful ideas and, as Heinberg points out, there are several existing community projects that have put in place at least some of these practices. (Working Centre in Waterloo, Ontario, is one of them.)

What’s glaringly absent from this list of urgent activities is political action. Avoidance of any discussion of political action is consistent with Heinberg’s presumption that a steady-state economy with zero growth and strict limits on the harvesting of renewable resources, declining use of non-renewables, limits on inequality and so forth – that all of these changes can happen within a mixed economy of free markets and state regulation.

Presumably, as this essential feature of the capitalist economy is nowhere rejected by the author, a steady-state economy would still be organized around businesses competing for markets and profit – subject to additional regulations.

Heinberg and others who write in a similar vein need to be asked whether they actually believe that businesses competing for markets (be they corporations or Heinberg’s preferred cooperatives) can prosper or even survive in a shrinking, steady-state, degrowth economy.

If the answer is “yes,” then they need to explain, in the face of hundreds of years of political economy to the contrary, how this can be so.

If the answer is “no,” are they avoiding the question and the need for mass political mobilization, perhaps in a bid to appear moderate and unthreatening so as to appeal to as large a public as possible? If this is their strategy, then it too needs full disclosure and discussion.

In spite of these shortcomings, Richard Heinberg has brought together powerful arguments and rich empirical evidence to make the case that we are nearing the end of the era of economic growth. He has also shown that if we carry on with business as usual, life in a degrowth economy will be painful for all but those at the pinnacle of society.

How long this will endure depends on how societies adapt to this reality.

Heinberg offers two contrasting paths. In the first, political leaders and policy makers continue to deny that growth has come to an end and strive to maintain the status quo whatever the cost. That is the path to disaster. In the second, a well-managed degrowth economy with relatively minor adjustments to our social structure would enable us to avoid ecological catastrophe and to enjoy a secure existence – without the frills, mind you, like a car or two in every garage.

We can learn a lot from Richard Heinberg, but we need to ask him: is this soft landing a realistic option, or is it a false option because it is simply not available? Capitalism has definitely evolved over the centuries, but to imagine a capitalism where firms compete for markets and profit in a zero growth economy is sheer fantasy. Zero-growth capitalism is an oxymoron.

The uncomfortable truth is that the real option to ecological catastrophe is ecosocialism. Of course, at the current moment ecosocialism remains as implausible politically as zero-growth capitalism is logically. But it makes more sense to work toward an option that is not mired from the get-go in theoretical contradiction.