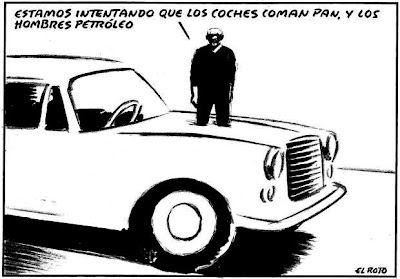 “We are trying to get cars to eat bread and people to eat oil”
Source: El Roto, El País, Madrid, 2007

No to the agrofuels craze!
GRAIN has just published a special issue of Seedling which focuses on biofuels, or as we like to call them, agrofuels – over 30,000 words of in-depth analysis from around the world.

In the process of gathering material from colleagues and social movements around the world, we have discovered that the stampede into agrofuels is causing enormous environmental and social damage, much more than we realised earlier. Precious ecosystems are being destroyed and hundreds of thousands of indigenous and peasant communities are being thrown off their land.

We believe that the prefix bio, which comes from the Greek word for ‘life’, is entirely inappropriate for such anti-life devastation. So, following the lead of non-governmental organisations and social movements in Latin America, we do not talk about biofuels and green energy. Agrofuels is a much better term, we believe, to express what is really happening: agribusiness producing fuel from plants as another commodity to in a wasteful, destructive and unjust global economy.

In a special issue of Seedling, launched today, we zoom in on the situation in different parts of the world: Latin America, Asia and Africa. We analyse what is happening and talk to the people involved. The conclusion is pretty much the same across the board: the push for agrofuels amounts to nothing less than the re-introduction and re-enforcement of the old colonial plantation economy, redesigned to function under the rules of the modern neoliberal, globalised world. Indigenous farming systems, local communities and the biodiversity they manage have to give way to provide for the increased fuel needs of the modern world.

One of the main justifications for the large-scale cultivation of agrofuels is the need to combat climate change, but the figures make a mockery of this claim. According to the US government, global energy consumption is set to increase 71 per cent from 2003 to 2030, and most of that will come from burning more oil, coal and natural gas. By the end of this period, all renewable energy (including agrofuels) will only make up 9 per cent of global energy consumption. It is a dangerous self-delusion to argue that agrofuels can play a significant role in combating global warming.

As is spelt out in this special edition, the wide-scale cultivation of agrofuels will actually make things worse in many parts of the world, notably South-east Asia and the Amazon basin where the drying of peat lands and the felling of tropical forest will release far more carbon dioxide into the atmosphere than will be saved by using agrofuels.

One of the main causes of global warming is agro-industrial farming itself, and the global food system associated with it. Although it is scarcely ever mentioned, farming is responsible for 14 per cent of greenhouse gas emissions. Within farming, the largest single cause is the use of chemical fertilisers, which introduce a huge amount of nitrogen into the soil, and nitrous oxide into the air. Changing land use (mainly deforestation and thus linked to the expansion of crop monoculture) is responsible for another 18 per cent. And a large part of global transport, which is responsible for a further 14 per cent of emissions, stems from the way in which the agro-industrial complex moves large quantities of food from one continent to anther.

It is abundantly clear that we can only halt climate change by challenging the absurdity and the waste of the globalised food system as organised by the transnational corporations. Far from contributing to the solution, biofuels will only make a bad situation worse. GRAIN believes it is time to declare unambiguously ‘No to the agrofuels craze!’

GRAIN’s special issue of Seedling with over 30,000 words of in-depth analysis from around the world, plus other resources on agrofuels are available from this page: http://www.grain.org/go/agrofuels.

SPECIAL ISSUE OF SEEDLING (JULY 2007) Download the entire Seedling issue in PDF format, or you can download individual articles below. (Note: Articles are only currently available in PDF format – we hope to have HTML versions of these articles in mid-July).

INTRODUCTORY ARTICLE An introductory article that, among other things, looks at the mind-boggling numbers that are being bandied around: the Indian government is talking of planting 14 million hectares of land with jatropha; the Inter-American Development Bank says that Brazil has 120 million hectares that could be cultivated with agrofuel crops; and an agrofuel lobby is speaking of 379 million hectares being available in 15 African countries.

CORPORATE POWER AND THE EXPANSION OF AGRIBUSINESS A detailed look at the way agrofuels is restructuring agribusiness, with the emergence of new powerful corporate alliances across the globe. Agrofuels are deepening the alliances between transnational capital and local landed elites, with profound consequences for struggles over land and local food production.

AGROFUELS IN AFRICA Foreign diplomats and businessmen are pouring in to secure reliable supply chains of agrofuels. Not only the old colonial powers but new emerging countries, particularly Brazil and China, are scouring the region for investment deals. There is talk of Southern Africa becoming ‘the Middle East of agrofuels’. A report from Uganda where popular movements have forced the government to suspend two big agrofuel projects.

AGROFUELS IN ASIA In no other region in the world is the absurdity of the frenzied rush into agrofuels more blatant than in South-east Asia, particularly in Indonesia and Malaysia. With funding under the terms of the Kyoto Protocol, peat lands are being destroyed (with the emission of billions of tonnes of carbon) to plant palms to produce oil for biodiesel. A report from Indonesia where the population is protesting over the surge in cooking oil prices because so much palm oil is being exported.

AGROFUELS IN LATIN AMERICA A mosaic of interviews with leaders of social and popular movements, who analyse what is happening on their countries and describe their strategies for confronting agrofuels. A look at the emergence of large-scale biodiesel production in Latin America (particularly in the Amazon, where soya cultivation for the production of soya oil for biodiesel is intensifying forest destruction).

FURTHER READING The volume of recent articles, papers and other materials on agrofuels can be overwhelming. We list some that we found particularly useful when preparing this Seedling.