From State of the World Population 2007, published this week by the United Nations Population Fund

Sea Level Rise: Not If but When, and How Much?

One of the alarming prospects of climate change is its impact on sea level rise and its potential consequences for coastal urban areas. Coastal zones have always concentrated people and economic activities because of their natural resources and trading opportunities. Many of the world’s largest cities are on seacoasts and at the mouths of the great rivers. Both urban and rural areas of coastal ecosystems are the most densely populated of any in the world.

These populations, especially when concentrated in large urban areas within rich ecological zones, can be a burden on coastal ecosystems, many of which are already under stress. They are increasingly at risk from seaward hazards such as sea level rise and stronger storms induced by climate change.

Sea level rise, especially if combined with extreme climatic events, would flood large parts of these areas. It would also introduce salt water into surface fresh water and aquifers, affecting cities’ water supply, and modify critical ecosystems supplying ecological services and natural resources to urban areas. It would inevitably provoke migration to other urban areas. Coastal settlements in lower-income countries would be more vulnerable and lower-income groups living on flood plains most vulnerable of all. 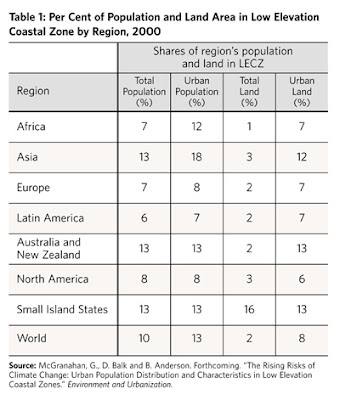 Such differences reflect the colonial heritage of Africa and Asia, where major cities grew as ports and export nodes of raw materials. Asia stands out, as it contains about three quarters of the global population in the LECZ, and two thirds of its urban population.The concentration of larger settlements in LECZ is striking. Thus, some 65 per cent of cities with more than 5 million inhabitants intersect that zone, compared to only 13 per cent of those with less than 100,000 people.Given the real and increasing threats of global environmental change in LECZ, the continuation of present patterns of urban growth is of some concern. From an environmental perspective, uncontrolled coastal development is likely to damage sensitive and important ecosystems and other resources. At the same time, coastal settlement, particularly in the lowlands, is likely to expose residents to seaward hazards that are likely to become more serious with climate change.Continuation of present urbanization patterns will draw still greater populations into the low elevation coastal zone. In particular, China’s export-driven economic growth has been associated with intensive coastal migration. Bangladesh, despite its lower rates of economic growth and urbanization, is also witnessing a marked shift in population towards the LECZ.

Protecting coastal residents from risks related to climate change would require mitigation and migration away from the lowest-elevation coastal zones. It would also demand modification of the prevailing forms of coastal settlement.

Such interventions would evidently be easier in new urban areas. Avoiding policies that favour coastal development while imposing more effective coastal zone management would be crucial. However, such measures require a vision, a commitment and a long lead time.

It is thus of considerable importance to plan ahead on the basis of good information and analysis. Unfortunately, environmental considerations have not as yet had much influence on settlement patterns. Altering these patterns would require a proactive approach that is rarely found, given the priority placed on economic growth. This, in turn, will require awareness-raising and advocacy.