Annie Proulx
FEN, BOG & SWAMP
A Short History of Peatland Destruction and Its Role in the Climate Crisis
Simon & Schuster, 2022
Pulitzer Prize winner Annie Proulx brings witness and research to the vitally important role wetlands play in preserving the environment — by storing the carbon emissions that accelerate climate change. Her wide-ranging and idiosyncratic account shows that fens, bogs, swamps, and marine estuaries are crucial to the earth’s survival, and documents their systemic destruction in pursuit of profit.

Rob Wallace
THE FAULT IN OUR SARS
Covid-19 in the Biden Era
Monthly Review Press, 2023
After half a million died from Covid during Trump’s administration, Joe Biden promised a science-driven course correction, but, a little more than a year later, another half-a-million Americans were killed by the virus. What happened? Evolutionary epidemiologist Rob Wallace catalogs the Biden administration’s failures in controlling the outbreak. He also shows that, beyond matters of specific political persona or party, it was a decades-long structural decline associated with putting profits ahead of people that gutted U.S. public health.

Alexandre Anotonelli
THE HIDDEN UNIVERSE
Adventures in Biodiversity
University of Chicago Press, 2022
As climate change, habitat loss, and other threats have placed almost one-fifth of all species on Earth at risk of extinction in the coming decades, a deeper understanding of biodiversity has never been more important. Brazilian-born scientist Alexandre Antonelli shows what’s at stake in the fight to protect and restore biodiversity, but also what can and should be done now to protect our planet and ourselves for the future.

Walter Rodney
DECOLONIAL MARXISM
Essays from the Pan-African Revolution
Verso, 2022
Walter Rodney, author of the brilliant How Europe Underdeveloped Africa, was an insightful revolutionary figure in the Pan-African and socialist movements of the 1960s and 1970s. This is a valuable collection of his essays on a wide range of subjects, but unfortunately the editors provide no information on when or where the essays were first published, making it impossible to understand how they fit into Rodney’s personal development or the history of the period.

David Michael Smith
ENDLESS HOLOCAUSTS
Mass Death in the History of the United States Empire
Monthly Review Press, 2023
The U.S. Empire has relied upon an almost unimaginable loss of life, from its inception to the present. Smith demonstrates that mass deaths, far from being unfortunate exceptions to an otherwise benign historical record, have been indispensable in the rise of the wealthiest and most powerful imperium in the history of the world. At the same time, Smith points to an extraordinary history of resistance by Indigenous peoples, people of African descent, workers, and democratic-minded people around the world.

Guglielmo Carchedi & Michael Roberts
CAPITALISM IN THE TWENTY-FIRST CENTURY
Through the Prism of Value
Pluto Press, 2023
Two noted Marxist economists show how Marx’s law of value explains numerous issues in our modern world. In both advanced economies and the periphery, value theory provides a piercing analytical framework through which we can approach topics as varied as labour, profitability, automation and AI, the environment, nature and ecology, the role of China, imperialism and the state.

Ian Angus
THE WAR AGAINST THE COMMONS
Dispossession and Resistance in the Making of Capitalism (Monthly Review Press, 2023) 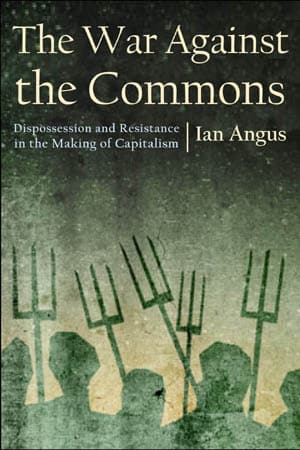 David McNally, author of Blood and Money and Monsters of the Market, writes: “I have long wanted a volume that shows how the destruction of the commons paved the way for capitalism and environmental crisis. Thanks to Ian Angus we now have that book. The War Against the Commons is a hard-hitting and highly accessible account of what ails our world and how we might fix it. Based on deep historical knowledge, Angus demonstrates that the struggle to rebuild the commons is essential to a world of justice and sustainability. This is a book for everyone who seeks to truly change the world.”