On October 11, the World Health Organization published a special report on climate change and health. The Health Argument for Climate Action is being submitted to participants in the 26th Conference of the Parties (COP26) of the United Nations Framework Convention on Climate Change, which opens in Glasgow on October 31. During COP26, WHO will hold a Global Conference on Health & Climate Change, with a special focus on climate justice and the healthy and green recovery from Covid-19.

The following is from the report’s introduction. The full report, including detailed resources and case studies for each recommendation, can be downloaded here (PDF 4.7 MB). 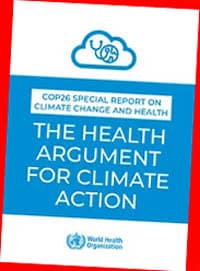 The health impacts of climate change

Climate change is the single biggest health threat facing humanity, and health professionals worldwide are already responding to the health harms caused by this unfolding crisis.

The Intergovernmental Panel on Climate Change (IPCC) has concluded that to avert catastrophic health impacts and prevent millions of climate change-related deaths, the world must limit temperature rise to 1.5°C. Past emissions have already made a certain level of global temperature rise and other changes to the climate inevitable. Global heating of even 1.5°C is not considered safe, however; every additional tenth of a degree of warming will take a serious toll on people’s lives and health.

While no one is safe from these risks, the people whose health is being harmed first and worst by the climate crisis are the people who contribute least to its causes, and who are least able to protect themselves and their families against it — people in low-income and disadvantaged countries and communities.

The climate crisis threatens to undo the last fifty years of progress in development, global health, and poverty reduction, and to further widen existing health inequalities between and within populations. It severely jeopardizes the realization of universal health coverage (UHC) in various ways – including by compounding the existing burden of disease and by exacerbating existing barriers to accessing health services, often at the times when they are most needed. Over 930 million people — around 12% of the world’s population — spend at least 10% of their household budget to pay for health care. With the poorest people largely uninsured, health shocks and stresses already currently push around 100 million people into poverty every year, with the impacts of climate change worsening this trend.

Climate change is already impacting health in a myriad of ways, including by leading to death and illness from increasingly frequent extreme weather events, such as heatwaves, storms and floods, the disruption of food systems, increases in zoonoses and food-, water- and vector-borne diseases, and mental health issues. Furthermore, climate change is undermining many of the social determinants for good health, such as livelihoods, equality and access to health care and social support structures. These climate-sensitive health risks are disproportionately felt by the most vulnerable and disadvantaged, including women, children, ethnic minorities, poor communities, migrants or displaced persons, older populations, and those with underlying health conditions.

Although it is unequivocal that climate change affects human health, it remains challenging to accurately estimate the scale and impact of many climate-sensitive health risks. However, scientific advances progressively allow us to attribute an increase in morbidity and mortality to human-induced warming, and more accurately determine the risks and scale of these health threats.

In the short- to medium-term, the health impacts of climate change will be determined mainly by the vulnerability of populations, their resilience to the current rate of climate change and the extent and pace of adaptation. In the longer-term, the effects will increasingly depend on the extent to which transformational action is taken now to reduce emissions and avoid the breaching of dangerous temperature thresholds and potential irreversible tipping points.

The health argument for climate action

Taking rapid and ambitious action to halt and reverse the climate crisis has the potential to bring many benefits, including for health. Co-benefits are defined as: the positive effects that a policy or measure aimed at one objective might have on other objectives, thereby increasing the total benefits for society or the environment.

The public health benefits resulting from ambitious mitigation efforts would far outweigh their cost. Strengthening resilience and building adaptive capacity to climate change, on the other hand, can also lead to health benefits by protecting vulnerable populations from disease outbreaks and weather-related disasters, by reducing health costs and by promoting social equity. The health co-benefits from climate change actions are well evidenced, offer strong arguments for transformative change, and can be gained across many sectors, including in energy generation, transport, food and agriculture, housing and buildings, industry, and waste management.

For example, many of the same actions that reduce greenhouse gas emissions also improve air quality, and support synergies with many of the Sustainable Development Goals (SDGs). Some measures — such as facilitating walking and cycling — improve health through increased physical activity, resulting in reductions in respiratory diseases, cardiovascular diseases, some cancers, diabetes and obesity. Another example is the promotion of urban green spaces, which facilitate climate mitigation and adaptation while also offering health co-benefits, such as reduced exposure to air pollution, local cooling effects, stress relief, and increased recreational space for social interaction and physical activity. A shift to more nutritious plant-based diets in line with WHO recommendations, as a third example, could reduce global emissions significantly, ensure a more resilient food system, and avoid up to 5.1 million diet-related deaths a year by 2050.

Research has shown that climate action aligned with Paris Agreement targets would save millions of lives due to improvements in air quality, diet and physical activity, among other benefits. However, many climate decision-making processes currently do not account for health co-benefits and their economic valuation. The 2021 WHO Health and Climate Change Global Survey of governments found that less than 1 in 5 countries have conducted an assessment of the health co-benefits of national climate mitigation policies, while a 2021 WHO review of Nationally Determined Contributions (NDCs) found just 13% of current NDCs commit to quantifying or monitoring the health co-benefits of climate policies or targets.

While there are significant health co-benefits available for various climate interventions, which can act as important ethical and economic incentives, some climate mitigation and adaptation policies may not maximise health gains or may potentially cause harm. Additionally, several challenges and barriers remain for the comprehensive inclusion of health in the cost assessment of climate policies. It is therefore critical that health and other experts are fully involved in climate decision-making processes at all levels, to ensure health and equity considerations are well understood and accounted for when developing climate policies.

Recommendations for climate change and health

The recommendations outlined in the COP26 Special Report have been developed by health professionals, organizations and stakeholders worldwide, and represent a broad consensus statement by the global health community on the actions that are needed to tackle the climate crisis, restore biodiversity, and protect health.

The recommendations were developed in consultation with over 150 organizations and over 400 experts and health professionals, through a series of consultations and workshops in all six WHO regions. They are intended to inform governments and other stakeholders ahead of the 26th Conference of the Parties (COP26) of the United Nations Framework Convention on Climate Change (UNFCCC).

COP26 is considered a crucial moment for the world’s governments to commit to collective action on limiting climate change. The conference aims to operationalize the Paris Agreement on climate change, and Parties to the agreement are expected to bring forward national climate plans reflecting their highest possible ambition.

The ten recommendations, and their respective action points, highlight the urgent need and numerous opportunities for governments to prioritise health and equity in the international climate movement and the sustainable development agenda. Each recommendation is accompanied by a selection of resources and case studies to help inspire and guide policymakers and practitioners in implementing the proposed solutions.