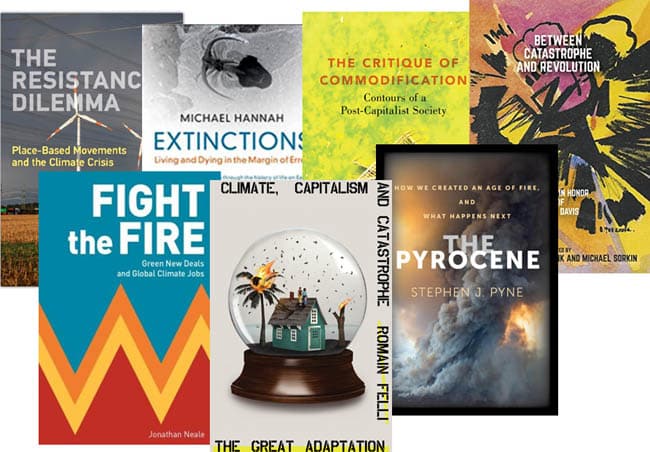 Michael Hannah
EXTINCTIONS
Living and Dying in the Margin of Error
Cambridge University Press, 2021
The fossil record reveals periods when biodiversity exploded, and short intervals when much of life was wiped out in mass extinction events. Today’s biotic crisis isn’t yet a mass extinction, but parallels with ancient mass extinction events are profound and deeply worrying. We still have some time to avert disaster, but only if we act quickly.

Romain Felli
THE GREAT ADAPTATION
Climate, Capitalism and Catastrophe
Verso, 2021
For decades, neoliberal economists and ideologues have promoted adaptation to climate change, rather than combatting its causes, by advocating market-based “solutions.” Felli shows how powerful actors are thriving in the face of dangerous climate change and even making a profit out of it.

Stephen J. Pyne
THE PYROCENE
How We Created an Age of Fire and What Happens Next
University of California Press, 2021
Ancient relationships between humans and fire broke down when people began to burn fossil biomass and humanity’s firepower became unbounded. Fire-catalyzed climate change globalized the impacts into a new geologic epoch. The Pleistocene yielded to the Pyrocene. We remade the Earth and now we must recover our responsibility as keepers of the planetary flame.

Jonathan Neale
FIGHT THE FIRE
Green New Deals and Global Climate Jobs
Resistance Books & The Ecologist, 2021
Many books discuss the politics of green new deals. This one concentrates on the nuts and bolts of the climate jobs that must be part of any solution for both the global South and North. Long-time UK-based activist Neale sets out a clear and precise prescription, working methodically from basic principles to explain exactly what drives climate change, and moves systematically to social and political questions and how to build the mass movement we need.

Daniel Bertrand Monk & Michael Sorkin, editors
BETWEEN CATASTROPHE AND REVOLUTION
Essays in Honor of Mike Davis
OR Books, 2021
For decades, Mike Davis has been the very model of an activist-scholar — a powerful chronicler, historian and analyst of catastrophe and revolution, of the complex dialectic between nature and society. The contributors to this volume build on and extend his work, refusing outdated political models and rejecting narratives of resignation.

Christoph Hermann
THE CRITIQUE OF COMMODIFICATION
Contours of a Post-Capitalist Society
Oxford University Press, 2021
Activists around the globe have challenged the commodification of water, education, health care, and other essential goods. But what is commodification, and why is it a problem? Hermann goes beyond moral criticism to advance a materialist analysis that criticizes commodification and proposes a new model for production that focuses on needs rather than profits.