It took thousands of years for wheat to evolve from a wild grass into a highly productive source of food. Can it help address global hunger in our time? 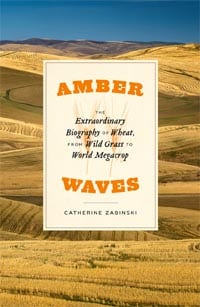 There are around 400,000 species of plants, but humanity relies on just a few for food. Three crops — wheat, rice and corn — account for most of the calories that humanity consumes. Wheat, the subject of Catherine Zabinski’s fascinating new book, has evolved from a wild grass into a finely tuned super crop which has been transformed into an incredibly productive and hardy source of food.

Amber Waves tells an evolutionary story that covers billions of years – from the first single celled organisms to the genetically complex strains of modern wheat. The length of the story requires some compression, so the first sections of the book cover millions of years and later chapters cover much shorter periods. Readers might be surprised with the space that Zabinski devotes to the first plants — single-celled green algae. Their importance lies in understanding the mechanisms of plant life its self — the conversion of sunlight into energy that a plant can use for growing.

This natural history is fascinating, if at times a little too detailed, but it places the rest of wheat’s history in a wider context. The wild grasses that were wheat’s ancestors were not an obvious choice for food for early humans. Berries or fruit from bushes and trees were an easy source of nutrition for our nomadic ancestors, but grass seeds tend to be small, hard and unappetizing. It took cultivation to make these seeds into an essential crop.

This is a not a long book, so Zabinski cannot dwell at length on the transition from nomadic to sedentary life. This is unfortunate because the history is important and often misunderstood. A common, but crude, account suggests that because larger populations can be supported with farming, agriculture developed to provide food for more people. While seemingly logical, it actually puts the outcome of a transition to agriculture as the cause. Instead, Zabinski argues “a sedentary lifestyle was not always precipitated by the advent of agriculture.” But, where people did move to permanent settlements they invariable began growing crops and raising animals.

Likely there was a period in which humans kived semi-sedentary lives., Almost certainly, even as nomadic hunter-gatherers, they understood how to cultivate food for the future. But the important point is that once humans began to domesticate wheat, the process of doing so selected for a plant that was more suited to farming. This is worth exploring as it shows precisely how there has always been a dialectical interaction between human societies and the natural world around them. As Zakinski explains:

“Generally, domesticated plants are bigger and hardier, the result of our having chosen the plant or seed that looks the best for preparing food and for planting. Other characteristics of domesticated plants are selected by chance as the result of our planting and tending. Consider, for example, that wild grasses have a brittle attachment point between the stem and the seed; when the seed is ripe, it falls to the ground…

“Humans, however, have a hard time gathering grass seeds by picking up individual grains from the ground, so the seeds most likely to be collected are the ones that are still on the plant. A single gene causes the attachment point to stay strong, so… those seeds that are easiest to harvest are collected and planted again, eventually giving rise to plants with traits that differ more and more from their wild ancestors.”

Even before people began to systematically breed better crops, early farming was already doing this. Domestication lead to increased yields, so farming communities could provide a surplus. For the first time in humanity’s long history, some people could rely on the food that others had produced, and eventually this gave rise to social stratification. This story is well known, but as Zabiniski notes, there is another factor linking class and wheat:

“Also present in European farming was the stratification of food production for the wealthy versus the working classes. If peasants couldn’t afford to use their own fields to grow grains that may not be successful, they were required to tend those same fussy wheat fields for the nobility, to provide the grains that could be ground into white flour. This flour was used to make a bread that could soak up the juices from the nobles’ meat dinners == typical fare for them, but not for the laborers.”

As humanity spread around the globe they took wheat with them from the Middle East where it was first domesticated. As they encountered new climates and soils their crops had to adapt. Each new region produced species of crops that were best adapted to the area, laying the basis for the multiple strains of wheat we see today. Technology made a difference too. The introduction of heavy ploughs that could turn heavier soils meant that wheat could grow in wider areas.

When Europeans arrived in the Americas they found, in many regions, long and established agricultural societies that produced a huge variety of food. But “European colonizers had little interest in New World approaches to farming.” Almost immediately they laid the basis for an unsustainable agriculture that would lead to soil problems and ecological crises:

“In the seemingly endless expanse, lands could be farmed until the soils were exhausted. At that point, all that needed to be done was to clear new land — as long as the colonizers had no regard for the indigenous people living there.”

Thus the evolution of wheat as a crop is inseparable from wider historical changes in human society.. Wheat’s dominant role as a key food laid the basis for wider ecological crises and provided the material basis for the rise of class society.

Wheat however is no longer simply food. It is a commodity that is both highly profitable and a weapon in the arsenal of imperialist nations — particularly the United States. The vast wheat farms of the American Midwest enabled the US to shape the world in its own interest. Zabinski points out that the “Green Revolution” was less about feeding the world and more about fighting “Red Revolution” in the Global South. Like the ruling classes of the first states the US saw the Green Revolution as a way of ensuring its own ideals dominated around the world. But the experience for many recipient countries was much more negative as home-grown agriculture was undermined.

While Zabinski discusses the supposed second Green Revolution — the use of biotechnology to increase yields — she tends to see it solely in the context of food. She focuses on the genetics and the technology at the expense of exploring the social, economic and political consequences of the science. While she acknowledges that corporations “don’t necessarily hold the best interests of humanity” at heart, her key question is whether GR 2.0 can increase food production. This is unsatisfying, because it treats questions of food and hunger as issues of agricultural science, rather than consequences of the way capitalism prioritizes profits over feeding people.

Zabinski’ shows how humans have helped transform wheat into the highly important crop it is now, but she tends to see modern biotechnology as a continuation of this process. Biotech companies’ reasons for trying to make seeds more resistant to pests are very different to the motives of a farmer 10,000 years ago trying to increase yields.

I am skeptical about genetically modified foods under the current economic system because I do not trust their safety when controlled by multinationals. However, I am also skeptical because I do not think we can solve social issues through genetics, whether bioengineering or more traditional breeding methods.

Indeed, after a detailed look at the science of crop genetics Zabinski concludes that biotechnology “has increased our capacity to obtain higher yields of some crops” but “our capacity to produce enough food over the next generations can’t depend solely on biotechnological developments.” She says we need to “think more holistically about agroecosystems” to address questions of hunger, ecological sustainability and biodiversity, and that while “we have built agricultural systems that are impressively productive” we have done so by disrupting ecological systems to the extent that they are on the point of breakdown or have already broken. I wish she had explored these ideas in more detail.

Overall, while I wish about Zabinski had focused as much on social issues as on plant genetics, Amber Waves presents a great deal of material that will help readers understand how society and nature have interacted over the ages.

Martin Empson is the author of Land & Labour: Marxism, Ecology and Human History. He blogs at Resolute Reader.