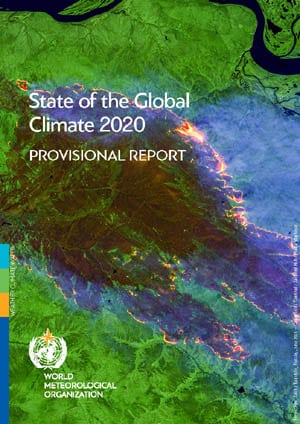 Every year since 1993, the World Meteorological Organization has issued a report on the State of the Global Climate for the previous year.

The provisional text of the report on State of the Global Climate 2020, released this week for discussion and review, shows that climate change continued its relentless march in 2020, which is on track to be one of the three warmest years on record.

Ocean heat is at record levels and more than 80% of the global ocean experienced a marine heatwave at some time in 2020, with widespread repercussions for marine ecosystems already suffering from more acidic waters due to carbon dioxide (CO2) absorption.

The report, which is based on contributions of dozens of international organizations and experts, shows how high-impact events including extreme heat, wildfires and floods, as well as the record-breaking Atlantic hurricane season, affected millions of people, compounding threats to human health and security and economic stability posed by the COVID-19 pandemic. The final 2020 report will be published in March 2021.

Global heating. Despite developing La Niña conditions, global mean temperature in 2020 is on course to be one of the three warmest on record. The past six years, including 2020, are likely to be the six warmest years on record.

Rising Seas. Sea level has increased throughout the altimeter record, but recently sea level has risen at a higher rate due partly to increased melting of ice sheets in Greenland and Antarctica. Global mean sea level in 2020 was similar to that in 2019 and both are consistent with the long-term trend. A small drop in global sea level in the latter part of 2020 is likely associated with developing La Niña conditions, similar to the temporary drops associated with previous La Niña events.

Ocean Heating. 2019 saw the highest ocean heat content on record and the rate of warming over the past decade was higher than the long-term average, indicating continued uptake of heat from the radiative imbalance caused by greenhouse gases.

Arctic Sea Ice. In the Arctic, the annual minimum sea-ice extent was the second lowest on record and record low sea-ice extents were observed in the months of July and October. Antarctic sea ice extent remained close to the long-term average.

Greenland Ice. The Greenland ice sheet continued to lose mass. Although the surface mass balance was close to the long-term average, loss of ice due to iceberg calving was at the high end of the 40-year satellite record. In total, approximately 152 Gt of ice were lost from the ice sheet between September 2019 and August 2020.

Rain and Flooding. Heavy rain and extensive flooding occurred over large parts of Africa and Asia in 2020. Heavy rain and flooding affected much of the Sahel, the Greater Horn of Africa, the India subcontinent and neighboring areas, China, Korea and Japan, and parts of southeast Asia at various times of the year.

Atlantic Hurricanes. With 30 named storms (as of 17 November) the north Atlantic hurricane season had its largest number of named storms on record with a record number making landfall in the United States of America. The last storm of the season (to date) Iota, was also the most intense, reaching category 5.

Other Tropical Storms. Tropical storm activity in other basins was near or below the long-term mean, although there were severe impacts.

Severe Drought. Severe drought affected many parts of interior South America in 2020, with the worst-affected areas being northern Argentina, Paraguay and western border areas of Brazil. Estimated agricultural losses were near US$3 billion in Brazil with additional losses in Argentina, Uruguay and Paraguay.

Climate-driven Migration. Climate and weather events have triggered significant population movements and have severely affected vulnerable people on the move, including in the Pacific region and Central America.