Lawsuit says Tyson Foods ordered sick workers to stay on the line, while bosses ran a pool on how many would contract the virus 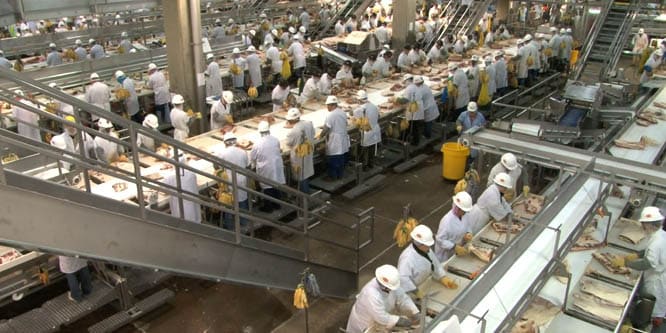 A wrongful death lawsuit tied to COVID-19 infections in a Waterloo (Iowa) pork processing plant alleges that during the initial stages the pandemic, Tyson Foods ordered employees to report for work while supervisors privately wagered money on the number of workers who would be sickened by the deadly virus.

Earlier this year, the family of the late Isidro Fernandez sued the meatpacking company, alleging Fernandez was exposed to the coronavirus at the Waterloo plant where he worked. The lawsuit alleges Tyson Foods is guilty of a “willful and wanton disregard for workplace safety.”

Fernandez, who died on April 20, was one of at least five Waterloo plant employees who died of the virus. According to the Black Hawk County Health Department, more than 1,000 workers at the plant — over a third of the facility’s workforce — contracted the virus.

The lawsuit alleges that despite the uncontrolled spread of the virus at the plant, Tyson required its employees to work long hours in cramped conditions without providing the appropriate personal protective equipment and without ensuring workplace-safety measures were followed.

The lawsuit was recently amended and includes a number of new allegations against the company and plant officials. Among them:

Tyson has yet to file a response to the new allegations, and did not respond to a call from the Iowa Capital Dispatch. In previous court filings, Tyson said it “vigorously disputes” the plaintiffs’ claims in this case, adding that it has “worked from the very beginning of the pandemic to follow federal workplace guidelines and has invested millions of dollars to provide employees with safety and risk-mitigation equipment.”

The lawsuit claims that while Tyson has repeatedly claimed that its operations needed to remain open to feed America, the company increased its exports to China by 600% during the first quarter of 2020.

The lawsuit is seeking unspecified damages for fraudulent misrepresentation and gross negligence.

The case was initially filed in state court, claiming violations of Iowa law. At Tyson’s request, the case was moved to federal court, with the company claiming it had remained open during the pandemic “at the direction of a federal officer” — President Donald Trump, who, on April 28, invoked his authority under the Defense Production Act and ordered meat and poultry processing companies to continue operating.

The nonprofit organization Public Citizen has filed an amicus brief in the case, supporting the Fernandez family’s efforts to remand the action back to state court. In its brief, Public Citizen has said that neither the Defense Production Act nor the executive order signed by President Trump had “directed” Tyson to do anything.

The Waterloo facility is Tyson’s largest pork plant in the United States. The facility employs approximately 2,800 workers who process approximately 19,500 hogs per day.