Gradual reforms can’t do the job: only profoundly radical measures can ensure human survival in an epoch of global sickening. 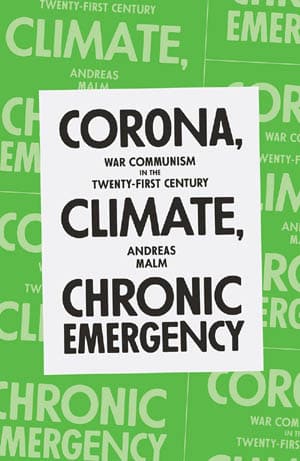 There appears to be a big difference between capitalist governments’ collective response to the Covid-19 pandemic and their response to the climate emergency. Covid has prompted rapid, draconian inroads on the functioning of many businesses and even entire industries. In country after country, large parts of the economy have been shuttered and production has been redirected to social needs, such as personal protective equipment, hand sanitizers and ventilators.

There are obvious differences between countries, but many governments appear to have made uncharacteristic decisions that put human life and welfare ahead of profit making.

In Corona, Climate, Chronic Emergency, Andreas Malm begins by asking why capitalist governments have seemingly been willing to pitch the world into recession to fight Covid, while they have been so resistant to calls to cut carbon pollution sharply. After all, Malm muses, “no champion of radical emissions cuts has ever asked people to submit to something as unpleasant as a lockdown.”

He offers several explanations for the seeming disparity. Unlike climate disruption, which is already hitting the global south first and hardest, Covid hit Western countries early on. Were Covid mainly confined to poorer countries it’s unlikely Western governments would have treated it as a global crisis. Covid also spread quickly, preventing capitalists from mounting a public relations campaign to defend their profits in the same way that the fossil fuel industry has financed climate change denial.

Another explanation for the difference is that capitalist states’ tough border restrictions and ‘war against the virus’ rhetoric fit neatly within conservative nationalist ideologies. The same cannot be said of radical action on climate change, which is internationalist by definition and requires the historically biggest polluters of the rich world to cut emissions the most.

Furthermore, while every oil or coal company, agribusiness giant and car-maker seeks to expand higher emissions is the business plan, Covid is not a direct product of the day-to-day functioning of the capitalist economy.

The state-led response to Covid is a sharp disruption to capital accumulation, but it is still a temporary measure. By contrast, climate action is forever, a serious response to climate change is a direct challenge to private property and the commodification of nature.

Malm argues that comparing the current Covid response with climate inaction is not comparing like with like. “The contrast between coronavirus vigilance and climate complacency is illusionary,” he says. Rather, “Covid-19 is one manifestation of a secular trend running parallel to the climate crises, a global sickening to match the global heating.”

For many years, scientists have warned about the threat posed by rising “zoonotic spillover” — the process by which a virus can leap to humans from another species. Their warnings of potential pandemics have been ignored.

Outbreaks of new infectious diseases have been on the rise since the 1940s, accelerating to unprecedented heights after the 1980s. Most result from zoonotic spillover. Along with Covid, which originated with bats, other modern diseases such as AIDS, Ebola, SARS, MERS and Zika also originated in animals.

Spillover is a higher risk today for several reasons. A major cause is the huge disruptions and encroachments made on natural environments, such as deforestation and urbanization. This brings wild animals in closer contact with human populations than before.

“That strange new diseases should emerge from the wild is, in a manner of speaking, logical: beyond human dominion is where unknown pathogens reside. But that realm could be left in some peace. If it weren’t for the economy operated by humans constantly assailing the wild, encroaching upon it, tearing into it, chopping it up, destroying it with a zeal bordering on lust for extermination, these things wouldn’t happen. The pathogens would not come leaping towards us. They would be secure among their natural hosts. But when those hosts are cornered, stressed, expelled and killed, they have two options: go extinct or jump.”

The relentless commodification and caging of wild animals adds to the risk of zoonotic spillover. Modern livestock and aquaculture industries, which cram thousands of animals into confined spaces, are perfect breeding grounds for pathogens that can jump to humans.

Climate change itself is also disrupting animal populations. Warmer temperatures encourage them to migrate away from the equator, further increasing the chance of new interactions between animals and humans, and hence more zoonotic spillover.

Given this, Malm concludes that the response to Covid-19 has a lot in common with how capitalist states respond to other ecological problems — treating the symptoms while ignoring the causes.

“Ears have been as deaf to the science of spillover as to that of climate, if not more so. One might regard Covid-19 as the first boomerang from the sixth mass extinction to hit humanity in the forehead.”

The likelihood of similar, or even worse, pandemics coinciding with extreme climate change amount to a single “chronic emergency.”

The final part of Malm’s book discusses the political responses and actions needed to truly address the root causes of this chronic emergency. Without decisive action we face a dangerous world of future pandemics colliding with immense ecological disasters. This means that the hope that gradual reforms will tame capitalism is less relevant than ever.

“Social democracy works on the assumption that time is on our side. But if catastrophe strikes, and if it is the status quo that produces it, then the reformist calendar is shredded.”

Malm also writes a chronic emergency obituary for anarchism, with its deep antagonism to the state. To get through the dire situation ahead and bring about the rapid changes needed, we will need state power on our side.

Nor is there any point holding on to dreams about “luxury communism” or vast material abundance under socialism. Even if we succeed in dismantling capitalism there’s no reason to think a society of lavishness and plenty will be possible on a planet impoverished by extreme climate heating and mass extinction.

Instead, the overriding priority is a project for dignified survival in a time of ominous emergency. Malm calls this project “ecological Leninism”, which he summarizes under three principles.

First, it “means turning the crises of symptoms into crises of the causes”, much like how Lenin urged the Bolsheviks to transform the outbreak of World War I into an opportunity to undermine the system that produced such horrible wars.

Second, “speed [is] a paramount virtue.” Given the state of the crisis, delay and half-measures are equal to welcoming disaster.

Third, ecological Leninism “leaps at any opportunity to wrest the state in this direction, break with business-as-usual as sharply as required and subject the regions of the economy working towards catastrophe to direct public control”.

The transition to a sustainable, ecologically sane society won’t look much like luxury communism. It will be more like “war communism” — a reference to the policies adopted by the Bolsheviks in early years of the Russian Revolution. In a time of civil war, facing near total economic collapse, a foreign blockade, and widespread famine, encircled by better armed and resourced enemies, the young worker’s state rapidly undertook widespread nationalisations of the economy. Against the odds, it survived the emergency and won the civil war.

Malm warns that his analogy is not to be taken literally. For instance, he says he no more endorses the most unsavoury aspects of War Communism than climate activists who use World War II analogies want to drop atomic weapons on Japan.

Instead, he is arguing for a planned emergency program of action, in which democratically-constituted state organizes and carries out the necessary steps to ensure human survival in a severely damaged planetary biosphere.

“Ecological war communism … means learning to live without fossil fuels in no time, breaking the resistance of dominant classes, transforming the economy for the duration, refusing to give up even if all the worst-case scenarios come true, rising out of the ruins with the force and the compromises required, organizing the transitional period of restoration, staying with the dilemma.”

Readers of Malm’s eloquent and important book need not agree that “war communism” is the best way to sum up the transitional measures needed to bring about an ecological society. I prefer plain ecosocialism myself — it carries a lot less baggage. But the great strength of Corona, Climate, Chronic Emergency is that it gets the origins and the scale of the cascading ecological crises we face exactly right. Compared with most other books that discuss the crisis, its solutions are more realistic because they are more radical.

As Malm concludes, the measures he proposes “are exactly as utopian as survival.”