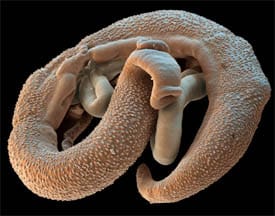 Schistosoma mansoni is one of five species of tiny waterborne worms that cause schistosomiasis.

A study published in this month’s issue of the journal Lancet Planetary Health concludes that widespread use of pesticides and other agrochemicals can speed the transmission of the debilitating disease schistosomiasis, while also upsetting the ecological balances in aquatic environments that prevent infections.

Schistosomiasis, also known as snail fever or bilharzia, is caused by parasitic worms that develop and multiply inside freshwater snails and is transmitted through contact with contaminated water. The infection, which can trigger lifelong liver and kidney damage, affects over 200 million people every year. It is second only to malaria among parasitic diseases, in terms of its global impact on human health. There is no schistosomiasis vaccine, and treatments are often ineffective.

According to the World Health Organization, schistosomiasis is prevalent in tropical and subtropical areas, especially in poor communities without access to safe drinking water and adequate sanitation. About 90% of those who require treatment live in sub-Saharan Africa. It is especially common among children who swim or play in infested water.

Women who do chores such as washing clothes in infested water can develop female genital schistosomiasis, a risk factor for HIV infection.

The new study, led by researchers at the University of California, Berkeley, found that agrochemicals can increase the transmission of schistosome worms in many ways: by directly affecting the survival of the waterborne parasite itself, by decimating aquatic predators that feed on the snails that carry the parasite and by altering the composition of algae in the water, which provides a major food source for snails.

The findings come as the connections between environment and infectious disease have been laid bare by the Covid-19 pandemic, which is caused by an emerging pathogen thought to be linked to wildlife.

Justin Remais of the UC Berkeley School of Public Health:

“Environmental pollutants can increase our exposure and susceptibility to infectious diseases. From dioxins decreasing resistance to influenza virus, to air pollutants increasing Covid-19 mortality, to arsenic impacting lower respiratory tract and enteric infections — research has shown that reducing pollution is an important way to protect populations from infectious diseases.”

The researchers found that even low concentrations of common pesticides — including atrazine, glyphosate and chlorpyrifos — can increase rates of transmission and interfere with efforts to control schistosomiasis. Agrochemical amplification of parasite transmission was not inconsequential. In the study communities in the Senegal River Basin in West Africa, the excess burden of disease attributable to agrochemical pollution was on par with disease caused by lead exposure, high sodium diets and low physical activity.

“We need to develop policies that protect public health by limiting the amplification of schistosomiasis transmission by agrochemical pollution. More than 90% of schistosomiasis cases occur in areas of sub-Saharan Africa, where agrochemical use is expanding. If we can devise ways to maintain the agricultural benefits of these chemicals, while limiting their overuse in schistosomiasis-endemic areas, we could prevent additional harm to public health within communities that already experience a high and unacceptable burden of disease.”

This article includes materials provided by University of California, Berkeley.