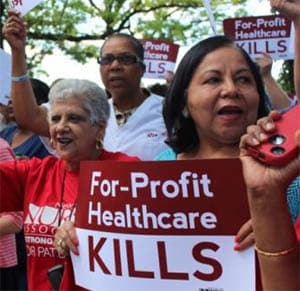 Fred Magdoff is Professor Emeritus of plant and soil science at the University of Vermont and the author of many books, including What Every Environmentalist Needs to Know about Capitalism, and Creating an Ecological Society. Farooque Chowdhury, a freelance writer based in Dhaka, Bangladesh, interviewed Magdoff for Countercurrents.

Chowdhury: Since long, you are telling about and analyzing environment and ecology, and the devastation the capitalist system is doing to these. Today, in view of this coronavirus pandemic, how do you find the situation in view of your analysis?

Magdoff: As capitalist relations permeate the world and as forests are cut down and farming expanding, there is more disturbance of ecosystems that previously had little disturbance and were relatively stable. The lessening of the zones available for wildlife to live apart from humans means that there will be more possibility for diseases to move from wildlife to humans.

The new corona virus causing Covid-19 is believed to have moved from bats, possibly through another animal, to humans. In this situation, the market for wildlife for human consumption is apparently part of the story. This is one aspect of capitalism turning everything possible into commodities, including nature.

But there is also the possibility of future diseases, especially bacterial ones, originating in factory farms where animals live in crowded and inhumane conditions and routinely fed antibiotics. This has contributed to the widespread development of strains of bacteria that are resistant to commonly used antibiotics. Drug companies try to sell as much of their antibiotics as possible (just like other drugs) — for use in humans or farm animals (or pets). Thus, the profit motive directly leads to the overuse of antibiotics and the growing problem of new antibiotic resistant strains of bacteria.

Chowdhury: In What Every Environmentalist Needs to Know about Capitalism, you and John Bellamy Foster singled out the capitalist system as the demonic hand destroying our planet’s environment and ecology, and threatening all life on this planet.

The ongoing coronavirus pandemic shows the system’s devastating role in all areas related to life including healthcare, economy, science, nature that encompasses the wild and wild life. The system denies basic primary requirements for life. Now, the people are paying the price with lives.

How do you find today’s reality – loss of so many lives, a mass murder scene spanning   continents, due to this pandemic?

Magdoff: This is an example of capitalism’s failings in many ways. One of course, especially in the United States, is the failure of the health care system itself. As the late biologist Richard Levins put it, “Health Service is a commodity, health a by-product.”

Hospitals in the U.S. have relatively few beds for patients, at less than 3 per 1000 people they are able to just handle the flow in normal times. There were inadequate stockpiles of supplies and although the national government years ago began a system to purchase thousands of low cost ventilators — now needed in large quantities to deal with this disease that attacks the respiratory system — the program was a failure. As companies involved in the early contracts were bought out by large companies in the continuing process of monopolization, larger firms lost interest in what they viewed as a low profit product.

And even to this day, the government has been incapable of developing the needed production capacity not only for ventilators but also for masks and gowns [Personal Protective Equipment] to protect healthcare workers. Literally hundreds of health care workers have gotten sick for no other reason than inadequate protective equipment. And there is no system to date for rational distribution of needed materials to the places of highest need.

The situation that we now face in the United States is caused by capitalism, mistakes made in various government agencies, and extreme incompetence at the highest levels of government, including the president. Literally months were lost in beginning to respond to the crisis, especially because of the delay in testing people to see where it was spreading and providing the ability to trace people who had come into contact with those testing positive for Covid-19.

To this day, the extent of testing for the virus is inadequate, making it harder to fight the disease. This delay in testing by itself will cause thousands, perhaps tens of thousands, of deaths. More people have become ill in the United States than any other country.

This can only happen in a country in which profit comes before health and the government is unwilling to do what was widely known to be necessary to protect the population during a pandemic.

Chowdhury: The pandemic-situation the world humanity is facing now is without any precedent. Its full implication is yet to be comprehended. Where is to start to come out of this plethora of death and disease, this system’s indifference to life?

Magdoff: It is not at all clear what society will look like after widespread deployment of an effective vaccine and medicines to treat those with disease.

The pandemic will certainly have long-term effects on people, especially those that have lost family and friends to the disease. There will undoubtedly be economic changes, with the larger and stronger companies becoming even larger and more powerful while others go bankrupt.

This is certainly a time for bold programs from the left to help the mass of the people survive and recover. The left should push programs that enhance food security for those in need and for universal health care coverage and other social programs like routine paid sick leave from work.

Once the economy begins to recover, let’s put people back to work building homes for the homeless and renovating dilapidated schools as well as for other social needs such as fixing other parts of a dilapidated infrastructure.