How pigs became commodities and key elements of the interlocked social, economic and political institutions of US capitalism.

How pigs became commodities and key elements of the interlocked social, economic and political institutions of US capitalism. 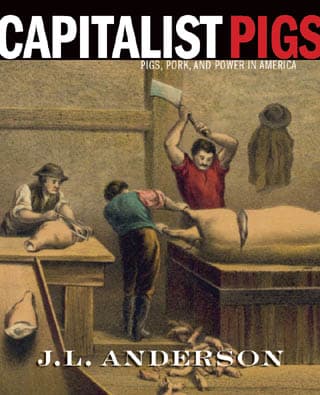 Consider the pig. You might think of it as an animal that snuffles around the farmyard and ends up as bacon. If you are more acquainted with industrial agriculture you might think of it as one of the animals that frequently spends most of its life in a small pen, with thousands of others, before ending up as bacon. But, as this fascinating account of the role of pigs in American social, economic and gastronomic life shows, there is a lot more to the hog.

J.L. Anderson argues that to understand the importance of the pig in American history you need to understand the way that capitalism has remade the environment to turn nature into commodities. It is not possible to separate pigs from the history of European colonialism in North America, the development of America’s cities and the creation of a mass working class. “Americans,” Anderson argues, “exercised power over hogs and attempted to transcend limits of production and consumption.”

The pig, a fast breeding animal that ate almost anything with very little maintenance could easily pay its own way. It was perfect for the American colonies. However, in introducing the pig, the European imperial project unleashed a new ecological force on the North American landscape. Indigenous people hated the animals, which destroyed forests, crops and ecological systems. The 1641 Pig War occurred after the killing of some animals led to a punitive raid against the Raritan people of Staten Island. This raid and counter-raids showed that Native American struggles against colonial rule were shaped by different visions of who controlled the land and how it was used.

Pigs rapidly came to play a key role in the emerging American economy. They bred fast and provided cheap food, and millions of people depended on their meat. Not for nothing was the hog was known as a “mortgage lifter” — a source of quick cash. The vast number of pigs in America meant that they were a major part of the rural economy supplying US cities.

The US Civil War badly damaged the enormous Southern hog-raising empire, and opened new vistas for pigs. Pig farming expanded into new areas — “greenfields, places where there was no buildup of pathogens and parasites in the soil and water due to generations of hog farming.”

Contemporary accounts from the 1800s showed pig farming was already exhausting the soil but that didn’t stop the intensification of pig farming. By the 1920s there were between 37 and 47 pigs per farm in some states in the US Midwest, but industrial agriculture and the decline of mixed farms soon led to increasing and more capital investment. By 1978 one-third of hogs came from farms that sold more than 1,000 a year and seven percent from farms with 5,000 or more. The decline in the number of farms combined with the massive increase in pig concentrations continued into the 2000s: in Indiana for example, forty percent of pig farms have over 5,000 head.

The intersection between the development of industrial agriculture and the changing dietary needs of the US population forms a core part of the book. This material is fascinating and shows how capitalist production, class and nature interlock to produce the diets that we eat.

But since I was reading during the Coronavirus pandemic I was particularly interested in the close association between industrial pig production, environmental damage, and disease.

As late as the 1940s, almost every US city with over 25,000 people used pigs to deal with waste. This declined rapidly after the Second World War, because scientists had found that feeding raw food to pigs promoted the spread of Hog Cholera (Swine Fever) and trichinellosis. The trichina worm was so common that 16 percent of Americans had the disease in 1940. To kill it and other diseases, rubbish had to be cooked to 212ºF, but that meant pigs were no longer a cost-effective means of rubbish disposal.

But that didn’t end pig-associated diseases. As Anderson emphasises, the development of “large scale hog operations… created the conditions for new diseases to thrive.” The growth and concentration of pig operations make diseases more deadly and more widespread. Raising large numbers of animals in close proximity allows the swift mutation of diseases makes controlling the disease and disinfecting equipment and areas harder and creates opportunities for “repeated infection of new strains.” One disease, PEDv (part of the swine enteric coronavirus virus family) infected up to 10 percent of the US pig population between 2013 and 2014. Around eight million pigs died.

“Having justifiably eliminated hog cholera at considerable expense, society must reckon with the fact that there is no end to disease risks associated with animal agriculture, especially the kind that relies on massive scale. Size has magnified the risks, despite the best efforts to keep pigs alive.”

Of course, pig farming on this scale is driven by the profits to be made from reduced costs and easier transfer, processing and distribution. The pollution and smell from such operations destroy the local environment, but that matters little to the food companies because there are vast amounts of money to be made.

Covid-19 made the leap to humans in China, but this pandemic (and future ones) could easily have originated anywhere industrial farming predominates. Key to the current outbreak was a model of agriculture perfected in the pig and cattle industry of the United States, and exported around the world.

Understanding the development of this particular model of farming means looking at the way that pigs were a key part of the emergence of capitalism in the United States. As Anderson concludes:

“American pork and lard fed enslaved people, farmers and urban workers, not to mention the industrial workers of Britain and Europe. The lard literally greased the engines of American industry and provided illumination through dark nights.”

This excellent history begins with the pig. But it shows how the animal, converted into a commodity, became part of the interlocking social, economic and political relations of US capitalism. Far from being a niche subject, this is a book that helps us unravel the great environmental crises of our times.

Martin Empson is a socialist and environmental activist in Manchester, UK. He blogs at Resolute Reader.