In the Global North it is a ‘novel threat.’ In the South, it extends the common experience of brutal assaults accompanied by waves of illness and death 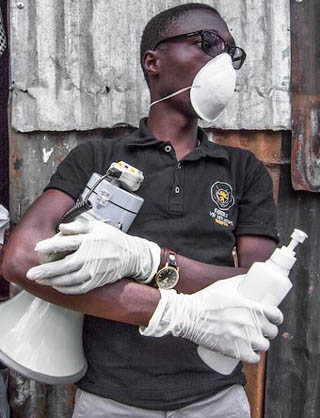 In the Global North it is a ‘novel threat.’ In the South, it extends the common experience of brutal assaults accompanied by waves of illness and death

Reposted with permission,from roape.net, the website of the review of African Political Economy. Leo Zeilig is editor of roape.net and Hannah Cross is chair of the Editorial Working Group of ROAPE.

By Leo Zeilig and Hannah Cross

The Covid-19 pandemic is one of the greatest crises of our era – though the elements of the crisis, as they are now being experienced in the Global South and North, are not entirely unusual. State and military enforced restrictions on free movement, imposed isolation, curfews, with towns and cities locked down, are not unique in our lifetime, though they might be in the richest countries in the world.

As many of our readers know from direct experience, these aspects of state power, and the imposition of that power across society, is familiar to many countries and people – not least across Africa. The biggest crisis of our lives is not felt evenly across the globe (roape.net has posted contributions from activists and researchers on the continent, on the response to Covid-19 in their countries).

Millions on the continent have experienced real food crises, collapsed health systems and the terrible, and prolonged tragedy, of early and preventable deaths (remember that infectious diseases are common in many countries of the Global South). We have seen tragedies, of gigantic human proportions, unfold in rapid-fire succession in countries in which ROAPE has a long history.

Economic crisis hastened by restructuring advocated by the World Bank and IMF, in Zimbabwe, was initially followed eagerly by the ruling ZANU-PF in the 1990s, only to lead to a mass political crisis later that decade. The regime survived the popular uprisings, but the new century saw a deepening agricultural and economic depression, that cast millions into exile, and for those who stayed in the country, a life of bare existence.

As prices fluctuated, and the economic meltdown continued, food stores were empty of staple foods, and hospitals were inundated. Millions died. Today, 5.5 million people in the countryside and 2.2 million in urban areas remain in need of urgent assistance, and acute malnutrition continues to rise.

A similar story – though on an even deeper scale – impacted the Congo. Every aspect of society was transformed beyond recognition in the late 1990s as the combined ‘crisis’ crippled institutions, broke up flimsy health services, and overturned community support networks. In the wars supported and funded by multinational mining houses – big and small – hundreds of thousands were forced from their homes, as cities, towns and communities were either destroyed or abandoned as fighting spread from the east.

In 2014, in Burkina Faso, a popular movement – an insurrection, as activists there describe it – overthrew the country’s ‘democratic’ dictator, Blaise Compaoré. Compaoré’s project of ‘restructuring’ that began with his coup against his former comrade, the radical reformer, Thomas Sankara, in 1987, was supported, once more, by international donors, and companies – French, Canadian and Chinese, for example. The country also saw devastating deforestation, and land grabs by mining companies backed by the government in Ouagadougou.

For years, the people of Burkina Faso suffered – a lamentable health care system bled by the state, severe repression against the country’s rich profusion of trade unions, protest groups and community organisations. Activists and demonstrators died in actions across decades. Others barely survived in the cities and rural areas (where water is often scarce), and food insecurity means chronic and widespread hunger. This in a country where climate change also undermines the livelihoods of 90 percent of inhabitants who rely on subsistence agriculture.

Recent years have seen flash floods and drought in Burkina Faso as elsewhere on the continent, which has destroyed crops, and have left thousands in a situation of acute undernourishment. Part of the disastrous impacts of climate change already being experienced across Africa.

Pulverized by decades of structural reform, the African continent will be affected by Covid-19 – it will likely rip through susceptible populations, particularly in urban and informal settlements, and could kill multitudes. But in populations already suffering grinding assault, typified by intermittent increases in intensity of deaths and illness, the unusualness of this wave of insult will only be fanned by a global narrative of a ‘novel threat’.

The examples, from across the continent, go on and on – the causes, long covered by ROAPE, are familiar ones: food production and the profitability of multinational corporations, land grabs, mining and the displacement of communities, class struggles and elite accumulation.

These elements of our collective analysis over years point clearly to the devastation – the ‘permanent’ crisis on the continent – and capital accumulation that lies at the heart of the Covid-19 outbreak, deadly and devastating as it is.

We want to draw attention to two aspects of the Covid-19 crisis and direct our readers and supporters to vital analysis for understanding what is happening. The first is how a marginal virus – or pathogen – was able to transit so quickly across the globe.

The causes are not simply the ‘negative’ aspects of localisation, that many commentators, left and right, are keen and able to point to. We must also see the increase in the rates of viruses as intimately connected to food production and the profit margins of international businesses. As Rob Wallace, author of Big Farms Make Big Flu has stated, ‘Anyone who aims to understand why viruses are becoming more dangerous must investigate the industrial model of agriculture and, more specifically, livestock production.’ In a word, capitalism.

ROAPE had analysed how capital is directing land grabs into major forests and smallholder land across the Global South, and Africa in particular. As Wallace has shown, such land grabbing drives both deforestation and development which leads to the spread of disease. Once ‘contained’ viruses are now trickling into livestock and human populations.

Africa has spear-headed these developments, so, in Wallace’s words, ‘Ebola, Zika, the coronaviruses, yellow fever again, a variety of avian influenzas, and African swine fever in hog are among the many pathogens making their way out of the most remote hinterlands into peri-urban loops, regional capitals, and ultimately onto the global travel network.’

Secondly, in addition to these deep, structural sponsors of ‘remote’ pathogens, into the global economy, are other profound contradictions.

The most glaring is the response of governments in the Global North –  huge bailouts, in the UK totally £330 billion (in the first week of the crisis), of mostly big business, and with landlords prioritized over renters and old-fashioned scientific quackery to defend the state’s negligence of working people. Pressure however is building in some cases, and in some countries, for a fuller response that will include salary guarantees for workers already being laid off in their thousands and safety for those still in work. As ever, any progress will depend on the pressure applied, by workers themselves within and outside the trade union structure.

Already in the past fortnight in parts of the United States, there has been a moratorium on evictions, foreclosures, and utility shutoffs and the Congress has passed emergency unemployment and paid sick leave. In other words, doing what was considered ‘too socialist’ and ‘politically impossible’ at the beginning of the outbreak.

We believe that this is a moment to build unity behind an alternative social structure to capitalism, which will continue to fail all, in Africa and the Global North, despite its ready adaptiveness. Since ROAPE was established in 1974, this remains our hope and project.