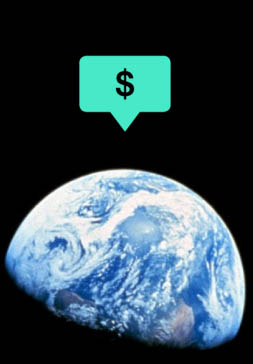 There’s a saying, usually attributed to Einstein, that we can’t solve problems by using the same kind of thinking that created them. You won’t hear that from the many liberals who insist that the only way to solve problems caused by capitalism is more capitalism.

Consider the Asian Venture Philanthropy Network (AVPN), a Singapore-based operation that “helps members maximize social impact across Asia.” According to its website, AVPN is “increasing the flow of capital into the social sector and ensuring that resources are most effectively deployed.”

By “leveraging a range of investment practices” in the global south, AVPN helps investors to “structure their portfolio for maximum impact.” They call their approach the “continuum of capital.”

As you can see, they cover their activity with thick layer of social buzz-phrases, but underneath that veneer is old-fashioned profit-seeking.

AVPN’s latest project promotes “investment opportunities in Asia that promote environmentally friendly practices.” Its Climate Action Platform — “to unlock capital in a more targeted and effective manner into climate solutions” — was launched at a workshop in Myanmar on February 26. C&C reader Gemma Dursely attended the meeting.

Despite the denialists in their ranks, capital, as much as the US military, takes climate change seriously, but on its terms and for its own purposes. The movement for concerted action on climate change is growing so rapidly and the degree of economic and social change required so radical, that co-optation of popular coalitions is vital to secure capitalist interests. There’s nothing more attractive for well-positioned capitalists than a good crisis, and climate breakdown certainly offers that.

It is time, then, for capital to crowd out social movements by fighting the good fight.

Of course, capital’s standard bearers have switched between suits and superhero costumes long before today’s charitable billionaires entered the scene. Back in 2006 The Economist christened as “philanthrocapitalism” the tendency of the new, tech-based ultra-rich — Bill Gates and today Bezos and Zuckerberg as only the most prominent and tedious examples — to “give something back.” Andrew Carnegie and John D Rockefeller did something rather similar in the early 20th century. In neither era was this plain old Christian charity: rather, these philanthropists set out, in Nicolas Guilhot’s words, “to apply the modern, rational methods of business to the administration of charitable deeds.”

Today the phenomenon reaches its apogee in venture philanthropy, where the activities of its exponents are shot through with rationalities baked into venture capital investment. Venture philanthropists understand social problems as investment opportunities, to be examined in terms of their potential risk and returns, and with close investor control — the preferred euphemism is “non-financial support” — exerted over beneficiaries, usually the ambiguous “Social Purpose Organisations.” Faith in the fruits of SPO innovation draws from the cult of the entrepreneur, whose capacity for creative destruction could demolish mere global emergencies if only it were unchained to move faster and break more things.

Between the venture philanthropists themselves, old competitive habits can be put aside in pursuit of common promotional and networking objectives. A case in point is the Asian Venture Philanthropy Network (AVPN). It includes over 600 companies, organisations, charities and foundations — some representing coveted “high net-worth individuals” — that, according to its website and in the jargon characteristic of the industry, “breaks down silos and encourages collaboration across sectors to improve the effectiveness of members in Asia.”

Like other philanthropic or impact investment networks, AVPN operates on the assumption that the most urgent problems would be perfectly manageable if only business can get involved to unleash the potential of capitalist solutions. And just like capital, it’s forever on the lookout for new market opportunities. February saw the launch of the AVPN “Climate Action Platform” in Yangon, Myanmar, with a workshop “to discuss how to unlock capital in a more targeted and effective manner into climate solutions.”

It should come as no surprise to see venture philanthropy making inroads in Myanmar. Like thousands of international investors keen to tap into Southeast Asia’s last remaining underexploited economy, they’re responding to beleaguered de facto leader Aung San Suu Kyi ‘s exhortation to “come to Myanmar, soak in an atmosphere brimming with opportunities and witness our new-found economic vibrancy with your own eyes.”

Venture philanthropists in pursuit of ‘climate change solutions’ need opportunities in the form of a problem, and they certainly chose well with Myanmar. Reliant on the southwest monsoon for its still largely agriculture-based economy, Myanmar is highly vulnerable to the effects of changing rainfall patterns, more frequent and intensifying storms, and to rising sea levels. Society and economy suffered massively under six decades of military rule, so institutional reserves to mitigate climate change impact are thin.

As the economic development mantra is exposed for the resource grab and commodification exercise it always was, the pressure is on investors to take the heat off both the system and themselves.

An ideal time, then, for AVPN to launch their Climate Action Platform with a panel discussion between industry experts, pondering the key question: “How do we move capital towards climate action?”

However insoluble this puzzle truly is, it didn’t take the panel long to crack it. In an impressive show of strategic transparency, we learned that what’s impeding benevolent corporations and foundations from halting climate change is that “it’s hard to find profitable institutions to invest in.”

Quite simply, more work needs to be done to turn biophysical processes into a credible venture philanthropic investment sector. This is where initiatives like AVPN come in, helping to create the ‘ecosystem’ in which innovation for social purpose can thrive and through which actual ecosystems and the problems that beset them can be reconceived in the image of capital.

John Patrick Leary explains this in Keywords: “as the actual ecology of the world outside becomes more imperilled, it seems to be no coincidence that the fantasy of a climate controlled indoor business ecosystem becomes ever more attractive.”

The venture philanthropic ecosystem is somewhat species-poor, but therefore simplistic enough for mechanical operation as the free market. There are the philanthropists themselves (don’t ask how they came to exist in the first place); there are victims of climate change — farmers, the poor etc (don’t ask where all this came from either); and also their representative social organisations, in the market for solutions. Innovators looking for investors, AVPN helping bring them together in a neoliberal idyll.

Staggeringly, one of the questions seriously considered in this meeting was whether there was a role for government, although possibly just as a set-up for the ritual answer: yes, to help improve the social investment ecosystem by mitigating risks to capital mobilization.

The power of ideological froth

Here we’re offered a perfect view of the dominant neoliberal understanding of the modern state as an adjunct for capital, while social and economic forces and relations of power become invisible. Looking ahead, it means that “solutions’” can never be designed so their processes and ends align with our knowledge of the land, forest, rivers and other natural habitats and ecosystems, because marginalizing exchange value in this way displaces capital.

So much for limitless innovation — creative destruction is just capital’s creative reinforcement.

With the rules of the ecosystem game written by capital, measures to combat climate change must be in a suitably commodified form to merit serious attention. True, Myanmar farmers were already adapting to climate change and could draw on many centuries of accumulated local environmental knowledge, but the crucial issue for AVPN is whether capital can leverage such innovation at scale.

How can we de-risk support for resilient solutions that add value? What incentives can be sourced from the digital landscape? Such tortured language soon becomes disturbingly normal.

But however vacuous the bizarre parlance is, it offers a glimpse into some of the inner workings of capital’s hegemonic efforts. Ideological and material work fixes and depoliticizes the assumption that capital is always the best guide to assessing the viability of solutions to the climate crisis and it’s therefore reasonable to turn to the masters of the craft, such as AVPN’s member corporations and foundations, for direction. We circumvent environmental catastrophe by following the likes of Coca Cola, Cargill Tropical Palm Holdings, and fossil fuel investors HSBC and Standard Chartered.

Far better in this case then for charity to begin at home, but the launch event didn’t offer much promise. A spokesperson for the International Finance Corporation spoke persuasively about the potential of solar energy but omitted the IFC’s continued support for dams — sorry, “sustainable hydropower” — which dwarfs any interest in solar in Myanmar,. There was nothing about halting logging and the mass conversion of land into oil palm and rubber plantations in the country’s south, nor those that facilitate its investment.

Nor was this, predictably, an opportunity to discuss alternative economic paths to shared prosperity, food security and ecosystem preservation. It probably wouldn’t have made much sense, yet it’s precisely the common sense wrapped up in Myanmar’s multiple struggles for environmental justice that needs to prevail over the utopian, destructive fantasies of capital.