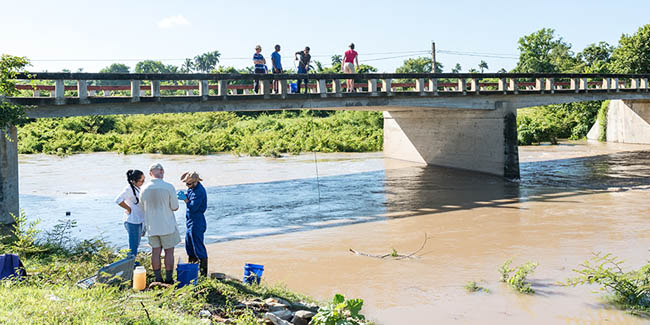 At a bridge in central Cuba, near the city of Cienfuegos, a team of Cuban and U.S. scientists collect water. They explored twenty-five Cuban rivers and found little damage after centuries of sugarcane production.

by Joshua A Brown
University of Vermont

When the Soviet Union disintegrated in the early 1990s, food production on the island of Cuba was reduced—as the supply of Russian fertilizers, pesticides, tractors, and oil dried up. Under the stress of an imminent food crisis, the island quickly rebuilt a new form of diversified farming—including many urban organic gardens—that depended less on imported synthetic chemicals. Over the last two decades, Cuba blossomed into a worldwide model for conservation agriculture, with improved soils and cleaner water.

At least that’s been a popular story among journalists.

Now—for the first time in more than fifty years—a team of Cuban and U.S. field scientists have worked together to rigorously test a key aspect of this story: the impacts of contemporary agriculture on water quality in Cuba’s rivers. Despite centuries of sugarcane plantations and other intensive farming, the international team discovered that none of the rivers they explored show deep damage.

Instead, the scientists measured much lower nutrient concentrations in all of the twenty-five Cuban rivers they studied than are found in the U.S.’s Mississippi River. And they think Cuba’s transition toward sustainable agriculture—and its reduced use of fertilizers on cropland—may be a primary cause.

“A lot of stories about the value of Cuba’s shift to conservation agriculture have been based on fuzzy, feel-good evidence,” says University of Vermont geologist Paul Bierman, who co-led the new research. “This study provides hard data that a crucial part of this story is true.”

The new study, “¡Cuba! River Water Chemistry Reveals Rapid Chemical Weathering, the Echo of Uplift, and the Promise of More Sustainable Agriculture,” was published January 30, in the early online edition of the journal GSA Today, the leading publication of the Geological Society of America.

The scientists from both countries worked side-by-side as one team doing extensive fieldwork—with support from the U.S. National Science Foundation—and then coordinated lab work and analysis to look at many measures of river water across central Cuba. The team found high levels of E. coli bacteria in the waters—likely the result of large numbers of livestock and Cuba’s intensive use of horses and other draft animals for transportation and farm work.

However, the scientists also found much lower levels of phosphorus and nitrogen pollution in Cuban rivers than in the United States where intensive farming and chemical fertilizer use is widespread. The new study shows dissolved nitrogen levels in Cuban rivers running at roughly a quarter to a third of those found in the Mississippi River—where excess nitrogen is a primary engine of the dead zone in the Gulf of Mexico.

“This research can help us to better understand how land and rivers interact in the context of sustainable organic agriculture,” said the CEAC’s Rita Yvelice Sibello Hernández, “and may give a good example to other people in the Caribbean and all over the world.”

Cuba is a motorboat trip from Florida—less than a hundred miles. And the island nation is the most populous in the Caribbean with more than 11 million citizens and a long and tortuous history of complex relations—cooperation and conflict—with the United States. But there has been vanishingly little collaboration between U.S. and Cuban scientists since the 1960s—much less than with other, more-potent geopolitical foes of the United States, from Iran to China.

“We have much to learn from each other,” says Cuban scientist Alejandro Garcia Moya, a co-author on the new study. The kind of river data that the team collected “are needed to guide sustainable development in Cuba, and by example, in other tropical and island nations,” the team writes. Not only did the U.S. team provide important technical expertise and verification of results—but the joint research reveals that Cuba also has a lot of opportunity to improve its river water quality.

The new study points toward the need for improved management strategies to reduce animal manure and sediment loads going into rivers—such as fencing to keep cattle off river banks—that “could further and rapidly improve central Cuban river water quality,” the scientists note.

Fertilizer use in Cuba peaked in 1978 and has been lower since, according to World Bank and other data. U.S. fertilizer use spiked after the 1960s and has remained at more than twice the Cuban use rate.

“There’s a takeaway we bring back to the U.S.: our river waters do not need to look the way they do,” says Paul Bierman—a professor in UVM’s Geology Department, Rubenstein School of Environment and Natural Resources, and Gund Institute for Environment—“we can manage fertilizer differently.”

There are, of course, complex questions about yields, farm policy and more, but this newly reported data on the low levels of nutrient pollution found in twenty-five Cuban rivers, “suggests the benefits of Cuba’s shift to conservation agriculture after 1990,” the U.S./Cuban team writes, “and provides a model for more sustainable agriculture worldwide.”