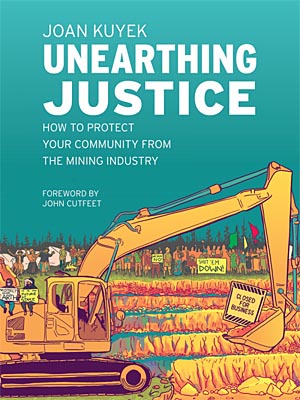 Richard Fidler is a member of Solidarity Ottawa and of Québec
solidaire. He blogs at Life on the Left.

Joan Kuyek
UNEARTHING JUSTICE
How to Protect Your Community from the Mining Industry
Between the Lines,  2019

“The mining industry continues to be at the forefront of colonial dispossession around the world. It controls information about its intrinsic costs and benefits, propagates myths about its contribution to the economy, shapes government policy and regulation, and deals ruthlessly with its opponents.

“Brimming with case studies, anecdotes, resources, and illustrations, Unearthing Justice exposes the mining process and its externalized impacts on the environment, Indigenous Peoples, communities, workers, and governments. But, most importantly, the book shows how people are fighting back. Whether it is to stop a mine before it starts, to get an abandoned mine cleaned up, to change laws and policy, or to mount a campaign to influence investors, Unearthing Justice is an essential handbook for anyone trying to protect the places and people they love.”

So reads the announcement by MiningWatch Canada, the Ottawa-based mining watchdog organization founded in 1999 with Joan Kuyek as its first full-time staff person. In this book, Kuyek brilliantly combines her extensive knowledge of the mining industry and its sweeping control of government policy with the valuable lessons she and her colleagues have learned in fighting environmental depredation and community disruption by the industry, starting with the 30 years she spent as a community activist and organizer in the Ontario mining centre of Sudbury.

As Kuyek reports, Canada is a world mining power. Its two key stock exchanges, the TSX and TSX Venture account for almost 20 percent of the total mining equity raised globally.

“In 2015, the TSX and TSXV listed 57 percent of the world’s publicly traded mining companies, which together traded more than $148 billion of equity; 32 percent of the total number of mining and exploration companies in the world were headquartered in Canada.

“According to Natural Resources Canada, Canadian mining companies operate in more than one hundred countries around the world. In 2017, Canada had $62.6 billion worth of mining investment abroad. Its exports in minerals and metals reached $91.7 billion in 2015, 56 percent of this to the United States.”[1]

According to the Mining Association of Canada, the industry employs more than 426,000 workers across the country in mineral extraction, smelting, fabrication and manufacturing, and indirectly employs an additional 206,000. Canada ranks in the top five countries in global production of 16 major minerals and metals.[2]

The industry benefits from Canada’s taxation and royalties regimes, which are among the most lax in the world. Abroad, Canadian mining companies are protected and promoted by the “economic diplomacy” practiced by Ottawa’s embassies and financed by Canadian banks and the federal government’s Export Development Corporation.

Kuyek describes and analyzes all aspects of the industry: its structures and financing, its social and environmental impact, the role of Canadian laws and regulations in furthering mining investment, and Canada’s international mining presence now coming under increasing challenge in Latin America and Africa.

Special attention is given to the industry’s “ecological economics.” Kuyek documents how mining companies consistently ignore or underestimate the social and environmental costs of mining operations, the “externalities” not covered by profit and loss accounting of projects. “One of the places where ecological economics becomes strategically important,” she writes, “is in environmental assessment — the government process of looking at environmental effects before it licenses large projects to proceed.” She lists many of the crucial questions ignored by classical economics, and cites a growing movement to enlarge the system of public accounts to keep track of the depletion of natural capital, and the health of the people, the cultures, and the social services of our communities.” At the same time, she recognizes the limitations of this approach.

“Ecological (or social or Gaian) accounting is the development of ledgers for projects that measure the estimated real impacts of the activity on the individual, the household, the community, and the ecosystem. There is a serious risk to putting an economic value on nature, given how the dominant economy is capable of making everything a commodity. Any economic valuation of ecological services is going to be inaccurate. Such things are priceless and cannot be adequately compensated for once lost.”

Throughout, Kuyek illustrates her account with vivid examples drawn from the struggles of communities, many of them Indigenous, to stop prospecting on their lands or limit the damages resulting from the installation, operation, and closing of mining ventures.

Especially valuable is a final chapter proposing ways to “put mining in its place.” Among the many suggestions she offers, a key regulatory proposal is to force mining firms to pay the full monetary costs of their extraction of metals and gems. Although, as Kuyek said above, that alone cannot compensate the full cost to nature and human society, she maintains that “Forcing companies to internalize even some of their costs will make most mines uneconomic.”

More fundamentally, she says, “We all want stable economies that heal the environment and do not pollute the waters, land and air.…We want livelihoods that sustain the planet and communities.”

“[Mining] is a short-term, waste management industry with long-term consequences. It is not sustainable; it depletes the very resources upon which it depends. We need to reduce our consumption of metals, conserve, reuse and recycle them. We do not need more gold, silver, uranium, coal or diamonds. Only as a last resort, should we contemplate new mines. And those mines should be created in the most cautious way possible.”[3]

Also important are measures to help employees to “move from the extraction economy to a sustainable one….” Kuyek notes that out of the hundreds of thousands of workers employed in Canadian mining, only a relatively small proportion are working in actual mining and quarrying, and a smaller number are in scrap metal recycling. “Shifting from extraction to reusing and recycling would be unlikely to jeopardize the downstream jobs in smelters, refineries, or manufacturing.”[4]

Surveying the activities of MiningWatch and other organizations working in solidarity with mining-affected communities, both in Canada and abroad, Kuyek says that for her, “our experience raises more questions than it provides answers….

“How might we resist getting caught in the bureaucratic management wheel, and have more control over the process? How can organizations like MiningWatch best use their scarce resources? How do we reconcile the demands from communities that want us to rein in Canadian mining companies, with demands from movements—like that in El Salvador—to stop all large-scale mining? Should we resist reducing the ‘ask’ and instead make the demands of our government more profound and inspiring?

This book is an outstanding contribution to that movement, a vital addition to every activist’s library. Read it, and apply its lessons.